China to join Pakistan blast probe, backs away from calling it ‘bomb attack’ 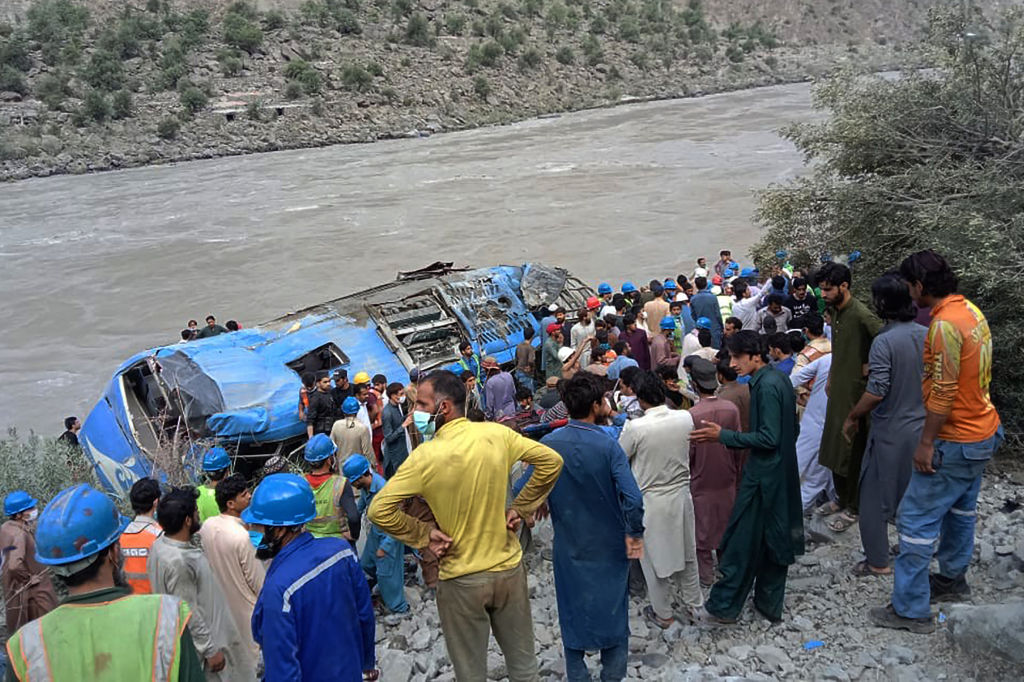 Rescue workers and onlookers gather around a wreck after a bus plunged into a ravine following a bomb explosion, which killed 13 people including nine Chinese workers, in Kohistan district of Khyber Pakhtunkhwa province on July 14, 2021. (Photo by STRINGER/AFP via Getty Images)

CHINA said on Thursday (15) it will send a team to Pakistan to help investigate a blast on a bus that killed 13 people, including nine Chinese workers.

Beijing, however, backed away from an earlier assertion that the explosion was a bomb attack.

Zhao Lijian, a Chinese foreign ministry spokesman, told a regular briefing that China would cooperate closely with Pakistan in the investigation.

Wednesday’s (14) blast sent the bus crashing into a ravine in Khyber-Pakhtunkhwa province in northwest Pakistan, where Chinese engineers have for several years been working on hydroelectric projects as part of Beijing’s massive Belt and Road Initiative.

China is a close ally and major investor in neighbouring Pakistan but various anti-Pakistani government militants have in the past attacked Chinese projects.

Zhao had on Wednesday (14) called the blast a “bomb attack” but Pakistan said a “mechanical failure” caused a gas leak that led to the explosion.

Senior Chinese diplomat Wang Yi met Pakistani foreign minister Shah Mahmood Qureshi and urged Islamabad to investigate the blast but he stopped short of calling it an attack, according to a post on the Chinese foreign ministry’s website.

But Wang told Qureshi that if it was indeed a “terrorist attack”, Pakistan should immediately arrest the culprits and “punish them severely”.

Wang, who is China’s state councillor and foreign minister, said “lessons should be learned” and both sides should strengthen security measures for China-Pakistan cooperation projects to ensure their safe and smooth operation.

The Chinese workers killed on the bus were employed at the Dasu hydroelectric project, part of the China-Pakistan Economic Corridor (CPEC), a $65 billion (£46.9b) investment plan aiming to link western China to the southern Pakistani port of Gwadar.

Wang and Qureshi spoke in Dushanbe, the capital of Tajikistan, on the sidelines of a foreign ministers’ meeting of the Shanghai Cooperation Organisation.