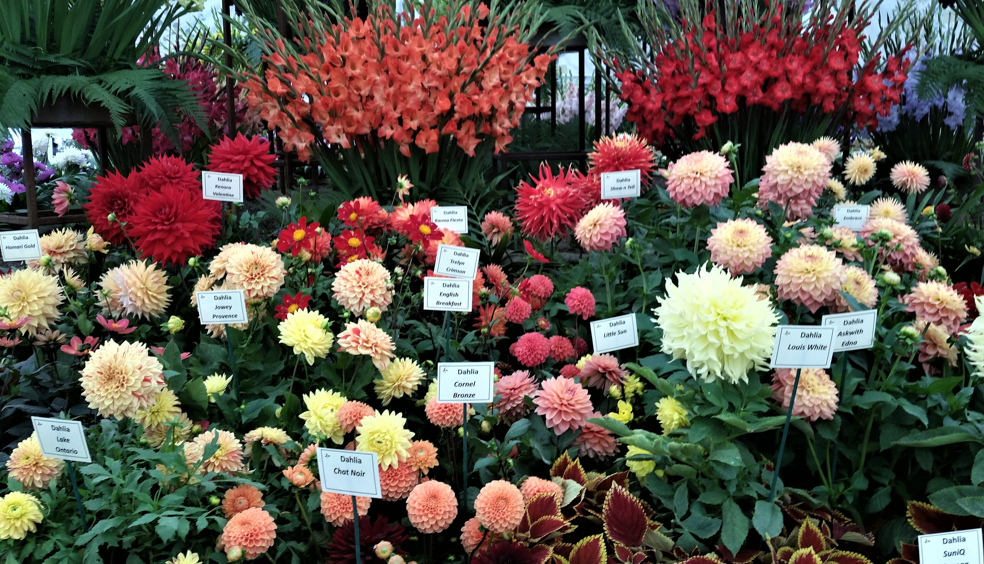 WHEN it comes to gardening, Guy Barter, from the Royal Horticultural Society, seems to know everything about everything. He is, after all, the RHS’s chief horticulturist, but found time to chat to Eastern Eye during this year’s hectic Chelsea Flower Show (September 21-26), the first time it has been held in the autumn instead of May.

Last year’s show was cancelled – a first since the Second World War. There is a profusion of blooms to delight the eye – everything from dahlias to chrysanthemums, fuchsias, clematis, alliums and much else. There is even a giant pumpkin. One “master grower”, Chris Smith of Pennard Plants, was offering a wide variety of tomato (“Big Boy is not easy to grow”) and aubergine seeds.

“Where I live in Woking, there’s a very large subcontinental population and their allotments are crammed with Asian herbs and vegetables during the summer. Herbs like fenugreek which I think is called methi.”

Many of these herbs, he says, “can be quite easily grown at home. If you’ve got a sunny patio, coriander and basil and things are very easy and cheap to grow. The seed is widely offered and very inexpensive. And if you can’t find the seeds (in garden centres) then seeds from an Asian greengrocer will often grow.”

Carrots, onions and garlic, “are perfectly hardy and very easy to grow in Britain. Tomatoes, aubergines, peppers, chillies and those south Asian cucumber family plants, they do need a lot of warmth. You need a greenhouse or polythene tunnel. And that gives just the right amount of warmth in Britain up to about the level of, say, Nottingham or Leicester, to grow subtropical vegetables in the summer.”

To Asians thinking of taking up gardening, he says: “Gardening is a wonderful hobby, it’s very rewarding. And it’s something that you can do on a small or large scale. It’s a personal and private thing, no one’s going to come and scoff at you if your plants fail. Everyone’s plants fail now and again, you’d pick up and start again. I’ve been gardening for 50 years or so. And I still have failures every now and again. That’s just the way it is when you’re dealing with living things. You get all the benefits and pleasure of growing the plants, you also end up with some tomatoes or cut flowers. It’s rewarding on many levels.”

He mentions houseplants which “have become incredibly popular. And one of the things about houseplants becoming incredibly popular is that far more are sold now, many more interesting ones. So, there’s a really good selection – often they’re not that expensive. You start with small ones and let them grow. You can develop your skills at the same time as developing your plants. Also, so many young people can’t afford their homes now. They have to live in rented accommodation and can take potted plants with them from house to house.”

On the change in seasons, he says: “There’s a lot of gardening to be done in autumn. If you grow potatoes, you’re harvesting your potatoes at the moment. Similarly, things like carrots and onions, you’d be harvesting. Very shortly you will be planting. Garlic is always best planted in November. Shallots and other onion family things can also be planted in the autumn. But you can have another go in spring as well, in February, March, April.”

“Young people have taken up gardening a lot. They’ve usually taught themselves, some from YouTube and things on their iPhone,” he laughs.

Holding the Chelsea Flower Show in autumn has meant the character of what is on display “is completely different. In the spring, we have daffodils, tulips, roses, and peonies. Those things don’t grow terribly well in late summer. So, we have a completely different set of plants.”

He explains: “The Chelsea Flower Show is the flagship of the British gardening industry and hobby and a huge amount of our interest revolves around new plants that are introduced. Garden designers show off the best concepts, nurseries show the best plants. It’s the standard that everybody aims for, you know what’s achievable with some difficulty. It’s the kind of thing that inspires and informs us. We look forward to the Chelsea Flower Show enormously. We’ve got another show lined up for spring.”

One of Barter’s responsibilities is looking after special projects that include “developing gardens for our National Health Service site”.

There is a RHS Garden of Hope for sick mothers and babies. “After the show finishes, it’s all going to be dug up and carried off and reinstalled in Kent, where we hope it will last many years, bringing solace and comfort.”

Plants, he says, “give comfort to everybody, though obviously some people have a greater need than others. There’s lots of scientific research to prove that greenery and green space makes people feel better. Also, there’s that sense of actually doing things when you’re nurturing something, you’re doing things with your hands, all of which are known to be very therapeutic.”

In Britain, “the climate is such you can grow a very wide range of plants. (But) the evidence suggests the climate has changed and is changing. The growing seasons are getting longer. The growing season in Britain is the time between the last frost in the spring and the first frost in the autumn. We are also tending to get milder winters, but those winters tend to have a lot of downpours so that water logging can be an issue in some gardens. The summers seem to be having more heat waves, hot dry periods. So, you have to bear that in mind when you’re planting things that are vulnerable to dry weather.”

In fact, this year, the RHS has come up with an urgent list of achievable actions for gardeners” for its new “Planet-Friendly Gardening Campaign”.

The UK’s 30 million gardeners can apparently help Alok Sharma, president of COP26, who is hosting November’s critical climate change conference in Glasgow: plant a tree; switch from “mains to rains”; plants for pollinators; pull up a paving slab (this is particularly relevant for Asians with paved front gardens to park his/hers Mercedes); grow your own bunch of flowers; and eat more home-grown, UK, local and seasonal fruit and vegetables.

Sue Biggs, RHS director general, says: “RHS Chelsea offers an international platform for the RHS COP26 Garden, one of the first actions of the new Planet Friendly Gardening Campaign. This will demonstrate to millions how our gardens, plants and public green spaces can play an integral part in protecting biodiversity, our planet and people and ensure a greener, more resilient future for us all.”