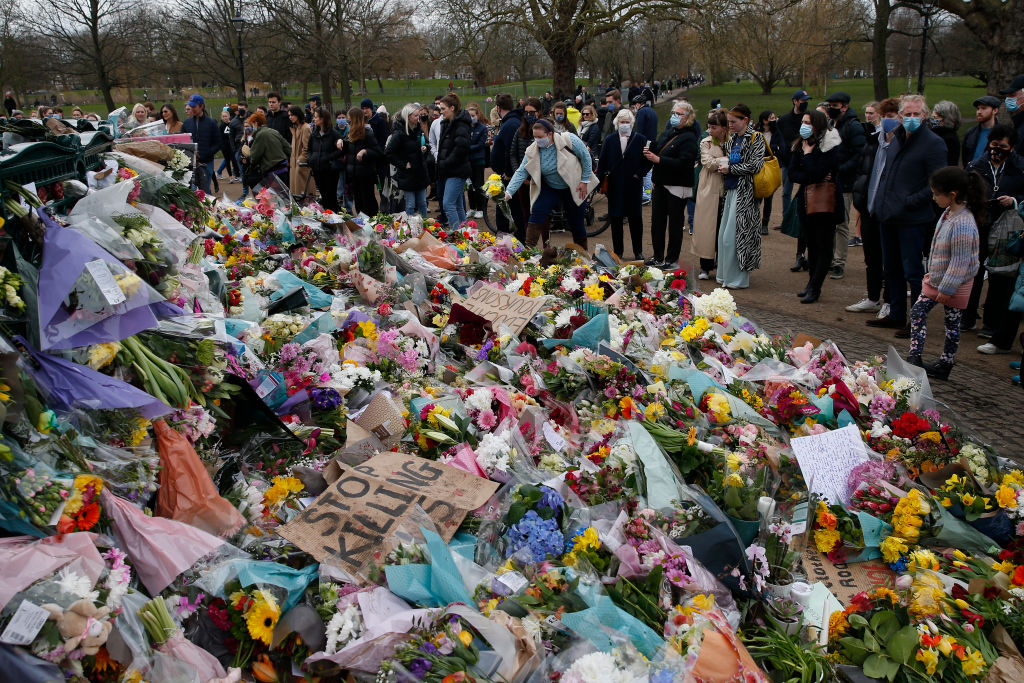 People gather to pay their respects on Clapham Common, where floral tributes have been placed for Sarah Everard on March 14, 2021 in London, England. (Photo by Hollie Adams/Getty Images)

THE kidnap and murder of Sarah Everard in London on March 3 this year has been a landmark tragedy, similar in some ways to the fatal gang rape of a 23-year-old medical student in Delhi on December 16, 2012.

Both cases triggered national vigils by women and demands for safer streets. In the latter, the victim has not been officially named, but out of five people arrested for that crime, one committed suicide in prison, an underage youth was released after serving three years in custody and three men went to the gallows. But women are no safer in India.

What is horrifying in the Everard case is that a senior Metropolitan Police officer, Wayne Couzens, pleaded guilty to her kidnap, rape and murder and disposal of her badly burnt body in a builder’s bag in woodland in Kent.

He was a member of Scotland Yard’s elite Parliamentary and Diplomatic Protection Command, whose job was to protect the US embassy as well as the royal family. He was authorised to carry a firearm and had previously guarded Britain’s nuclear plants.

On the surface – as the father of two young children – Couzens appeared a devoted family man.

But a couple of tell-tale signs were not picked up. In 2015, he had curiously driven naked from the waist down. And three days before he kidnapped Everard from the streets of Clapham in south London, he had exposed himself at a McDonald’s drive-through restaurant. He was questioned by police, but no further action was taken.

The head of Scotland Yard, Dame Cressida Dick, acknowledged: “All of us in the Met are sickened, angered and devastated by this man’s truly dreadful crimes. Everyone in policing feels betrayed.”

Jess Leigh, from Our Streets Now, told the BBC Radio 4’s Today programme last week: “It kind of really pains me to say that nothing much has changed really in the sense of law and legal battles. Public attitudes are changed in the sense that now more men know that these crimes take place. But it should never have taken a woman to die for anything to change.

“We want to see a bill introduced to criminalise public sexual harassment. Street harassment is quite shocking in this country. You can get fined for dropping a cigarette. But you can shout horrific, awful things at girls and women and there would be absolutely no repercussions.”

Back in India, harassment of women in public, which is all too common and a lot worse, is dismissed as “eve-teasing”.

In the UK, the question is whether Couzens is a one-off or are there other police officers like him hiding in plain sight?

Reflections on ‘the beautiful game’

Three black players in the England team – Marcus Rashford, Jadon Sancho and Bukayo Saka – missed penalties in the final against Italy at Wembley last Sunday (11) night and were subjected to racist abuse as a consequence.

There is an easy way to ensure this kind of behaviour does not recur. There should be a rule banning black players from taking a penalty again. Better still, the England team should be all white, as it was in 1966 when it won the World Cup.

To be serious, the abuse has been widely condemned. Prince William, president of England’s Football Association, spoke for many when he said: “I am sickened by the racist abuse aimed at England players after last night’s match. It is totally unacceptable that players have to endure this abhorrent behaviour. It must stop now and all those involved should be held accountable.”

Curiously, I can understand the fury of fans whose emotions were manipulated to a frenzy by sections of the media which convinced millions that this time, “football was coming home”.

The penalty shootout could easily have gone against Italy, but when England lost, there was a sense of betrayal for which the black players were held responsible.

To be sure, there are black players in the side, but to many, the success of the team was the triumph of a white England.

There are features of footfall I will never understand. Why do England, Scotland, Wales, and Northern Ireland have separate sides if they are all part of a United Kingdom? This is historical, I know, but shouldn’t the UK play as a team in something that arouses as much emotion as international football? It is almost war by other means.

I don’t think we should lose a sense of perspective. Yes, there is racism, but the UK as a whole is not as racist as it is being made to be. For one thing, a large proportion of professional players at the highest levels of the game are now black. That won’t be reversed.

Those who abused the black players have their counterparts among those leading the campaign against anything they consider “woke”. It is worth pointing out that the opposite of woke is racist.

This is a salutary lesson I pass on to readers on mistakes to avoid when using a car park – whatever you do, don’t use an old ticket.

To briefly recap, I used the London Bridge NCP on July 6 from 10.55am to 12.52pm. I fed the ticket in when exiting the car park, tapped my debit card on the reader and left. It was only at midnight that I looked at the receipt and got a shock – I had been charged £643.20.

The man I got through to in customer relations at that time of night suggested I had probably used an old ticket. This was exactly what I had done.

I was advised to pay at a side machine, which I did –it gave me my receipt as well as returned the ticket, which foolishly I retained.

In desperation, I turned to Michelle McCarthy, at the NCP’s Voicebox Public Relations, who understood my predicament and had the problem sorted out within a couple of hours. She wins my “press officer of the year” award.

NCP refunded £643.20 minus, of course, £6.40 for parking on July 6. It makes me wonder what other mistakes I make when I am in a hurry. It pays to glance at receipts – which, like most people, I hardly ever do.

The former president of the Royal Society, Prof Sir Venkatraman Ramakrishnan, once told me that using face coverings should be as automatic as putting on a seat belt when driving a car.

I noticed on buses and trains, some people were refusing to wear masks even when it was compulsory to do so. When the legal requirement is dropped, we can safely assume many more will refuse to wear a mask as a matter of principle.

They will simply ignore government advice to “behave responsibly”. What is in prospect is a fourth lockdown in winter.