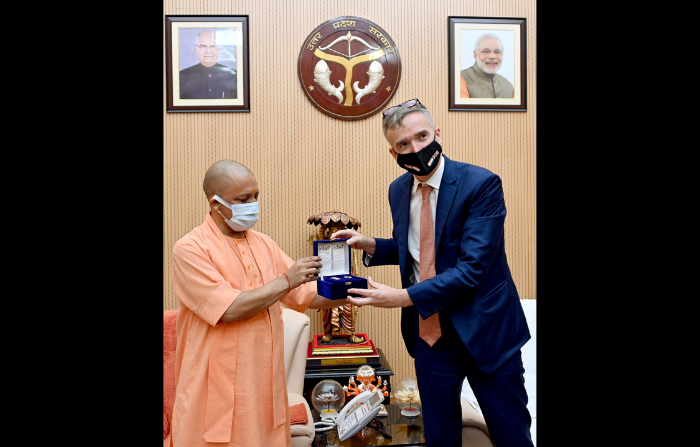 Alex Ellis, the British high commissioner to India, recently stormed the headlines on social media by showcasing the foodie in him. The diplomat, who took charge earlier this year, has been trying Indian food and flavour across the country and the internet can’t stop discussing him.

After tasting masala dosa, a south Indian food, Ellis was seen trying vada pav, a popular snack in the western Indian state of Maharashtra which consists of deep-fried potato dumplings placed inside a bread burn and is consumed with raw chilly.

Ellis is currently in Mumbai, the capital of Maharashtra, where he is meeting top state government officials and political leaders. He found time out from his busy schedule to grab a vada pav and posted a picture of him with one in front of the city’s iconic Gateway of India.

“There’s always time to have a vada pav in Mumbai,” Ellis said in the post and finished it with the Maharashtrian term “lai bhari” which means excellent.

There's always time to have a #vadapav in Mumbai – लई भारी! pic.twitter.com/Xv6Hu4iW2X

The tweet received more than 21,000 likes at the time of writing this report besides scores of interesting reactions. Even the US consulate in Mumbai advised Ellis about the address to get the best Maharashtrian food in town.

Some social media users asked the British high commissioner to try unique food that India’s other towns offer, like rasgoolla (sweet) in Kolkata in the eastern state of West Bengal. There were others who mocked Ellis saying he could have a tough time in the toilet the next day after having vada pav.

Tomorrow morning in toilet he will be like.. pic.twitter.com/2BwJbFWScT

Welcome sir,come to Kolkata for rosogolla

One social media user asked Ellis to have vada pav near Dadar railway station in Mumbai and not in a five-star hotel.

Real taste of Vadapav is opposite Dadar station. Gallery of Taj is not right place to have Vadapav 😃

Another user thanked Ellis for showing interest in speaking an Indian language.

After looking at your interest of speaking Hindi ,Marathi I wanted to say thank you sir for your kind gesture, respect towards our regional languages. खूप खूप आभारी आहे.