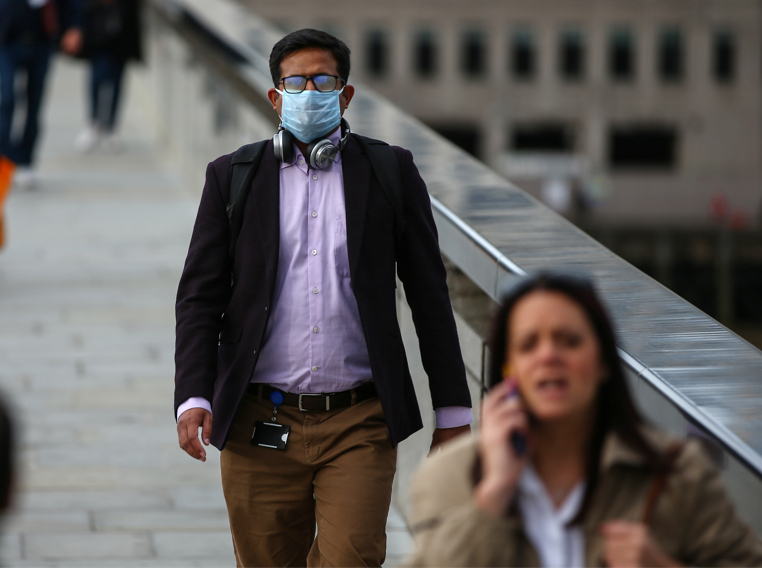 BRITISH Indian workers are now dominating the finance industry in the UK, official figures have revealed. Some 20.5 per cent of employees of Indian origin are in the banking or financial sector, the highest proportion of any group.

The figure was 14.6 per cent for those of Pakistani or Bangladeshi origin and 17.4 per cent for white people.

The data also showed that south Asians make up the highest proportion of staff in the transport and communication sector. Workers at train, bus or telecoms companies from an Indian background account for 17 per cent of staff, while people of Pakistani or Bangladeshi heritage made up 17.8 per cent, according to the Office for National Statistics (ONS) data.

In the transport and communication sector, the figure dropped to 8.4 per cent for white staff and 9.7 per cent for those from a black background.

Atul Bhakta, CEO of logistics firm One World Express, believes the pandemic has led to the rapid digitisation of the transport and communications sector, creating attractive career opportunities.

He told Eastern Eye: “Figures suggest that the number of sector vacancies could increase by 800,000 within the next decade.

“And given the wide range of roles now available, interest has been sparked among applicants with more diverse backgrounds, including people from Indian, Pakistani and Bangladeshi communities.

“The variation of backgrounds and experiences will bring different ideas and perspectives to resolving issues, thereby minimising group think.”

The Communication Workers Union said that out of its total membership of 188,000, ethnic minorities account for nine per cent.

Bhakta added: “However, the UK must not be complacent. These figures mark a positive start in improving diversity in the workforce, but more must still be done.

“Accountability and transparency within recruitment processes will ensure that management teams continue to build diverse workforces. The constant re-evaluation and updating of organisations’ employment policies and reporting will be vital in ensuring sector progress does not plateau, as will committing to diversity targets.”

However, diversity in the top jobs remains a problem in the finance sector. More than half of FTSE 250 companies failed to mention ethnicity in their board diversity policy, research from the Financial Reporting Council found last year. And most of the FTSE 350 do not set measurable ethnicity targets.

The research also found that while 11 per cent of FTSE 100 and four per cent of FTSE 250 companies plan to increase ethnic diversity, most focused on general progression rather than senior management.

To improve diversity, an independent review recommended each FTSE 100 board should have at least one BAME director by 2021, and by 2024 for FTSE 250 firms.

Lord Rami Ranger CBE, founder of the Sun Mark brand, highlighted the growth of the Indian female workforce in the finance sector.

He told Eastern Eye: “The majority of Indian women go out to work and as a result, families have two incomes.

“The extra income helps them to invest in their children’s higher education more than those with a higher number of children with just one income.

“This is what helps Indian children to acquire higher education, to become high achievers in society.

“More important, women who go out to work have more worldly knowledge to share with their children than those staying at home for cultural reasons.

“The report is clear proof that women empowerment is a prerequisite for a prosperous and progressive family.”

Other findings in the ONS data were the Pakistani and Bangladeshi ethnic group had a higher percentage of workers in the distribution, hotels and restaurants sector than any other ethnic group at 30.7 per cent.

In public administration, education and health sectors, British Indians made up 26.8 per cent of the workforce compared to 30.1 per cent of those whose ethnicity is white and 43.6 per cent among black people.

Meanwhile, according to Barclays bank’s diversity and inclusion report 2020, Asians made up 14 per cent of its UK workforce.

Jaffer Kapasi, who runs an accountants and business advisory firm in Leicestershire, said: “With the decline in retail and wholesale sectors overtaken by online shopping, people of Indian origin have now moved to banking and financial sectors.

“Number crunching is in the genes of many south Indians and also Gujarati communities.

“Employment in the finance sector is going to expand as many of the indigenous communities prefer other professions.

“Modern technology, coupled with cloud computing and home working, will encourage more to participate in this sector.”

Rubina Patel*, 31, a British Indian finance worker for seven years, said she has seen mathematics-based roles assigned to British Indians. She added: “I remember being an undergraduate passing by Canary Wharf –the tall buildings, the busy and lit streets, people in suits all caught my attention.

“I always had a dream to work in one of those offices, for me it felt like I would have made it. It always seemed like the people that worked there had important jobs and were successful.

* Name has been changed to protect identity.