A delegation of Odisha Tourism led by some of the state’s top leaders and bureaucrats besides the Indian high commissioner to the UK were present at what is known as one of the world’s biggest travel shows. 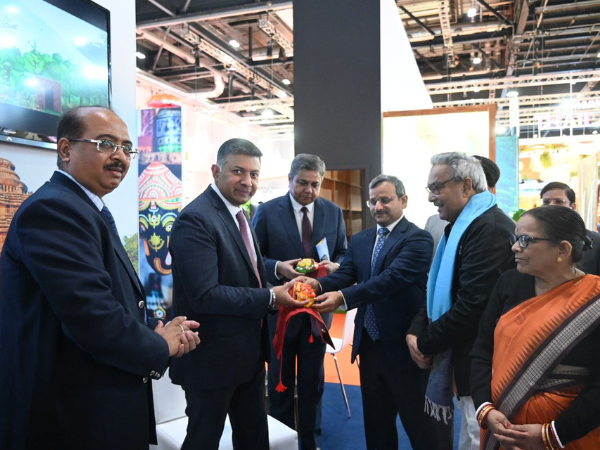 A delegation of Odisha Tourism led by Ashwini Kumar Patra, the eastern Indian state’s tourism minister; and Suresh Chandra Mahapatra, its chief secretary, on Tuesday (8) took part in the World Travel Market (WTM) which is currently underway in London.

The three-day global travel show which kicked off on Monday (7), is taking place at ExCeL in the national capital, and more than 2,500 exhibitors from more than 100 nations have participated in it. The Odisha Tourism stand at WTM 2022 has garnered rave reviews with a focus on promoting eco-tourism, handicraft, and handlooms from the state on a global stage, a press release from the Federation of Indian Chambers of Commerce and Industry, UK, said.

On Monday, the Incredible India Stand was inaugurated at the event’s inaugural session in the presence of Patra; his counterparts from Puducherry and Tamil Nadu — K Laxminarayanan and M Mathiventhan, respectively; Mahapatra; India’s tourism secretary Arvind Singh; Odisha Tourism director Sachin Ramchandra Jadhav; Indian high commissioner to UK HE Vikram Doraiswami; among others.

Speaking on the occasion, Patra said, “It is a matter of great pride to see the Odisha Flag flying high in WTM 2022. Tourism in Odisha is achieving new heights under the visionary leadership of hon’ble chief minister of Odisha Shri Naveen Patnaik. The participation of Odisha Tourism in WTM London 2022 has ensured the presence of brand Odisha on the international stage, and this will help in promoting the world-class tourism infrastructure of Odisha in the international level.”

The WTM was last held in 2019 due to Covid-19 pandemic and since it is taking place after a gap of three years, exhibitors have been found to be enthusiastic about promoting themselves internationally through the show.

The participation of Odisha Tourism in WTM 2022 has received positive feedback from India’s tourism and travel fraternity owing to its efforts towards pitching Odisha as a leading tourism destination in the country with its niche tourism products, the press release said.

India’s G20 presidency expected to give tourism a boost

India’s G-20 presidency, which is starting in December, is also expected to give the tourism sector an unparalleled opportunity to highlight the country’s unique offers on a global stage.

“The theme of this year`s exhibition is ‘The Future of Travel Starts Now’,” the Indian high commission in London said ahead of the launch of the India Pavilion by HE Doraiswami on Monday.

“With the reopening of the country to foreign tourists, after a gap of almost two years, this year’s participation of India is particularly significant. After the world’s largest vaccination drive, the country is ready for international tourists and India is participating in WTM 2022 to showcase itself as a preferred destination for tourism,” it said.

The India Pavilion was launched to showcase a diverse range of tourism products and services that are on offer in the South Asian nation.

Besides Odisha, Puducherry, and Tamil Nadu, tourism ministers from other Indian states such as Kerala, Karnataka, and Maharashtra were also present at the India Pavilion launch at ExCeL.

Cultural performances, yoga sessions, henna painting, and Bollywood dances were among the activities that were held at the event.