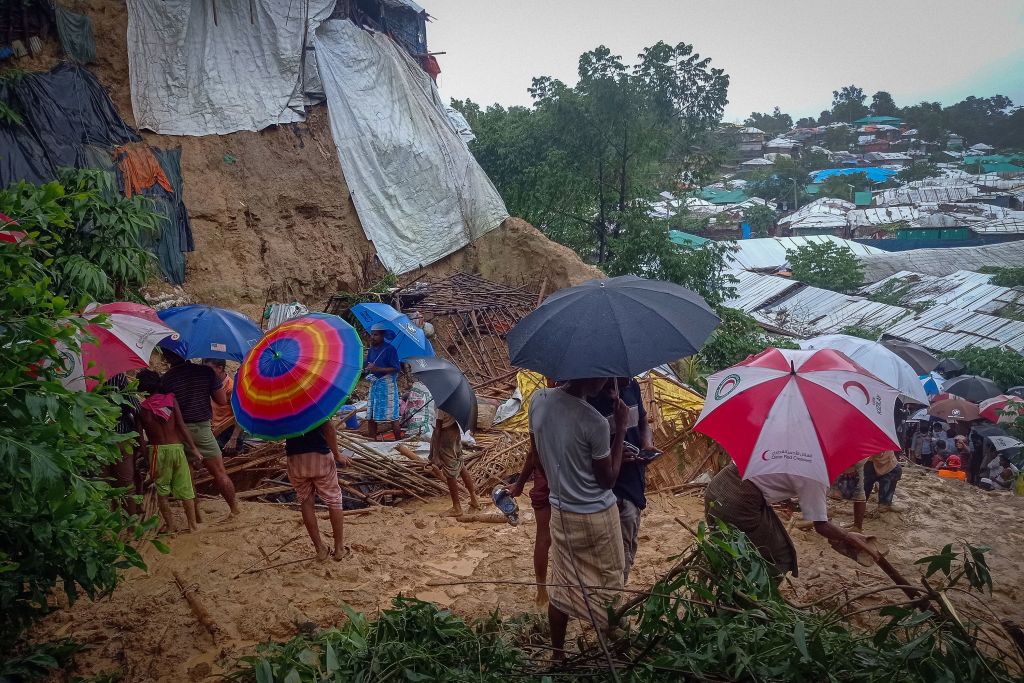 Onlookers stand as Rohingya refugees work amid the debris of houses in Balukhali camp on July 27, 2021 that were damaged after monsoon rains triggered landslides and flash floods in the hilly settlements in Bangladesh. (Photo by TANBIR MIRAJ/AFP via Getty Images)

BANGLADESH has evacuated 10,000 Rohingyas from around refugee camps on the Myanmar border after monsoon landslides and flash floods killed at least 14 people, officials said on Wednesday (28).

After three days of torrential rain, the refugees, most of whom fled a military crackdown in Myanmar in 2017, were moved from hilly slopes around the Balukhali camp in Cox’s Bazar, refugee commissioner Shah Rezwan Hayat said.

Tens of thousands of Rohingyas who could not find room in the camps have cleared forests on the surrounding hills and set up shelters that have since been met with landslides every monsoon season.

“We have brought some 10,000 Rohingyas to safe places after their shelters were hit by heavy rain and landslides,” Hayat said.

At least six Rohingya are among the dead and several others were injured, officials said. The other dead are local villagers whose homes were buried.

Cox’s Bazar district, where more than 850,000 Rohingya refugees are packed into 34 camps, has recorded more than 27 centimetres (10 inches) of rain since Monday (26), according to weather authorities.

About 7,000 local people outside the camps have also been moved to safety, officials said.

Mohammad Salam, a 30-year-old Rohingya, his wife and three children were among those moved.

“My house collapsed yesterday. I don’t have anything. I have three children and they have started having fevers,” Salam said.

The United Nations refugee agency said 2,500 shelters housing 12,000 Rohingyas have been affected by the floods.

“We are also aware of damage to facilities including health centres,” Hannah Macdonald, a UN spokesperson, said.

Aid workers said a coronavirus lockdown in the camps, following a major spike in cases, has affected rescue work as authorities have halted what they consider non-essential visits.

About 740,000 Rohingya fled Rakhine state in Myanmar after security forces launched a clampdown in 2017 that the UN has said may amount to genocide.