The fire has been largely reined in but not entirely extinguished 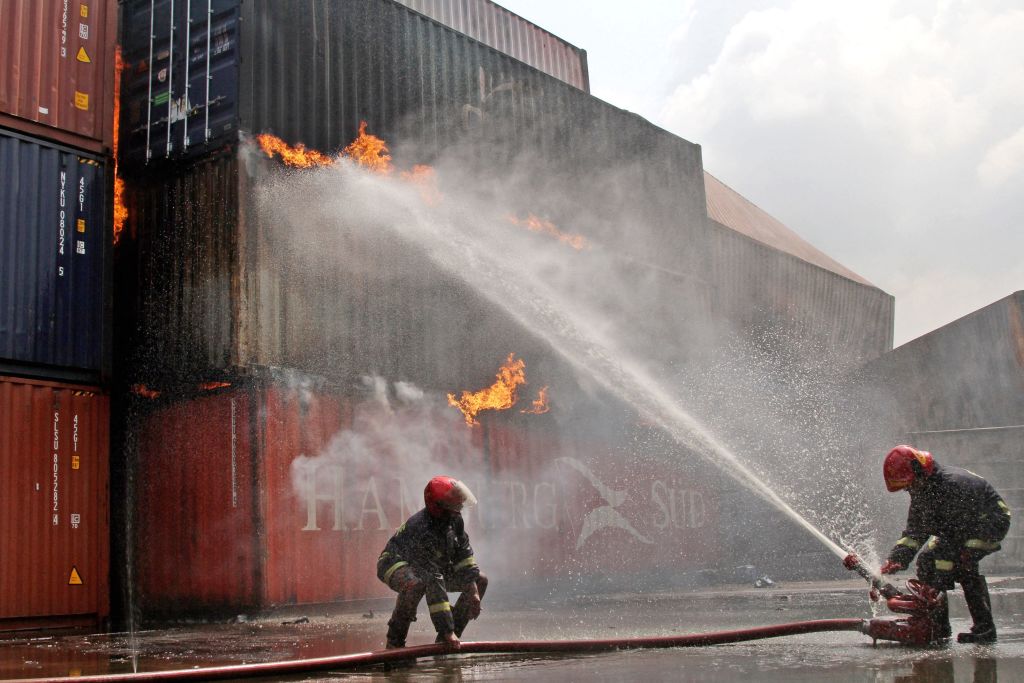 Firefighters try to extinguish an ongoing fire that broke out at a shipping container storage facility in Sitakunda, about 40 km (25 miles) from the key port of Chittagong on June 6, 2022. (Photo by AFP via Getty Images)
Follow Us

Firefighters in Bangladesh battled for a third day on Monday to stamp out a massive fire that killed 41 people at a container depot in an incident that spotlights the South Asian nation’s poor safety record.

Drone footage showed thick columns of smoke and rows of burnt-out containers as Saturday’s fire persisted after a huge blast and shipping container explosions at Sitakunda, 40 km (25 miles) from the southeastern port city of Chittagong.

The fire has been largely reined in but not entirely extinguished, as containers nearby loaded with chemicals pose a risk of life-threatening explosions, fire officials said.

“Our firefighters are working hard, but due to the presence of chemicals it’s too risky to work close by,” said Anisur Rahman, fire service chief of the port city.

Similar explosions, some of which shattered the windows of buildings in the neighbourhood, have already complicated the firefighters’ task.

Troops have also joined the effort to prevent the spread of chemicals in nearby canals and along the Bay of Bengal coastline, officials said.

Officials revised the death toll down to 41 from 49, with more than 200 injured. The tally included at least nine dead firefighters, while 10 policemen were among the 50 rescue officials injured, said city police official Alauddin Talukder.

More deaths are feared, however, as some of the injured are in critical condition, said Chittagong doctor Mohammed Elias Hossain.

The cause of the blaze was not immediately clear. But fire officials suspect it could have originated in a container of hydrogen peroxide before spreading quickly.

At the depot were about 800 containers filled with exportable items, about 500 with imported items and about 3,000 that were empty, Sikder added, quoting officials of the shipping facility, BM Container Depot.

“Some 85% of the total exportable goods were readymade garment,” he said.

The privately-owned shipping facility has promised compensation of 1 million taka ($11,000) to the family of each worker killed in the fire.

Bangladesh has become the world’s second-biggest exporter of garments in recent decades, but its infrastructure for, and focus on, industrial safety are still nascent, the International Labour Organization said this year.

Lax regulations and poor enforcement have been blamed for conflagrations in recent years that led to hundreds of deaths.

In 2020, three people were killed after an oil tank exploded at a container depot in Chittagong’s Patenga area, while 54 died last July in an inferno in a food processing factory outside the capital, Dhaka.

In 2019, 70 were killed in a fire that engulfed several buildings in a centuries-old neighbourhood of the capital.