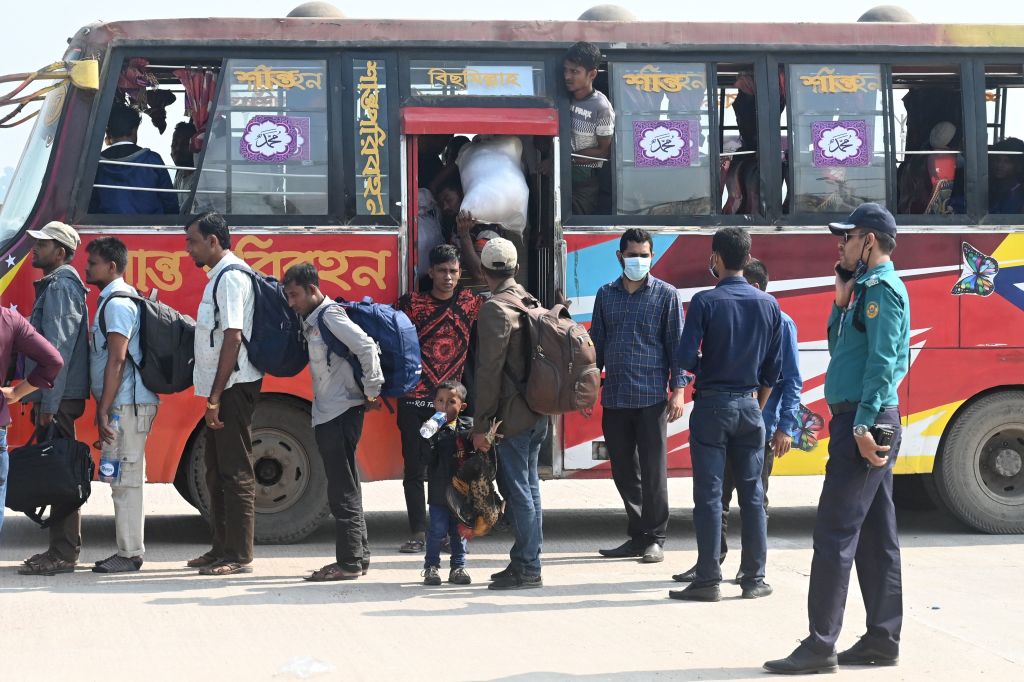 Rohingya refugees get off from a bus to be relocated to Bhashan Char island in the Bay of Bengal, at Chittagong Boat Club in Chittagong on November 25, 2021. (Photo by MUNIR UZ ZAMAN/AFP via Getty Images)

DOZENS of Rohingya refugees sent to a remote and flood-prone Bangladesh island have been allowed to visit their relatives for the first time since their relocations began two years ago.

Nearly 20,000 members of the stateless Muslim minority, who fled neighbouring Myanmar in 2017 after a brutal military crackdown, have already been sent to Bhashan Char island.

Bangladesh has been criticised by rights groups for the relocation plan, which aims to eventually move around 100,000 refugees to ease overcrowding in cramped refugee camps near the coastal city of Cox’s Bazar.

Authorities on Tuesday (30) allowed 68 Rohingya to leave the formerly barren island to visit their family members on the mainland.

“A Navy ship took them to Chittagong and from there they were taken to the camps by two buses,” a Navy spokesman said on Wednesday (1).

“This is the first time Rohingya living on the island have gone to the camps to visit their relatives.”

A senior disaster management ministry official, speaking on condition of anonymity, said the government had decided to allow at least two trips per month from the island to the camps.

The first group leaving Bhashan Char arrived at the camps Tuesday night for an emotional reunion with relatives after months of separation.

“When I found that I was on the list of people who were allowed to visit Cox’s Bazar, I broke into tears,” said Mohammad Hossain.

“My older brother lives here… I thought I would never see him again,” he added. “Coming here I feel like I am coming back to my community.”

About 850,000 Rohingya are packed into camps along the Bangladesh-Myanmar border. Most fled the Myanmar military clampdown in 2017 that the United Nations says could be genocide.

Bangladesh has been praised for taking in the refugees who poured across the border but has had little success finding them permanent homes.

Bhashan Char is 60 kilometres (37 miles) from the Bangladesh mainland and lies at the heart of the Meghna estuary, an area prone to powerful cyclones that have killed around one million people in the last 50 years.