Australia captain Aaron Finch said on Friday (10) a good performance by his team in India would help bring smiles back to the faces of people suffering in bushfires that have wreaked havoc at home.

The catastrophic blazes have killed at least 26 people and scorched huge areas of land. Finch said the disaster has overshadowed their tour.

“Obviously it’s very unfortunate what’s happening in Australia and our thoughts are with everyone that’s affected by the bushfires all around Australia,” Finch said ahead of Australia’s three one-day internationals starting in Mumbai on Tuesday.

“At the end of the day cricket is very insignificant to what is happening there and in terms of, like you said, the loss of life. Lot of wildlife has unfortunately perished as well.

“So I think all we can do as players is try and bring some good performances and bring some excitement and some smiles on faces of some people who are having it very tough at the moment.”

Finch’s side have enjoyed a good home summer after their semi-final loss to eventual winners England in the 50-over World Cup in July last year.

Australia whitewashed Sri Lanka in a three-match Twenty20 series in October-November, outplayed Pakistan in T20 and Test matches and then swept aside New Zealand in three Tests.

Finch said the team would take inspiration from their last India tour in 2019 when they won a five-match ODI series 3-2 after losing the first two matches.

“Most teams around the world now are very, very comfortable playing at home, so for us to be able to go away and continually win and challenge the best teams in the world on a regular basis is really important to us,” said Finch.

We are excited for the challenge. We obviously won here last time we came. So to be able to back that performance up and starting off well in Mumbai is really important to us.”

The second international is in Rajkot on January 17 and the series ends in Bangalore on January 19. 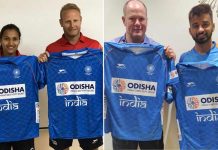