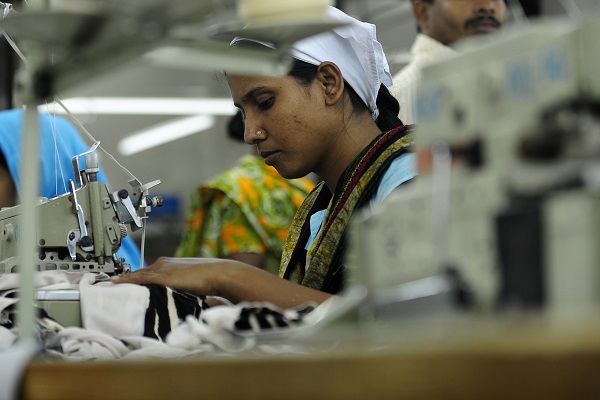 Lululemon has told the newspaper that it won’t tolerate such practices and will quickly launch an investigation into the matter (Photo: MUNIR UZ ZAMAN/AFP/GettyImages).
Follow Us

CANADIAN athletic apparel retailer Lululemon Athletica has started a probe into the sourcing of its clothing following a media report.

A report by The Guardian said young women staff members of the garment factory that supply the brand were beaten and physically harassed.

The Canadian firm used a factory in Bangladesh where women workers are subjected to physical violence, humiliation, and verbal abuse

Lululemon has told the newspaper that it won’t tolerate such practices and will quickly launch an investigation into the matter.

“There are currently no orders planned for this factory, and we will take appropriate action based upon the findings of our investigation,” a spokesperson said.

The Bangladeshi factory is owned by Youngone Corporation. It supplies its products to many athletic apparel companies, including Lululemon.

The factory staff members claim that they were forced to work overtime. Further, they were verbally and physically harassed or assaulted if they break any rule.

Also, workers are paid £85 as their monthly payment, which is £17 less than the cheapest pair of Lululemon leggings.

Meanwhile, Youngone Corporation in a communication to the publication said: “We are fully committed to providing a working environment in all our facilities that is safe, fair, and just”.

The Bangladeshi firm noted that it has started an internal review into the proceedings.

Recently, Lululemon launched a partnership with the United Nations Foundation to address the mental and physical health of UN development and humanitarian workers.

On its website, Lululemon states that it doesn’t own its production sites but takes great care in choosing its manufacturing partners.