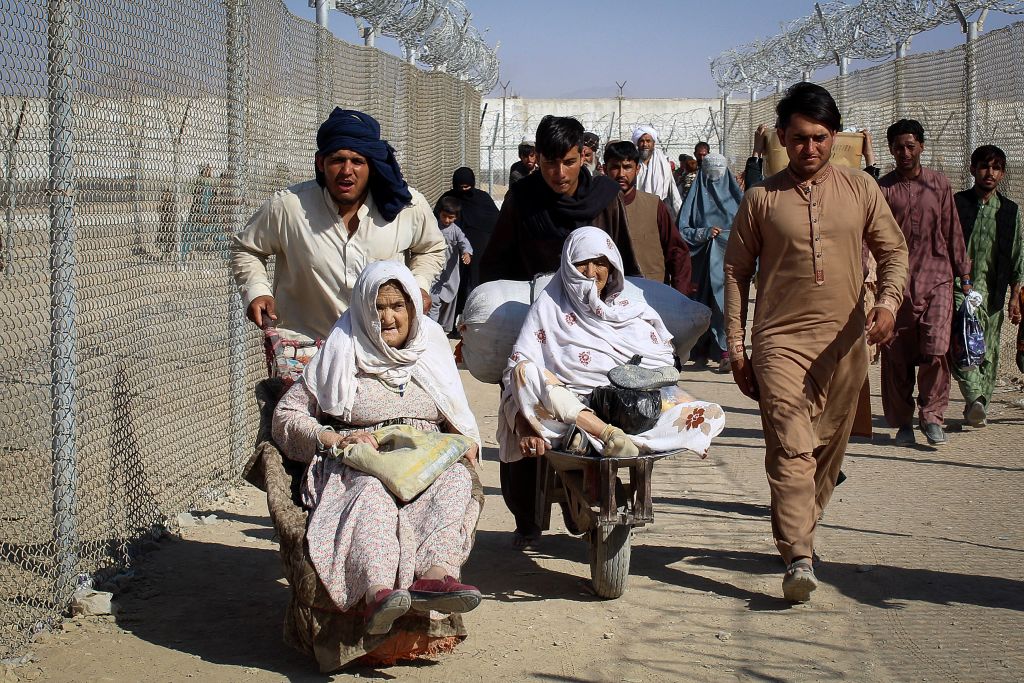 Afghans walk along fences as they arrive in Pakistan through the Pakistan-Afghanistan border crossing point in Chaman on August 23, 2021 following Taliban’s military takeover of Afghanistan. (Photo by AFP via Getty Images)

AS China and Pakistan mull a joint strategy to push for a global recognition of the Taliban regime in war-torn Afghanistan to further their interests, experts have warned the “all-weather allies” of long-term losses, especially a blowback effect from the US.

Since the Taliban’s takeover of Kabul on August 15, China and Pakistan have stepped up contacts amidst a sense of their delight over a “humiliating defeat” of the US after a 20-year war in Afghanistan despite lingering concerns over the return of the Taliban with all its baggage of the al-Qaeda and the Islamic State terror groups.

Contrary to its oft-stated diplomatic position that it has no favourites in Afghanistan, the Pakistani government is clearly comfortable with the return of the Taliban, the Hong Kong-based South China Morning Post quoted some Pakistani analysts as saying.

Within hours of Kabul’s fall, Pakistan Prime Minister Imran Khan said the Afghan people had “broken the shackles of slavery”.

Pakistan has lobbied the international community – close allies China and Russia in particular – to garner support for a collective diplomatic engagement with the Taliban as a means of ensuring that the group keeps its promises to form an inclusive administration, prevent terrorist attacks from Afghanistan and allow women access to education and employment, the Post report said.

“Pakistan has the most to gain from peace in its neighbour and the most to lose from strife and instability,” said Maleeha Lodhi, a former Pakistani ambassador to the UK, the UN and the US.

Pakistan only stands to gain in terms of stability on its western border if the Taliban were able to govern effectively, accommodate other ethnic groups and establish lasting peace, she said.

“Conversely, if they are unable to do so, Afghanistan could face an uncertain and unstable future which will not be in Pakistan’s interest,” she said

Abdul Basit, an associate research fellow at the S Rajaratnam School of International Studies (RSIS) in Singapore, said the relationship between Pakistan and the Taliban is “a marriage of convenience based on tactical divergences in Afghanistan”.

Beyond this marriage of convenience, the relationship between Pakistan and the Taliban had “its own ups and downs, disagreements and divergences”, Basit said.

For instance, Islamabad was frustrated by the Taliban’s lack of action against the thousands of Pakistani Taliban fighters in eastern Afghanistan, he said.

At a confidential parliamentary briefing of Pakistan’s politicians on July 2, Inter-Services Intelligence (ISI) chief Lieutenant General Faiz Hameed described the Taliban and the Tehreek-e-Taliban Pakistan (TTP) group as “sides of the same coin”.

Also, the analysts said both Pakistan and China will face a strong push back from the US, which may feel more liberated after withdrawing its troops as it could focus its attention more on China and the region.

The US-Pakistan ties would remain strained, with Washington asking for counterterrorism support and pressure on the Taliban, Stanford University analyst Asfandyar Mir said.

“If the Taliban behave responsibly and run their government moderately, US-Pakistan relations will stay afloat without showing any improvement,” Basit said, adding that if the situation in Afghanistan deteriorates, the US-Pakistan ties will nosedive.

Chinese analysts too had a similar warning for China.

America’s longest war has ended in a catastrophic failure and it has given Beijing a propaganda coup at the time of adversarial nature of bilateral ties with Washington, Wang Xiangwei, former editor-in-chief of the Post, wrote in his column in the newspaper.

“Understandably, Chinese official media reports and commentators have been relentless in mocking the American defeat in Afghanistan, a country known as “the Graveyard of Empires”.

“There is no doubt that the American debacle in Afghanistan has given China’s massive propaganda machine a field day, allowing it to pour scorn on American decline, but the claims of some overseas analysts that this has given China a strategic win are premature,” Wang said.

From a Chinese point of view, having US troops bogged down in Afghanistan has far greater geopolitical benefits, he said.

Now the American withdrawal will not only create uncertainties and risks in regional stability and the balance of power but will also allow Washington to focus more attention and resources on countering China, he said.

US President Joe Biden made that sentiment clear in his speech this week when he said, “our true strategic competitors, China and Russia would love nothing more than the United States to continue to funnel billions of dollars in resources and attention into stabilising Afghanistan indefinitely.”

Evidently, Beijing sees both risks and opportunities after the Taliban returns to power, Wang said.

On one hand, Beijing has legitimate worries that Afghanistan could again become a staging ground for terrorists because of the Taliban’s historical links with extremists including the East Turkestan Islamic Movement (ETIM), a group of Uygur militants blamed by China for terror attacks in Xinjiang, he said.

Taliban co-founder Mullah Abdul Ghani Baradar, during his visit to China last month, had assured Chinese foreign minister Wang Yi that the Taliban will not allow foreign fighters to operate from Afghanistan.

“But Beijing remains unconvinced and Wang used that meeting and others since then to stress that the Taliban must take concrete actions to make a clean break with all terrorist forces including the ETIM,” Wang Xiangwei said.

Shi Yinhong, an international affairs specialist from Renmin University, said there must be some strategic benefits for the US after withdrawing from a 20-year war as Washington has made it clear that it would concentrate strategic forces against China.

“I believe China is listening and watching,” he told the Post.

Lu Xiang, a US affairs specialist at the Chinese Academy of Social Sciences, said the Asia Pacific could be high on the agenda for the White House.

“The US always wants to create a kind of discomfort for China through the issues of the South China Sea issue and Taiwan because this could divide China’s political and diplomatic resources,” he added.