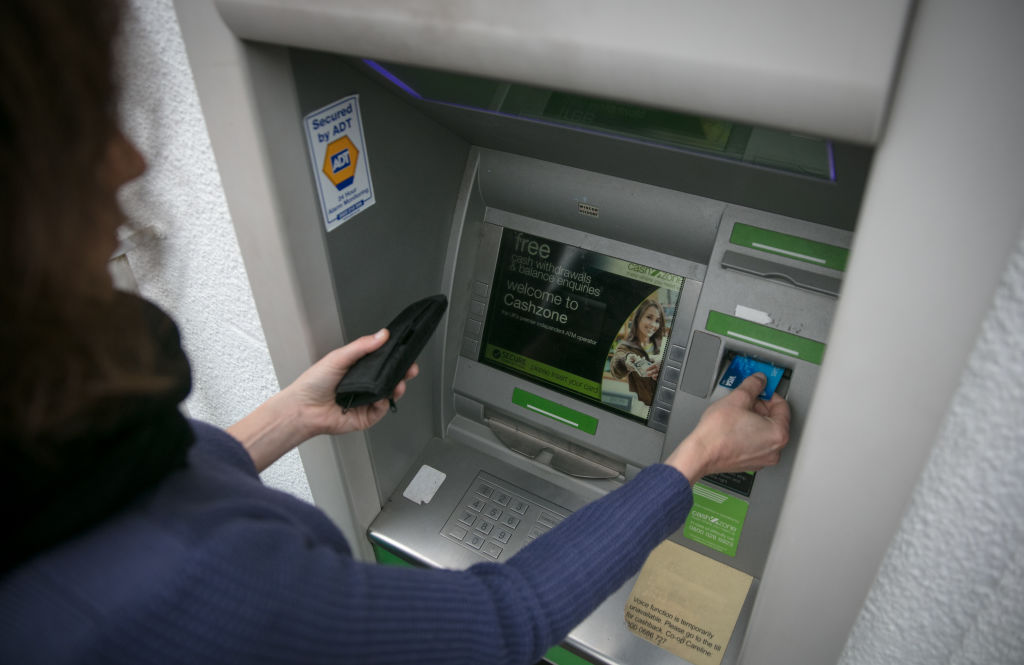 In this photo illustration a woman uses a cashpoint ATM in Bristol, England. (Photo by Matt Cardy/Getty Images)
Follow Us

Promises of tax cuts from candidates to succeed British Prime Minister Boris Johnson pose another inflationary risk which could pressure the Bank of England to raise interest rates more aggressively, cancelling out any potential boost to the economy.

Most of the 11 contenders, trying to portray themselves as defenders of the Conservatives’ traditional low-tax ethos, have promised to ease a tax burden which is set to hit its highest since the 1940s.

With little mention of any off-setting spending cuts, the pledges mark a further departure from the era of fiscal restraint – or austerity – that was the hallmark of Conservative Party policy for much of the decade before the coronavirus pandemic spurred a historic surge in spending, and debt.

Even big-spending Johnson, who last week announced he will step down after a scandal-strewn three years in power, has balked recently at the prospect of immediate tax cuts with inflation barrelling towards double-digits.

For some, the calls to cut taxes sit uneasily with the economic realities facing Britain. The International Monetary Fund and the Organisation for Economic Co-operation and Development have warned that the country runs a bigger risk of persistently high inflation than other similar economies.

“(It) feels like this leadership election is dodging the key issue facing the Conservative Party: you can’t have (Margaret) Thatcher levels of taxation and Johnson levels of public spending,” said Gavin Barwell, who was chief of staff to Johnson’s predecessor Theresa May.

The horse-trading over taxes represents a potential headache for BoE policymakers concerned about the persistence of inflation.

While tax cuts could inject some stimulus into an economy that looks set to flat line in 2023, a wider budget deficit might further weaken the pound and stoke inflation.

“If you’re looking at big tax cuts funded by borrowing in the short run then that might have some small effect, in the wrong direction, on inflation,” Paul Johnson, director of the Institute for Fiscal Studies think tank, told the BBC.

“It may result in the Bank of England increasing interest rates a little bit further and a little bit faster than they otherwise would have done.”

“The response to looser fiscal policy by the Bank of England may be to hike rates more aggressively, to counter the resulting upward pressure to inflation that this would bring about,” he said.

While there is little detail about the candidates’ promises, differences are emerging on the scale of the support being offered by Johnson’s successors.

Some have pledged sweeping tax cuts aimed at both businesses and households, on the grounds this would boost corporate investment and help hard-pressed households grappling with inflation.

While economists say cuts to taxes on consumers would offer short-term relief in the cost-of-living crisis, they are more likely to be inflationary in the long run with benefits skewed towards wealthier households.

Sajid Javid, who resigned as health secretary last week and previously held the finance and business ministerial briefs, has promised to lower the duty paid on motor fuels, income tax, and corporation tax. He has also pledged to reverse an increase in National Insurance (NI) – or social security – contributions.

Jeremy Hunt, one of Truss’s predecessors and a former health minister, said he would cut “all taxes” but would focus on cutting corporation tax first, saying it would be the least inflationary.

By contrast, Rishi Sunak – who was finance minister until his resignation last Tuesday – has stressed the need for fiscal restraint and dismissed the “comforting fairy tales” of rival contenders that would leave the next generation poorer.

Keir Starmer, leader of the opposition Labour Party, homed in on the lack of clarity.

“Every single Tory candidate making wild spending commitments should tell us precisely where they’re getting that money from. Is it cuts? If so, what are they cutting?” Starmer said on Monday.

Tax cut pledges during a Conservative leadership election are nothing new, but some economists warn the lack of debate about trade-offs – during a time of economic upheaval – has echoes of past policy mistakes.

In the early 1970s, Conservative prime minister Edward Heath’s “dash for growth” policy contributed to inflation spiralling out of control by the mid-1970s.