“Did shree chhatrapati shivaji had bulbs in his kingdom? In 1674? do some research man! (sic)” commented a user on Akshay’s Instagram post. 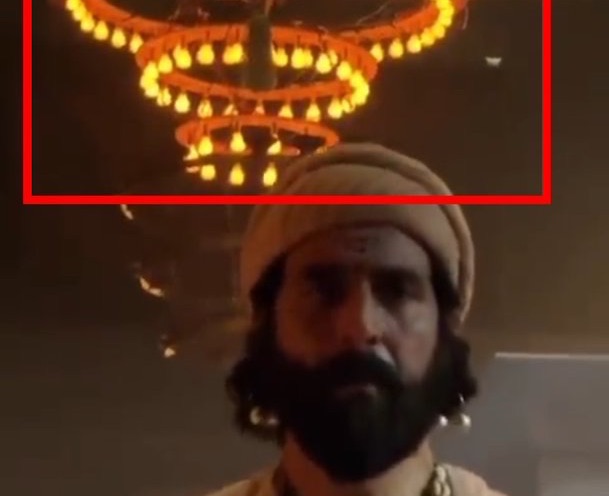 Some asked if there were electric bulbs in the 17th century, while others pleaded with him to not “ruin” another historical character. The Bollywood actor also found support from his ardent fans and colleague Ajay Devgn.

Akshay shared on Tuesday that he has commenced filming for his Marathi debut film “Vedat Marathe Veer Daudle Saat”, and hours later posted a clip of his first look as Shivaji Maharaj on Instagram.

Soon, social media users started analysing the look and the production design of the film. Some eagle-eyed netizens shared screenshots of the chandelier in the video which appeared to have been illuminated by bulbs.

“Did shree chhatrapati shivaji had bulbs in his kingdom? In 1674? do some research man! (sic)” commented a user on Akshay’s Instagram post.

Born in 1630, Shivaji is acknowledged for his valour, military genius and leadership. He died in 1680.

Highlighting that the light bulb was not invented until 1879, another wrote: “Uss time jhumar mein Bulb lagate the kya?” With over 16,000 tweets, Akshay’s name continued to trend on Twitter even on Wednesday afternoon.

In an apparent reference to the box office and critical debacle of Akshay’s “Samrat Prithviraj”, a big-budget period action film on legendary warrior king Prithviraj Chauhan, an Instagram user urged the actor to not “ruin this one”.

His colleague Ajay took to Twitter to express his excitement about the film. “Dear @akshaykumar, looking forward to seeing you essay the role of Chhatrapati Shivaji Maharaj in the Marathi film – ‘Vedat Marathe Veer Daudle Saat’. He is my favourite Maratha hero and I’m happy yet another film is being made saluting this great warrior,” wrote Ajay on Twitter.

Akshay, who hasn’t yet reacted to the criticism, replied to Ajay: “Thanks bhai.” “Some Haters Are Deliberately Spreading Negativity Against #AkshayKumar just bcz he always tries to uphold the glory of Hinduism through his movies,” wrote an Akshay fan on the microblogging site.

A fan page of the National Award winner shared a tweet: “Our love, respect and blessings always (sic) with you sir. Best of luck @akshaykumar paaji.” “All the best sir, please play this role with full dedication. A lot of people’s emotions are attached to this great personality,” said another fan on Twitter.

There were also those who pitched actor Sharad Kelkar’s name to play Shivaji. Kelkar had famously essayed the role of the Maratha chieftain in the 2020 film “Tanhaji: The Unsung Warrior”, fronted by Ajay.

“Which one you prefer? Like for Akshay Kumar. RT for Sharad Kelker. #AkshayKumar #sharadkelkar (sic)” posted a social media user.

“Only marathi actors can portray the character of shivaji maharaj. I don’t think any Bollywood actor will suit for this (sic),” another said.

“Vedat Marathe Veer Daudle Saat”, produced by Vaseem Qureshi, is set to be released in cinemas on Diwali 2023 in Marathi, Hindi, Tamil, and Telugu.