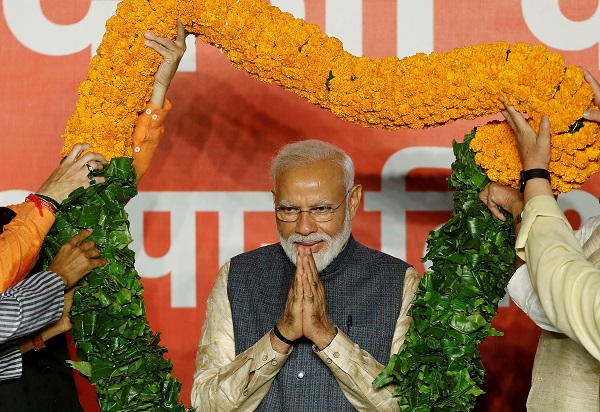 Prime minister Narendra Modi gestures as he is presented with a garland by Bharatiya Janata Party (BJP) leaders after the election results in New Delhi, India, May 23, 2019. (Photo: REUTERS/Adnan Abidi)
Follow Us

PRIME MINISTER Narendra Modi will be in Gujarat on Sunday () evening to seek the blessings of his mother after his BJP-led NDA returned to power with a massive majority in the Lok Sabha elections.

On Monday, he will be in Varanasi, the LS seat he retained in the elections by a margin of 479,000 votes.

“Will be going to Gujarat tomorrow evening, to seek blessings of my Mother. Day after tomorrow morning, I will be in Kashi to thank the people of this great land for reposing their faith in me,” the prime minister tweeted.

The victory margins of all but two candidates of the BJP increased significantly in the 2019 Lok Sabha polls when compared to the 2014 polls, as per data provided on the Election Commission website.

Like in 2014, the ruling BJP swept all 26 seats in Gujarat, the highest margin being that in Navsari where its candidate CR Patil won by 6.89 lakh votes against the Congress’ Dharmesh Patel.

As many as fifteen candidates won by a margin of over 3 lakh votes in the 2019 election compared to six in the 2014 general polls.

Only in Dahod and Porbandar parliamentary seats, the margin of victory of the BJP candidates went down when compared to 2014.

The victory margin of Vadodara candidate Ranjan Bhatt, at 5.89 lakh votes, is slightly higher than the margin of 5.70 lakh votes with which Prime Minister Narendra Modi had won the 2014 election from the seat.

BJP president Amit Shah won by a margin of 5.57 lakh votes from Gandhinagar seat against his nearest rival, the Congress’ C J Chavda.

Darshana Jardosh, the BJP candidate from Surat, won with a difference of 5.48 lakh votes, which is higher than the 5.33 lakh difference she managed in 2014.

Ratansinh Rathod won from Panchmahal seat by a margin of 4.28 lakh votes against the Congress’ V K Khant, which was much higher than the victory margin of 1.70 lakh votes with which BJP’s Prabhatsinh Chauhan won the seat in the 2014 election.

Hasmukh Patel won the Ahmedabad East seat by a margin of over 4.34 lakh votes against his Congress rival Gitaben Patel.

Bollywood actor Paresh Rawal had won the seat in 2014 by a margin of 3.26 lakh votes.

Dahod and Porbandar are the only two seats on which the ruling party’s victory margin went down compared to the 2014 election.

In Porbandar, Ramesh Dhaduk of the BJP defeated Congress’ Lalit Vasoya by a margin of 2.29 lakh votes, which was lower than the victory margin of 2.67 lakh votes the seat saw in 2014.

Voting was held on all twenty six seats in Gujarat in a single phase on April 23.

The state had recorded an all-time high voting percentage of 64.11 per cent, a rise by 4 per cent when compared to 2014.

As per party-wise vote share data, the BJP got 62.2 per cent of total votes polled, while the Congress got 32.1 per cent votes in the 2019 elections.

This is even higher than the 60 per cent votes the BJP got in the 2014 Lok Sabha election.