“Once you find the point you want to dig in and hold it there for 20 seconds.” 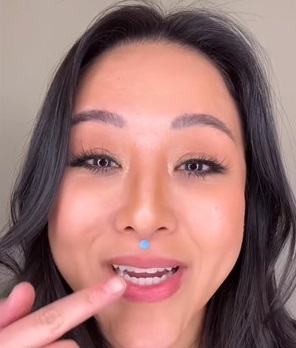 Practitioners of reflexology, which is a discipline in Chinese medicine believe that exerting a bit of pressure in a certain way to pressure points in the body, which are supposedly extra sensitive can help to ease pain, improve health, and restore balance in the body.

Now, an acupuncturist Eileen Li, from the US has revealed that just by pressing down on the spot between your nose and upper lip, you can “stimulate alertness” and feel more awake, The Sun reports.

The study of how one part of the body is connected to another is known as reflexology.

Meaning, you may have to massage a different location of your body such as your hand to treat a different area, such as your head. Therefore, you will be able to ease your pain when you reach the right pressure points, an earlier feature in Healthline informs.

Eileen reportedly said that the magic spot, which the expert calls DU26, can also help remove congestion from the sinuses, reduce back pain or help wake up someone else.

The medicine guru explains in her Instagram video that acupuncture point DU26 has traditionally been used to help people gain consciousness and to avert fainting in people.

“Save this tip because you never know when you’re going to need it,” she states.

If you have long nails, Eileen recommends hitting the spot by using a knuckle or by placing a pen on that area.

“Once you find the point you want to dig in and hold it there for 20 seconds,” she said.

She adds, “Your eyes might water and your sinuses might open up but you’ll definitely feel awake.”

Eileen’s video on how to stay awake and be more alert has about 1.2 million views with hundreds of people commenting about how her tip has helped them.

While one user wrote, “This was perfect timing, I had major back pain from wrapping presents today… I tried it and about halfway in I felt the pain went away – thank you,” another said, “It definitely opened my nasal cavities!”

Additionally, a previous report in WebMD informs that according to a study, it was found that when pressure is applied to acupressure stimulation points it can increase alertness in those who must sit in a classroom all day.

Researchers found that students who attended all-day lecture classes and who practiced a regimen of self-acupressure focused on stimulation points were less sleepy.

Speaking about the same, researcher Richard E. Harris, Ph.D., of the University of Michigan Health System’s Chronic Pain and Fatigue Research Center is quoted as saying, “Our finding suggests that acupressure can change alertness in people who are in classroom settings for a full day — which could be very good news for students who have trouble staying alert at school.”