A musical message of unity 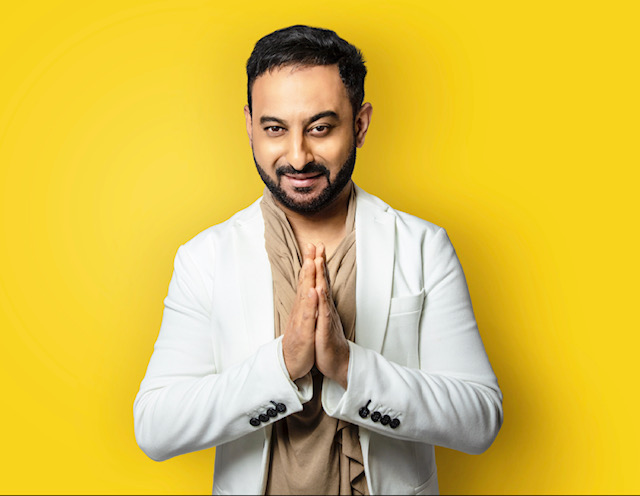 The ace British musician collaborated with world-class singers and delivered free online concerts in diverse genres to lift the spirits of those stuck indoors. Audiences connecting to meaningful songs being performed in his live shows and a strong desire to spread positivity led him towards creating marvellous new album Mind & Soul. The talented composer has created spiritual songs to help those who have suffered during the Covid-19 pandemic and to uplift others with its positivity.

There is also a strong message of unity on the 11-track multi-faith album, which features the stunning voices of Rekha, Shahid Abbas Khan, Anj Chauhan, Parry Mad, Abira Shah, Taren Kaur and Pritee Varsani, along with the flute of Robin Christian. He has composed, produced and performed on the album that combines new lyrics, written by Ajay Chandran and Anj Chauhan, with traditional scriptures and hymns, and contemporary east-west fusion music.

What first connected you to music?
My father was a musician in Kenya, playing harmonium and accordion. He continued to perform in the UK from the 1970s onwards. So, as a child, I was exposed to 50’s and 60’s Hindi film music via my father. As a teenager, I was then exposed to pop in a big way, which made me fall in love with a synthesiser.

Your new album explores Hinduism, Sufism, Sikhism and Christianity with diverse genres, including rock, gospel, western classical and urban. How did you select the songs for the album?
While I was composing the songs on Mind & Soul in mid-2020, I returned to unfinished work from the last 20 years and writing new melodies. I had written down what kind of songs I was looking for, almost like a script or scenarios for a film or a play, such as a gospel song, shiv bhajan, maha mantra chant, Sufi rock and so on. I wanted an array of different styles on this album and then composed on my created themes, such as Purity (the maha mantra song) and The Circle Of Life, (Gujarati philosophical song) and Higher Ground (gospel).

What was the biggest challenge of recording these tracks?
The biggest challenge was to get recording dates of singers and musicians to match with studio availability. I had programmed and produced 70/80 per cent of each song before entering the studio. Thankfully, it all worked out as my vocalists and studios showed great support and flexibility in getting this album to the finishing line, along with the artwork designer, video director and photographer.

Who are you hoping connects with these songs?
I am hoping everyone from all walks of life connects to this album. Be it in a spiritual way, or someone looking to be uplifted or someone who listens to religious songs and sings along chanting the almighty’s name. Some people may not understand the lyrical content or language but feel a universal connection to the music on songs like Monument and Higher Ground. There’s also a cute kids’ song called My Friend, which I am sure the children will sing along to.

What key messages do you want people to take away from this album?
The message for this album has always been about unity, being united and respecting everyone’s diverse backgrounds, from different ethnicities, race, origins and beliefs. I want people to realise that all of us being together, helping each other through troubled times is the answer to the path of happiness. The closing track Satya Prem Karuna epitomises what the album is all about.

How does this compare to other projects you have done?
In comparison to my other projects, this has been the most personal and fulfilling. Mind & Soul contains completely new original material. My other significant project which is very close to this album was the 2014 album Amor by Kumar Sanu, which I had co-composed and produced with Sahib G. Both are similar in terms of being personal, but on this album, it’s been easier to play with ideas and themes.

What has the experience of doing so many lockdown shows been like?
Performing online to a blank screen with no faces to see has been exciting but nerve-racking. During this pandemic, we artists have been lucky that we could carry on performing and keep our skill set alive, serve and help people with live music through these troubling times. The initial idea to perform live on Facebook and YouTube, among others, stemmed from not being able to see my parents for many months. All I could do is perform online for them and so many others. The most fulfilling part of this has been gaining new friends and doing my bit to help in any way I could.

What can we expect next from you?
I’ll be starting work on maybe a follow up album to Mind & Soul for next year and have already composed new spiritual songs. I had composed 20 to 30 songs for this project and chose the 11 that fitted the best. I’m also planning a few live events with my band Kaykay & Co. Bollywood Jackson may return early next year. Khiraj-E-Tehseen – the Nusrat Fateh Ali Khan tribute we did online could see the stage also next year. I am also composing for the projects of other artists.

Who would you love to collaborate with in future?
I have been blessed and lucky to collaborate with some of the very best singers in recent years, such as Rekha, Shahid Abbas Khan, Anj Chauhan, Parry Mad, Abira Shah, Shin DCS and Kumar Sanu. I also go to work with Taren Kaur and Pritee Varsani on this album. I think that collaborating with like-minded vocalists, musicians and lyricists is the key to success. When you have great artists to collaborate with already, it does become difficult to tune in on future collaborators. So, it’s very hard to pick whom I would like to collaborate with next.

What inspires you musically?
People close to me inspire me to work harder. Their belief in my work and compositions inspires me to be more creative. My wife Anj Chauhan’s belief in my work inspires me a great deal, along with my musical heroes and my saints in music I still listen to every other day, such as composers Shankar-Jaikishan, The Beatles, Pet Shop Boys, Depeche Mode, Mohammed Rafi, Asha Bhosle, Kishore Kumar, George Michael and so on.