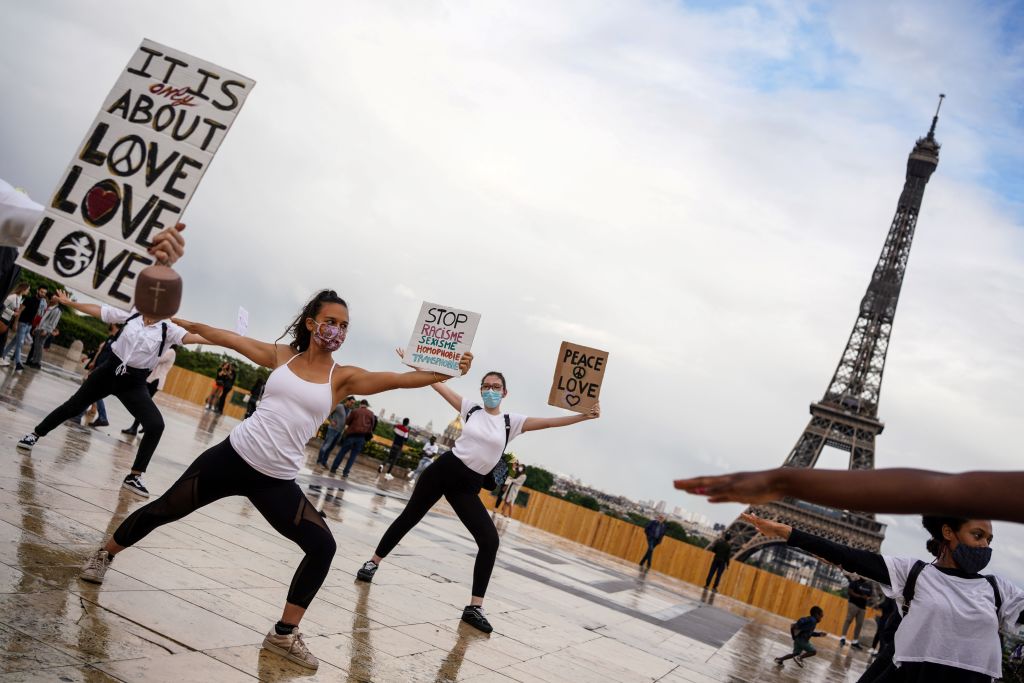 Members of Hermine Prunier’s yoga group hold up placards as they perform a choreography to an Indian song for world peace and protest to show their support for the Black Lives Matter movement on the Parvis des droits de l’homme, place du Trocadero, in Paris on June 21, 2020, during the French Festival of Music. (Photo: ABDULMONAM EASSA/AFP via Getty Images)

MILLIONS of people across the globe marked the International Yoga Day (IYD) on Sunday (21) as they joined virtual gatherings and shared online their pictures and videos highlighting the importance of the ancient practice for the world as it battles the coronavirus pandemic.

Prime Minister Narendra Modi led the celebrations in India and stressed that yoga has emerged as a force for unity which goes beyond race, colour, gender, faith and nations.

“It is a day of oneness and humanness,” he said. “What brings us together, unites us, that is yoga. What bridges distances is yoga.”

Today’s world needed yoga more than ever due to the pandemic, and it was helping a large number of Covid-19 patients across the globe in defeating the disease, Modi said in a 15-minute address.

Greetings on #YogaDay! Sharing my remarks on this special occasion. https://t.co/8eIrBklnLI

Yoga enthusiasts performed exercises in their homes or in small groups in the outdoors keeping in mind the social distancing norms as no major camps were organised due to the Covid-19 pandemic for the first time since June 21, 2015, when Yoga Day began to be celebrated annually across the world coinciding with the Summer Solstice or the longest day of the year.

British High Commissioner to India Philip Barton said it was “great to be doing my Yoga here in India, the home of Yoga”.

“I took up Yoga about three years ago,” he tweeted. “It has helped my body physically, helped me mentally and enabled me to relax.”

It is great to be doing my Yoga here in India, the home of Yoga on #InternationalYogaDay

I took up Yoga about three years ago. It has helped my body physically, helped me mentally and enabled me to relax.

It is a great initiative by @PMOIndia to promote #MyLifeMyYoga pic.twitter.com/1m8qI8PMFY

This year’s theme was ”Yoga at Home and Yoga with Family” due to the coronavirus concerns.

A number of people, including prominent personalities from various fields, posted their pictures and videos in various yoga poses on social media platforms with messages stressing on the benefits of yoga in fighting coronavirus and stress related to modern lifestyle.

Perhaps the most awe-inspiring images came from the icy heights of the Himalayas as the Indo-Tibetan Border Police personnel practised yoga in sub-zero temperatures in various places, including Ladakh, Arunachal Pradesh and Sikkim.

Indian President Ram Nath Kovind and Vice President Venkaiah Naidu said that practising yoga can help keep the body fit and mind serene amid stress and strife, especially in the wake of the Covid-19 pandemic.

Indian missions across the world too held virtual events to mark the occasion, unlike during the previous editions when mass gatherings had been held.

Dressed in casuals and some of them wearing face masks, people stretched themselves in various postures at yoga events held in the US, China, the UK, Turkey, Pakistan, Afghanistan, Nepal and several other countries to celebrate the occasion.

A digital projection and a series of webinars and live online yoga sessions marked the 6th International Day of Yoga (IDY) in the UK on Sunday.

The Indian High Commission in London organised a digital projection reflecting the ancient Indian practice and its many benefits at the Westfield Stratford City shopping centre in east London throughout the course of Sunday.

It was preceded by an online webinar titled “Ghar Ghar Se Yoga” coordinated by the Nehru Centre in London, in light of the social distancing norms in place that prevent a congregational aspect of the yoga sessions.

“Given the context of the current Covid-19 pandemic including restrictions on the movement of people and a slowdown in economic activity, the benefits offered by Yoga have become especially important for physical and mental wellbeing. Of particular importance are its proven benefits on general health and immunity enhancement, along with its globally accepted role as a stress buster.”

In Washington, Indian Ambassador Taranjit Singh Sandhu joined the embassy officials and other personalities including several Hollywood stars to celebrate the Yoga Day at a virtual event.

“We are not able to celebrate with a larger number of yoga enthusiasts due to the prevailing situation. Thanks to the technology, we are connected with thousands of people online from across the US,” Sandhu said.

The events were low-key in Beijing owing to the coronavirus pandemic and the Sino-India military standoff at the Line of Actual Control.

China, where yoga has been very popular, usually celebrates the occasion with numerous events ever since its inception by the UN.

This year, the main event was held at the India House with the participation of Indian and foreign diplomats along with their families.

On December 11, 2014, the United Nations General Assembly declared June 21 as ”International Day of Yoga”, months after Modi had proposed the idea.

Yoga can be a powerful tool to help people deal with the stress & isolation faced by many amid #COVID19. It’s also an effective way to maintain physical well-being.

Governors, chief ministers and other leaders as well as various institutions marked the day with special messages and virtual events across India.

The Ministry of Ayurveda, Yoga & Naturopathy, Unani, Siddha and Homoeopathy (AYUSH) had planned to hold a grand event in Leh, but cancelled it due to the pandemic.