Many people believe in this Indian tradition of storing water in a copper vessel or drinking water from a copper cup. 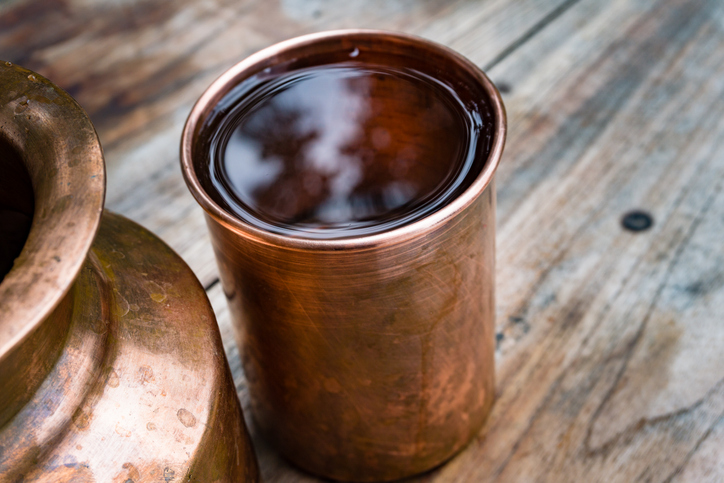 In today’s modern world, the storage of water in metal containers for health benefits may sound old-fashioned and irrelevant. However, this ancient practice which is mentioned in the texts of Ayurveda, the age-old Indian system of holistic medicine, is now supported by several scientific studies.

In fact, many people believe in this Indian tradition of storing water in a copper vessel or drinking water from a copper cup, first thing in the morning.

So, if improving your immunity this winter season is what you would like to do, Ayurveda recommends storing your drinking water in a copper vessel as it can reportedly offer a multitude of health benefits.

According to Ayurveda, drinking water from a copper vessel can help balance the three doshas or fundamental categories in the human body (Kapha, Pitta, Vata). It can also prevent various infections.

An earlier report in Healthline informs that copper is a trace element, and therefore, the body needs minimal amounts of it.

However, this mineral reportedly plays a key role in multiple essential bodily functions, including energy production and the chemical messaging system of the brain.

Supporters of this practice of drinking water from copper vessels state that when water is stored in copper containers, the metal is allowed to infuse into the water, thus conferring health benefits to those drinking it.

Besides improving brain health, copper also reportedly helps to improve heart health and has an antibacterial effect as well.

Water kept in copper vessels for over 48 hours can also reportedly kill harmful bacteria that may be present in the water.

According to a recent report in Indian Express, dietician Jinal Patel explains that “Copper helps improve digestion and prevents constipation and acidity. Copper also has anti-inflammatory properties; thus, it boosts immunity. Water stored in a copper vessel is alkaline and therefore drinking it cools down the body too.”

Additionally, taking to her Instagram account Dr Dixa Bhavsar earlier shared details about the benefits of drinking water stored in a copper vessel.

She is quoted as saying that the qualities of water stored in a copper vessel as per Ayurveda are Ushna which means, hot in nature, Rasa (Taste) – sweet and slightly pungent, Katu vipaka – undergoes pungent taste conversion after digestion.

Besides the change in taste, the doctor also shares some other health benefits of drinking water from a copper vessel. These are as follows:

• Helps to manage hypertension and cholesterol

• Beneficial in case of arthritis and inflamed joints

• Regulates the functioning of the thyroid gland

However, according to the expert, there is a suitable time to drink copper-activated water and the best time is early morning on an empty stomach.

Apparently, this is the best way to avail of all the health benefits of this water.

But an important thing to remember is that since copper is a trace mineral, it is only required in little amounts by the body. So, one needs to be mindful of consumption as this may lead to copper toxicity.

According to the WHO, an individual should not drink more than 0.47 mg of copper per cup (2 mg per litre) of water.

Healthline states, “Long-term exposure to high doses of copper may cause copper toxicity, which is characterized by nausea, vomiting, abdominal pain, and diarrhea. It may even lead to liver damage and kidney disease.”

Therefore, experts warn against surpassing the limit, and not relying too much on just one thing to provide health benefits.