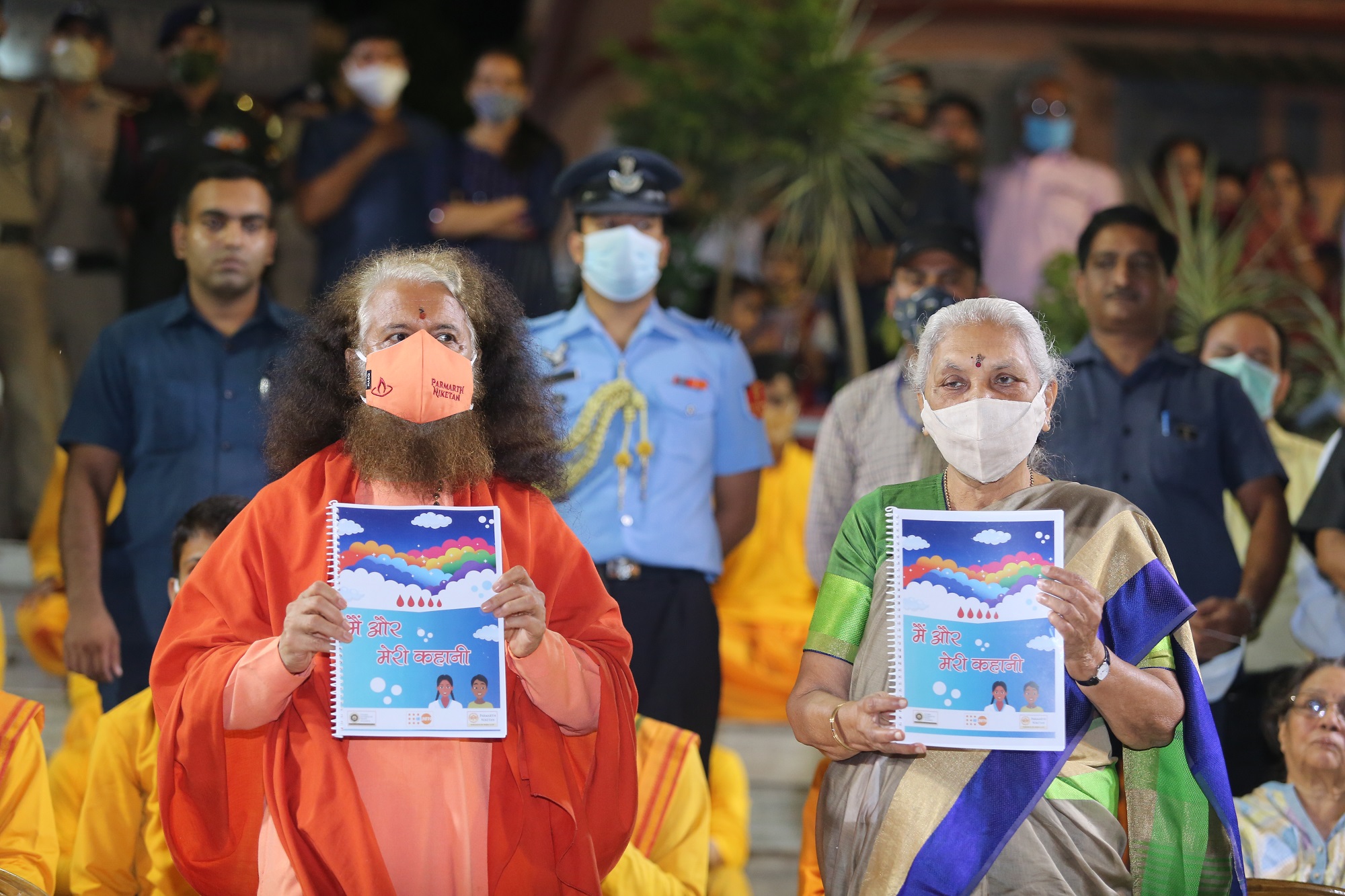 ANANDIBEN Patel, the governor of the northern Indian state of Uttar Pradesh, on Sunday (17) concluded her three-day visit to Parmarth Niketan Ashram in Rishikesh in the neighbouring state of Uttarakhand. The visit coincided with Navratri, the nine-day Hindu festival that celebrates the divine feminine energy.

Patel observed Navami and Vijaya Dashami celebrations at the ashram with the sacred morning fire ceremony (yajna) and the Ganga aarti (worshipping the sacred river Ganga). Besides Patel, who was cordially welcomed at the ashram by His Holiness (HH) Pujya Swami Chidanand Saraswatiji (Pujya Swamiji), the occasion also saw participation of Kottayan Katankot Venugopal, India’s attorney general. He cherished the spiritual experience he gained at the ashram and looked forward to visiting again.

During her three-day visit at the ashram, Patel met HH Pujya Swamiji extensively and discussed with him a number of key initiatives ranging from women and youth empowerment, water conservation, improved WASH (Water, Sanitisation and Hygiene), green technologies, environmental preservation and others.

The governor’s visit and stay at the ashram showcased various projects and initiatives that were flourishing under the leadership and inspiration of HH Pujya Swamiji such as presentation of LifeSkills Education publications on menstrual health; sexual reproductive health, faith perspective on equality and justice & government schemes for youth & women by the Global Interfaith WASH Alliance (GIWA) in partnership with United Nations Population Fund (UNFPA).

Special publications have been prepared by the Global Interfaith Wash Alliance founded by HH Pujya Swamiji as the world’s first interfaith initiative to bring together the world’s various faiths and traditions to work together towards an expanded definition of peace – one that includes improved WASH, gender equality, women and youth empowerment and environmental preservation.

The publications were launched under GIWA’s LifeSkills Education partnership with UNFPA. The brochures presented were on menstrual health, sexual reproductive health, fair perspective of equity and justice and on government schemes for youth and women. Youth from nearby slums were brought on the occasion to have a special interaction with Patel and HH Pujya Swamiji.

Patel, a former chief minister of the western state of Gujarat, visited the world’s first toilet college in the ashram premises, made in partnership with Harpic-Banega Swasth India, Reckitt and Jagran Pehel. She was told about the vision behind the college, which includes capacity development of sanitation workers towards improving their skills, health and hygiene during the course of their work. The aim is to ensure that no one is left behind and the empowerment of the region’s sanitation professionals.

The governor was impressed by the initiative and advised that the district magistrates serving in the areas could be brought together along with the sanitation workers so that they could be apprised of the needs of the frontline workers and more resources could be allocated for their health and safety.

Patel’s visit to the ashram also saw a special webinar by GIWA in partnership with UNICEF (United Nations Children’s Fund) to raise awareness around handwashing. The theme of the webinar was ‘Our Future is at Hand — Let’s Move Forward Together’ wherein hand hygiene is a fundamental component of health and public safety. The webinar was inaugurated by Patel, HH Pujya Swamiji, Nilesh Kumar, Chargé d’Affaires for Fiji High Commission to India and the country’s minister of state for Jal Shakti (water energy) Prahlad Singh Patel. Besides, eminent leaders Hindu, Muslim, Christian, Sikh and Jain traditions were also present.

A presentation made by 100 schools where GIWA has worked towards implementing the WaterSchools programme was shared with the governor of Uttar Pradesh. She appreciated the fact that toilet and handwashing toilets were completed in 40 of those schools and many more were underway.

The high-profile visitor then visited an exhibition displayed by Divine Shakti Foundation’s Parmarth Nari Sashakti Kendra in collaboration with Serene, a start-up company from Ahmedabad, Gujarat. Patel showed interest in knowing more about the work which is happening at the centre of excellence & training of women and a 10-day advance stitching training workshop which was recently completed. She was glad to see various garments made at the centre and said government funding was available for these projects and could be utilised. The women at the centre presented Patel with a hand-made bag exclusively for her.

Patel also previewed the work of the Girl Power Project of the Divine Shakti Foundation which will be launched soon in Rishikesh for empowering young girls to be the change they want to see in their societies. The initiative is in partnership with Just Like My Child.

The governor discussed with HH Pujya Swamiji various pilot projects that the latter has inspired across India and his innovative efforts to bring together green technologies to protect, preserve and conserve the National River Ganga. She also said that she would like to see decentralised waster water management, solid waste management and agriboard technologies implemented in Uttar Pradesh as well.

Later in the concluding day, Patel enjoyed the Ganga aarti and shared her experience from her days of serving the nation. HH Pujya Swamiji also shared many unique facts about Patel’s leadership and honoured her with a sacred rudraksh sapling, which will be planted in the premises of the governor’s house in Lucknow, the capital of Uttar Pradesh, in remembrance of her visit to the ashram.

Patel also interacted with principles, teachers and students of schools and shared with them inspiring stories from her life. She also encouraged the women and youth to be the change they want to see in the world.

As the governor departed after offering new dhotis and kurtas to the ashram’s young rishikumars, HH Pujya Swamiji invited her to celebrate her 81st birthday, which falls on November 21, in Rishikesh. Patel also planted a rudraskh sapling in the Rudraksh Vatika in Parmarth Yoga Garden before concluding her memorable trip to the ashram.