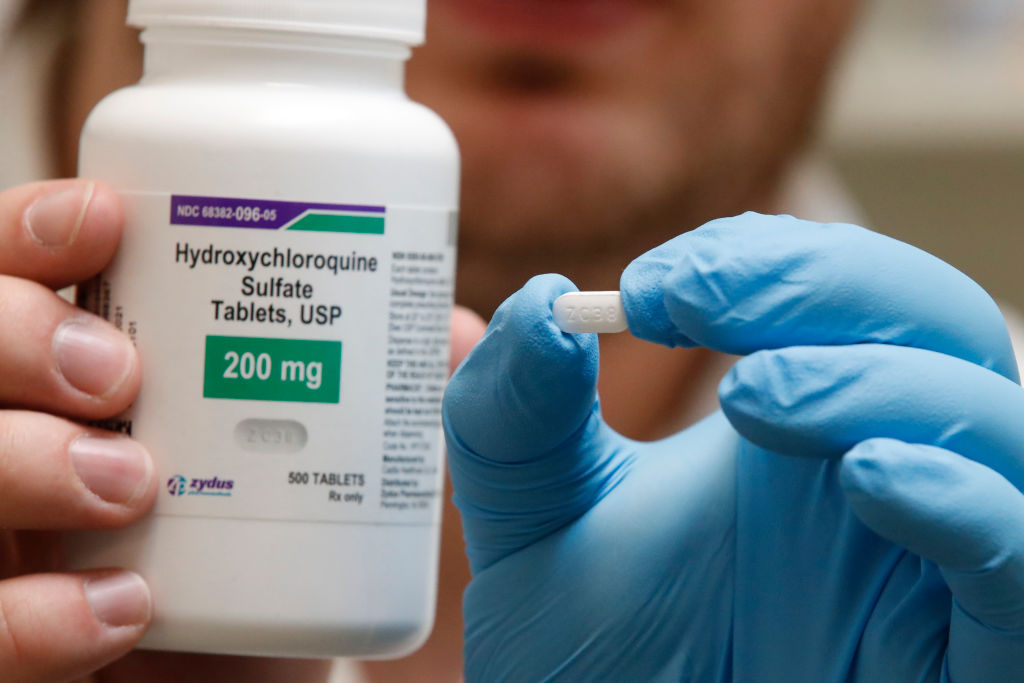 File photo of a pharmacy tech holds a bottle and a pill of hydroxychloroquine. (GEORGE FREY/AFP via Getty Images)

BRITISH healthcare workers have on Thursday (21) started taking part in a University of Oxford-led international trial of two anti-malarial drugs against Covid-19, including one US President Donald Trump says he has been taking.

The ‘COPCOV’ study will involve more than 40,000 frontline healthcare workers from Europe, Africa, Asia and South America to determine if chloroquine and hydroxychloroquine are effective in preventing the novel coronavirus.

The drugs have risen to prominence since Trump said earlier this week he was taking hydroxychloroquine as a preventive medicine against the virus despite medical warnings about its use.

The trial, led by the University of Oxford with the support of the Mahidol Oxford Tropical Medicine Research Unit (MORU) in Bangkok, will open to British participants at hospital sites in Brighton and Oxford on Thursday and involve those who are in close contact with patients with proven or suspected Covid-19.

“We really do not know if chloroquine or hydroxychloroquine are beneficial or harmful against Covid-19,” said the University of Oxford’s Professor Nicholas White, the study’s co-principal investigator who is based at MORU.

“The best way to find out if they are effective in preventing Covid-19 is in a randomised clinical trial.”

“We are looking at this with great care and examining all of the evidence that is out there,” Security Minister James Brokenshire told Sky News.

Earlier this week, Donald Trump said he had been taking the much-talked-about anti-malarial drug to ward off the conronavirus.

“I’m taking hydroxychloroquine,” said the US president. “I’ve been taking it for the last week and a half. A pill every day.”

“I take it because I think I hear very good things.

To queries on warnings about its possible side effects, Trump replied: “People are going to have to make up their own mind. I think it gives you an additional level of safety.

“I think it’s worth it as a line of defence and I’ll stay on it for a little while longer.

“It’s gotten a bad reputation only because I’m promoting it.”

The far-right leader made the remark on Tuesday, a day before his government recommended widespread use of chloroquine and a less-toxic derivative, hydroxychloroquine, to treat Covid-19 even in mild cases, despite questions about their safety and effectiveness.

“There is still no scientific proof, but (chloroquine) is being monitored and used in Brazil and around the world,” Bolsonaro tweeted on Wednesday.

“We are at war. Worse than defeat is the shame of never having fought at all.”

The Brazilian health ministry acknowledged that “there are still no meta-analyses of randomized, controlled, blind, large-scale clinical trials of these medications in the treatment of Covid-19”.

However, it said the government had a responsibility to issue guidelines using the information currently available.

“Brazilians are asking to receive this medication, which has shown positive results in various clinical studies. And we need to give them that right, even if the number of studies is still scarce,” health ministry official Mayra Pinheiro told a news conference.