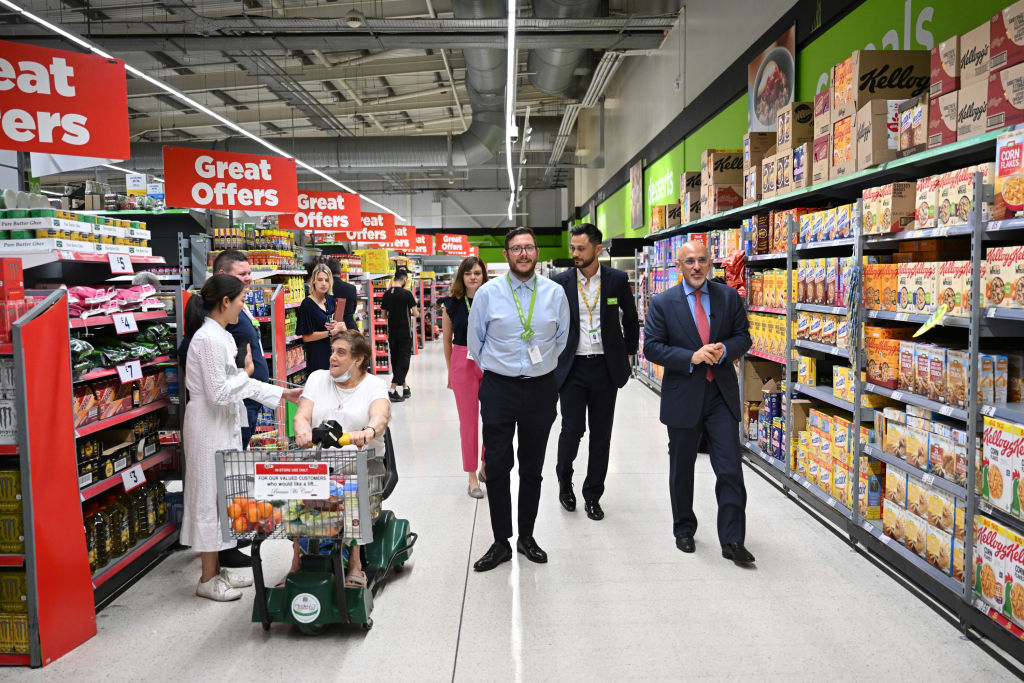 UK Chancellor of the Exchequer, Nadhim Zahawi (R) reacts as he visits an ASDA supermarket to mark the first Cost of Living Payments being issued, on July 14, 2022 in London, England. (Photo Justin Tallis – WPA Pool/Getty Images)
Follow Us

The Consumer Prices Index (CPI) jumped to 9.4 percent last month from 9.1 per cent in May, the Office for National Statistics said in a statement.

Analysts said the data put pressure on the Bank of England to raise interest rates by as much as 50 basis points, or half a percentage point, at its next policy meeting in August.

“In the UK, we saw another eye-popping CPI reading and the pressure is on the BoE to do what it takes before it is too late to control inflation,” said Naeem Aslam, chief market analyst at Avatrade.

Inflation has soared to the highest level in decades in many countries, fuelled by the war in Ukraine and the easing of Covid restrictions.

That has forced central banks to raise interest rates, risking the prospect of recession as higher borrowing costs hurt businesses and consumers.

The Bank of England has raised its key interest rate five times since December, lifting it to 1.25 percent from a record-low 0.1 percent.

The BoE has not increased its rates by more than 0.25 percentage points each time.

However, on Tuesday, BoE governor Andrew Bailey had said that “a 50-basis-point increase will be among the choices on the table when we next meet”.

Separate data this week showed that soaring UK inflation has caused the value of British wages to fall at a record pace.

And Britain is experiencing a summer of strike action as a result of the cost-of-living crisis.

Railway staff are preparing for further stoppages having last month carried out their biggest strike action in decades.

State-employed lawyers are also striking, while teachers and workers for the National Health Service are mulling action.

Britain’s retail prices index (RPI) — which includes mortgage interest payments and is used by unions and employers when negotiating wage increases — rose to 11.8 percent in June from 11.7 percent in May, the statistics office calculated.

“More pain is on the way for household budgets as the high rate of inflation continues to outpace wage growth, bringing down the real value of incomes across the UK,” said Yael Selfin, chief economist at KPMG UK.

“We also expect the Bank of England to continue raising the base interest rate, which we now expect to reach 2.0 percent early next year, to stave off further rounds of inflation rises.”