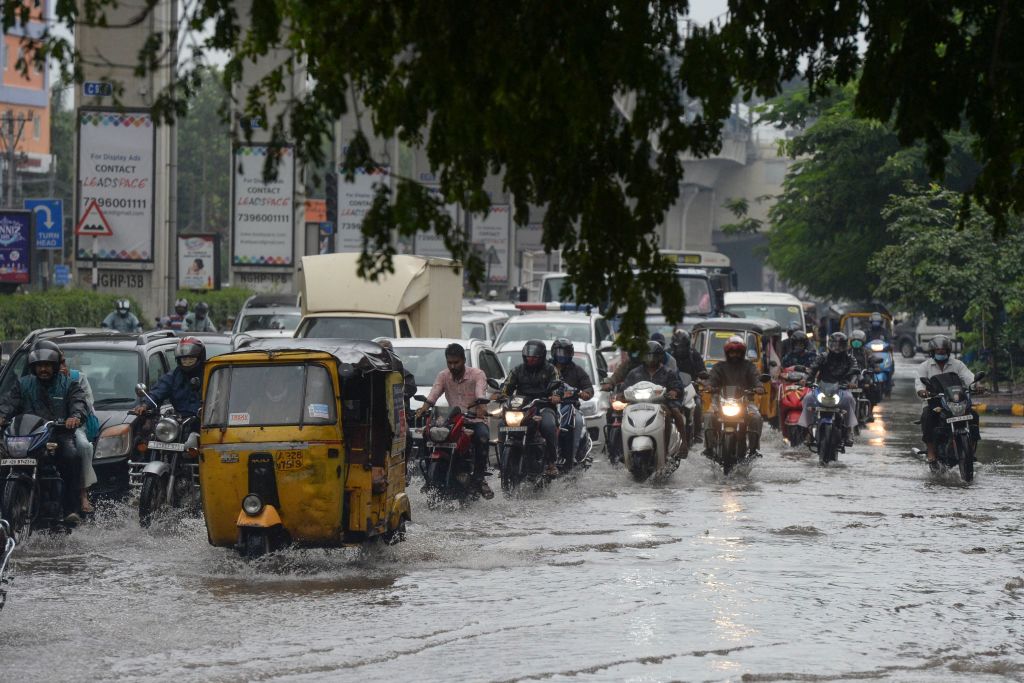 Motorists make their way through a water-logged street amid heavy rains in Hyderabad on September 27, 2021, the morning after cyclone Gulab made landfall between the coastal Indian states of Odisha and Andhra Pradesh. (Photo by NOAH SEELAM/AFP via Getty Images)

TWO fishermen were reported dead after a cyclone packing strong winds and rains barrelled into India’s east coast late Sunday (26), forcing the evacuation of more than 200,000 people in three states to shelters.

Cyclones are a regular menace in the northern Indian Ocean but many scientists say they are becoming more frequent and severe as climate change warms sea temperatures.

Cyclone Gulab made landfall between the coastal states of Odisha and Andhra Pradesh just after 6:00 pm local time (1230 GMT), bearing gusts of up to 95 kilometres (59 miles) per hour, the state-run India meteorological department said.

A rescue operation was launched after a fishing boat travelling from Odisha to Andhra Pradesh capsized during the storm, local media reported.

Three fishermen swam to shore, two others died and a sixth person from the vessel were still missing, the Indian Express added.

There were also early reports of trees being uprooted as the cyclone hit a coastal district in Andhra Pradesh.

The weather bureau added that Gulab was forecast to gradually weaken in the next few hours.

Odisha, Andhra Pradesh and West Bengal had ordered tens of thousands of people to move to shelters, after forecasts that the storm from the Bay of Bengal would bring “strong winds and very heavy (and) extremely heavy rainfall”.

In Andhra Pradesh, some 110,000 families were moved from low-lying areas to temporary relief shelters.

Evacuations were carried out amid concerns that at least one coastal district would be badly hit, Jena added in a statement.

In West Bengal north of Odisha, authorities, fearful that Gulab could wreak havoc despite being unlikely to hit the state directly, said they still carried out evacuations.

“We have so far evacuated more than 20,000 people to schools (and) government offices, which have been turned to cyclone shelters,” said Bankim Hazra, a state minister responsible for the low-lying areas.

In May, more than a million people were evacuated from their homes along India’s east coast before the area was battered by Cyclone Yaas, with winds gusting up to 155 kilometres (96 miles) an hour — equivalent to a category two hurricane.

At least 20 people were killed and tens of thousands were displaced in that storm, which caused widespread damage worth more than $2 billion in Odisha and West Bengal states and in neighbouring Bangladesh.