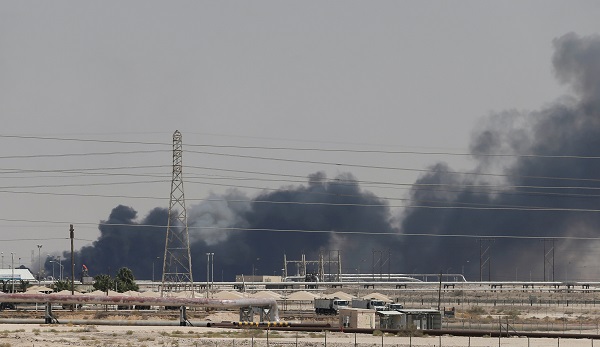 Smoke is seen following a fire at Aramco facility in the eastern city of Abqaiq, Saudi Arabia, September 14, 2019 (REUTERS/Stringer).

TWO oil refiners in India will collect their full allocated volumes of the commodity from Saudi Arabia despite attacks on the Aramco facilities.

Indian state refiners will get full volumes from Saudi Arabia for the next month, Reuters has reported quoting sources.

Three other Asian refiners will also get their volumes as scheduled.

Saudi Aramco reportedly told two other refiners in North Asia that they will receive the load in September and October as scheduled.

A source quoted by Reuters added: “Saudi has confirmed (to us) that our refinery will fully get its requested loading in September and October. We have not been asked to switch or delay.”

The attacks knocked out over 50 per cent of oil production from the top global oil exporter, a reduction of output by 5.7 million barrels per day.

Yemen’s Houthi rebels, who have been locked in a war with a Saudi-UAE-led coalition for the past four years, claimed responsibility for the attacks.

Saudi Arabia is the world’s largest oil exporter. The attack on state-owned producer’s oil processing facilities at Abqaiq and Khurais has raised concerns on its ability to maintain oil exports with its full capacity.

Saudi Aramco is yet to provide a specific timeline for the restart of full output. A return to normal production may take a few months, media reports said.

Recording its highest one-day percentage gain since 1988, Brent crude oil futures settled at $69.02 per barrel, a rise of 14.6 per cent.

US West Texas Intermediate futures settled at $62.90 per barrel, after climbing $8.05, the highest one-day percentage gain after 2008.