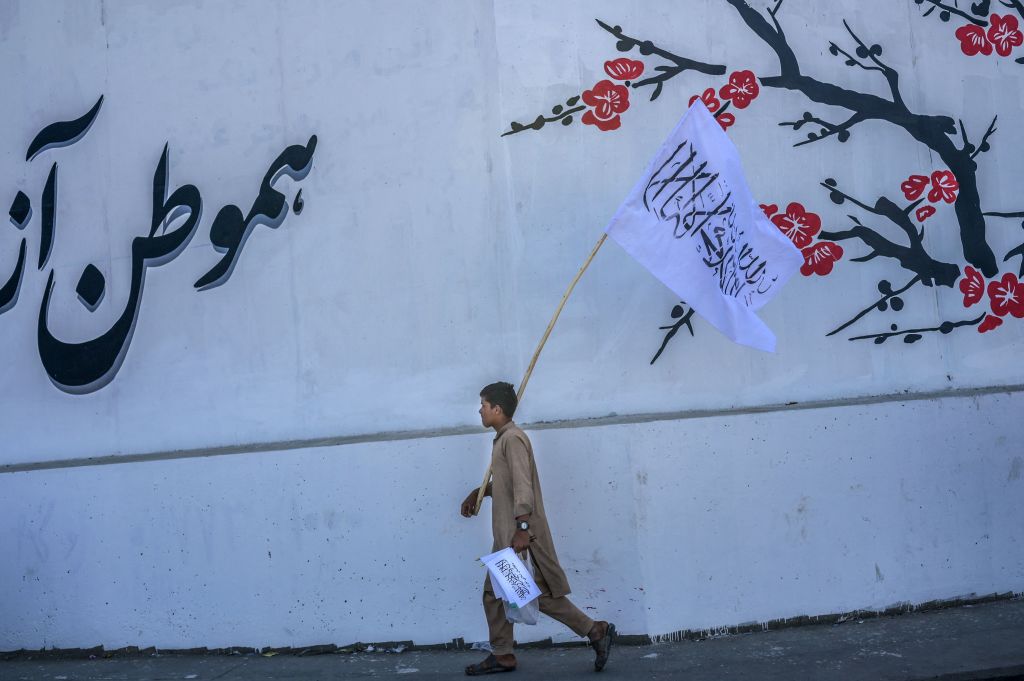 A boy walks along a street selling Taliban flags in Kabul on September 16, 2021. (Photo by BULENT KILIC/AFP via Getty Images)

PAKISTAN has sought to defend the Taliban, saying the hardline group – which has taken over Afghanistan – has “delivered on its promises”.

Pakistan’s ambassador to the United States, Asad Majeed Khan, said on Thursday (16) that the security situation in Afghanistan is “in control” under the new regime which, he said, is “making (the) right noises and right gestures”.

“The Taliban agreed not to attack US troops and not to take over Kabul as long as American boots remained in Afghanistan. They honoured their commitments”, Khan said, blaming deposed president Ashraf Ghani’s “sudden disappearance” for the chaos during the final stages of foreign troops’ withdrawal.

It is in the interest of the international community to engage with Afghanistan to avert an exodus of refugees, a situation which would affect not just its immediate neighbourhood, but also countries far away, the ambassador told a webinar organised by the Stimson Center.

The world should also engage with Afghanistan in the interest of its people, he said, adding, “the Taliban are Afghans too”.

According to the diplomat, “threats and cautions” did not historically work on the Taliban and this meant working together is the way forward.

“Engagement with Afghanistan does not necessarily mean a recognition of the Taliban regime,” Khan said, without elaborating.

On US secretary of state Antony Blinken’s assertion that some of Pakistan’s interests in Afghanistan conflicted with those of America, Khan said Islamabad and Washington “are on the same page” in terms of regional security, peace and counter-terrorism efforts.

“Afghanistan has been a burden on the US-Pakistan relations and the two countries can now move on as their interests are aligned,” Khan said.

He dismissed as “India’s creation” reports that Pakistan forces were involved in operations against groups resisting the Taliban in the Panjshir region of Afghanistan.

Admitting there has been a spike in terror attacks within Pakistan, Khan sought to blame “foreign countries of the region” for all the trouble, without naming them.

He, however, did not answer a question on Pakistan prime minister Imran Khan’s reported assertion that the Taliban “have broken chain of slavery”, which was seen as an endorsement of the actions of the hardline group.