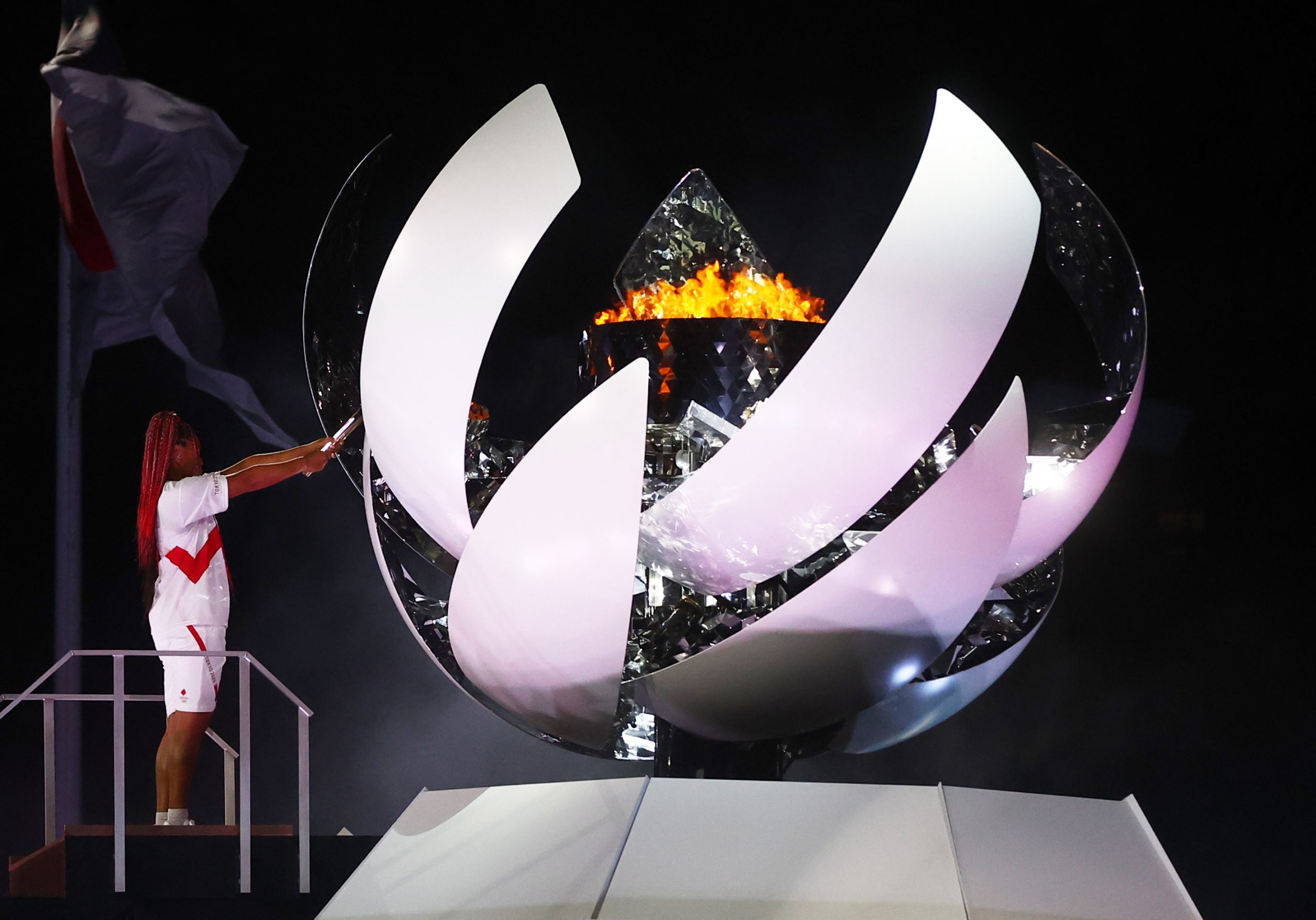 Osaka lifted the torch to the gleaming cauldron, which had unfurled at the top of a ramp representing Mount Fuji, in the highlight of a ceremony that was stripped back over virus fears.

Japan’s Emperor Naruhito officially opened the Games in an eerily empty Olympic Stadium, after Covid-19 forced organisers to ban spectators at all but a handful of venues.

“I declare open the Games of Tokyo,” said the monarch, wearing a white surgical mask, in Tokyo’s 68,000-capacity Olympic Stadium.

Osaka was handed the torch by a group of children from the region around Fukushima which was devastated by a tsunami and a nuclear disaster in 2011.

It was an uplifting moment in a low-key ceremony that unfolded in front of fewer than 1,000 VIPs and several thousand athletes.

In another high point, nearly 2,000 synchronised drones formed a revolving globe over the stadium, to a cover version of John Lennon’s “Imagine”.

A reduced parade of about 5,700 athletes, far lower than the usual numbers, filled into the stadium, not all of them socially distanced but all wearing masks.

International Olympic Committee president Thomas Bach acknowledged the Games would be “very different from what all of us had imagined”.

But “today is a moment of hope”, he said in an address.

The 16-day Games, with 339 gold medals across 33 sports, have a surreal air after the pandemic compelled organisers to make this the first Games with virtually no spectators.

Athletes are tested daily but they are performing on the biggest stage under the constant risk that a positive test could wreck their Olympic dreams.

Fears that the global gathering of 11,000 athletes could become a super-spreader event have made the Games deeply unpopular in Japan, where polls have shown opposition for months.

But hundreds of people gathered outside the stadium cheered and applauded as the fireworks exploded overhead.

Mako Fukuhara arrived six hours before the ceremony to grab a spot.

Japan has spent nearly $15 billion on the Games, including $2.6 billion in extra costs after they became the first to be postponed in modern Olympic history in March 2020.

Tokyo is also battling a surge in virus cases, and is under emergency measures though they fall short of a strict lockdown.

Organisers will hope public opinion turns when the full sporting programme starts on Saturday (24), with swimming, gymnastics, road cycling and tennis among the top attractions.

Attention will focus on a new generation of Olympic stars who are looking to shine after a decade dominated by the likes of Usain Bolt and Michael Phelps.

US swimmer Caeleb Dressel could target seven gold medals and 400 metre hurdlers Karsten Warholm of Norway and the USA’s Sydney McLaughlin are among those hoping to emerge as household names.

The pandemic has not been the only hiccup, with scandals ranging from corruption during the bidding process to plagiarism allegations over the design of the Tokyo 2020 logo.

The controversies kept coming right up to the eve of the Games, with the opening ceremony’s director sacked on Thursday for making a joke referencing the Holocaust in a video from 1998.

Insiders estimate the IOC would have been on the hook for around $1.5 billion in lost broadcasting revenues if the Games had been cancelled.