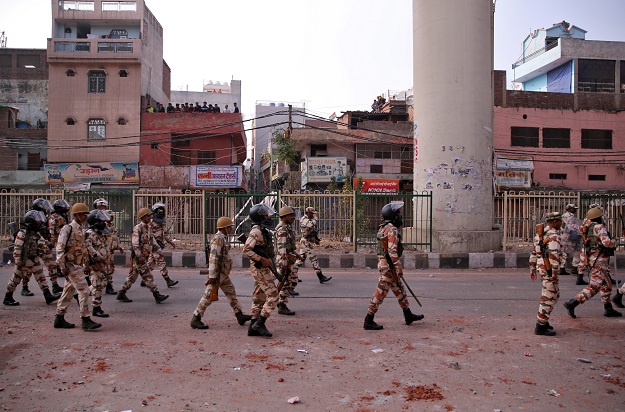 Paramilitary troops patrol in a riot affected area after clashes erupted between people demonstrating for and against a new citizenship law in New Delhi, India, February 25, 2020 (Photo: REUTERS/Danish Siddiqui).
Follow Us

TEN people have been killed and more than 130 injured in some of the worst sectarian violence in India’s capital in years, as rioters went on the rampage in several parts of the city, setting fire to buildings and vehicles and attacking journalists.

Protests against a contentious citizenship law descended on Monday (24) into running battles between Hindus and Muslims in New Delhi’s northeast, with rioters armed with stones, swords and even guns out in force.

Police imposed a restriction on large gatherings in the area on the northeastern fringe of the megacity as the violence continued Tuesday (25) with reports of stone pelting and more structures set ablaze.

“I appeal to everyone to stop the violence. This madness has to stop,” Delhi Chief Minister Arvind Kejriwal, who visited the Guru Teg Bahadur Hospital Tuesday where many of the injured were taken, told reporters, the Press Trust of India reported.

Nine civilians and one policeman have been killed so far, police said, adding that more than 90 civilians and almost 50 police officers were injured.

Delhi Police spokesman Mandeep Randhawa pleaded with locals “not to take the law in their own hands” and said authorities would crack down on troublemakers.

A witness saw at least 10 injured people admitted to the hospital in half an hour, some claiming to have bullet wounds.

“Since yesterday, we’ve been calling the police to enforce a curfew, to send reinforcements,” Saurabh Sharma, a student from a riot-hit area who took his injured friend to the hospital, told.

“But no-one has come. There are only three policemen.”

“The protesters are attacking police wherever they are present and clashing among each other where the police aren’t there,” Kumar said.

Broadcaster NDTV said three of its reporters and a cameraman were attacked by a mob on the northeastern fringe of the city of 20 million people.

“There is hardly any police presence in the area. Rioters are running around threatening people, vandalising shops,” a resident of the poor, migrant neighbourhood of Maujpur told.

The outbreak of violence coincided with the visit of US president Donald Trump, who held bilateral meetings with his Indian counterpart Narendra Modi in Delhi on Tuesday.

Home Minister Amit Shah, whose ministry controls law and order in the capital region, met with senior Delhi government officials and promised to deploy more police if they were needed, Kejriwal said.

Trump said Tuesday after meetings with Modi that the riots were an internal matter for India.