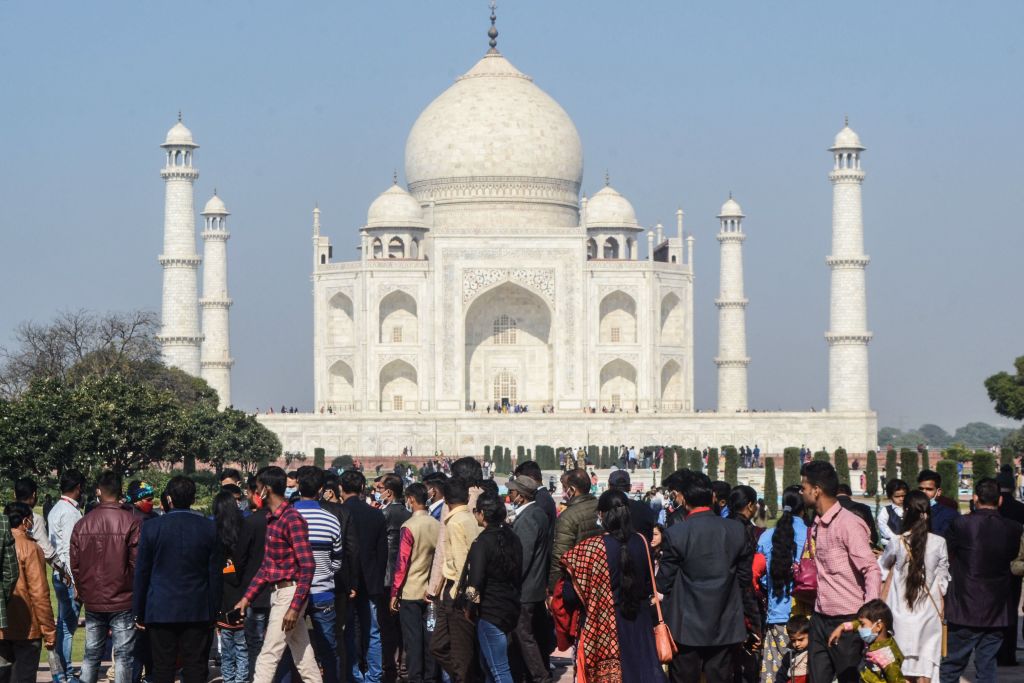 Tourists at the Taj Mahal in Agra on December 19, 2020. (Photo by PAWAN SHARMA/AFP via Getty Images)

TAJ Mahal, one of the world’s top tourist attractions located in India, will reopen on Wednesday (16), more than two months after it was shut owing to the deadly surge in Covid-19 infections that swept the country. Cases and deaths rose exponentially in the world’s second most populous nation in April and May, forcing both the national and various state authorities to impose lockdowns and other restrictions to control the spread of the virus.

Taj Mahal, a 17th century mausoleum which was built by Mughal emperor Shah Jehan for his beloved wife Mumtaz Mahal and is considered among the New Seven Wonders of the World, attracts thousands of visitors per day, was closed in March last year as India imposed a lockdown at the beginning of the pandemic. It reopened in September with restrictions on the number of visitors before closing again in April. The Taj Mahal is located in Uttar Pradesh, India’s most populous state which has been badly hit by the pandemic.

‘Strict Covid protocol to be observed’
The visitors will need to observe a strict Covid-19 protocol even after the tourist hotspot opens. The visitors would not be allowed to touch the shining marble of the structure, the Archaeological Survey of India (ASI), which looks after it, said. “All Covid-appropriate precautions are being taken,” an ASI official told AFP. “Visitors will have to step on a sponge-like platform which will act as a sanitiser for shoes,” he added.

The ASI has also decided to reopen monuments under its supervision as the devastating second wave receded across the country, India Today reported. However, the final decision has been left to the respective state governments and district magistrates under whose jurisdiction the monuments are located.

The closure of Taj Mahal has badly hit Agra’s local tourism and hospitality sectors. People working in the local hotels have found it difficult to survive and accused both the central and state governments of not doing enough to address their plight.