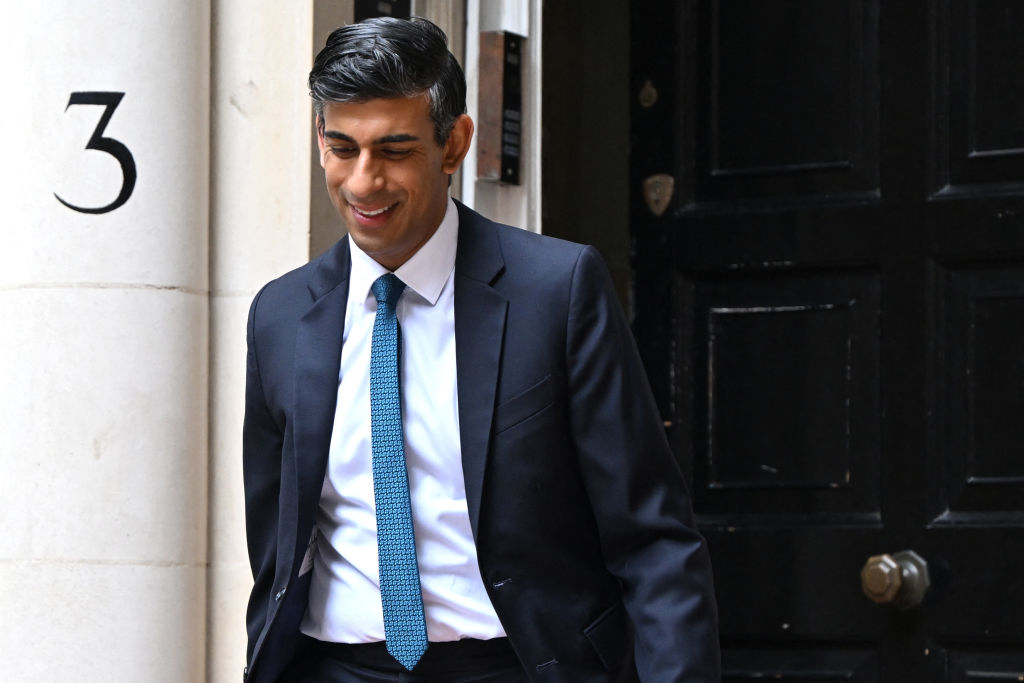 Rishi Sunak, Britain’s former chancellor of the exchequer and candidate to become the next prime minister (Photo by JUSTIN TALLIS/AFP via Getty Images)
Follow Us

Rishi Sunak warned Conservatives Thursday that choosing leadership rival Liz Truss to be UK prime minister risks losing the next election to the Labour party, as he bids to overhaul her huge polling lead among Tories.

Also facing stinging criticism over his pledge to balance the books before cutting taxes, Sunak tried to go on the offensive over Truss’ broader electability as the pair kick off six weeks of campaigning.

“If you look at all the polling evidence that we have… it’s pretty clear that I am the person that is best placed to defeat Keir Starmer in the next election,” he told LBC radio.

“That’s what our members will need to consider,” Sunak added, vowing to deliver victory in the next general election due by the end of 2024.

He has overseen various tax hikes as Britain battles to fix public finances after the coronavirus pandemic while being buffeted spiralling inflation.

She wrote in the Daily Mail that Britain had been “going in the wrong direction on tax, with the tax burden at its highest in 70 years”, and promised to reverse recent rises.

‘Problem’
Truss has also vowed to suspend green levies on energy bills — despite climate change being widely acknowledged to have led to a record-breaking deadly heatwave this week.

She defended her tax-slashing plans — set to cost at least £30 billion ($36 billion) a year — as “affordable”.

That drew derision from Sunak, who argues they will worsen 40-year-high inflation.

“My strong point of view is if the government goes on a huge borrowing spree, that is only going to make the situation worse, and that will mean that this problem that we’ve got will last longer,” he told LBC.

The pair are set to debate live on television Monday, ahead of the first of 12 hustings in front of members on Thursday.

Approximately 200,000 Tory members will be able to vote by post or online from early next month, with the final result due September 5.

The fight has already turned personal during prior TV debates, but Sunak seemingly called for a truce on Thursday, writing that “I like and respect” Truss.

He won the two previous TV duels, according to snap polls, with the second one featuring a no-holds-barred clash with Truss.

Downing Street is reportedly running an “anyone but Rishi” campaign.

He urged his successor to “cut taxes and deregulate where you can to make this the greatest place to live and invest”.

Both candidates have sought to invoke former leader Margaret Thatcher, who remains a hero to many party members.

Like the 1980s leader, Truss is a state school-educated free marketeer who characterises herself as a tax-cutter bringing a no-nonsense attitude to politics at home and abroad.

Her message to the members is that she will “bulldoze” through institutions that stand in the way of reform.

But she was forced to defend a record of ideological and policy U-turns, including her previous support for the Liberal Democrats and opposition to Brexit, which she now supports.

“I was wrong and I’m prepared to admit I was wrong,” on Brexit, she told BBC Radio 4 on Thursday.

“I have developed my political views and ideas. I think the idea that somebody should have the same views, age 17 as age 46 is completely ludicrous.”

Meanwhile Sunak has argued his values and background are “Thatcherite”, charting his rise from an immigrant family of doctors and chemists as a quintessential Conservative success story.

But his popularity with the grassroots has faded since questions were raised over his family’s tax arrangements, and as inflation sky-rocketed to a 40-year high of 9.4 percent in June.