Splendid salute to a heroic soldier 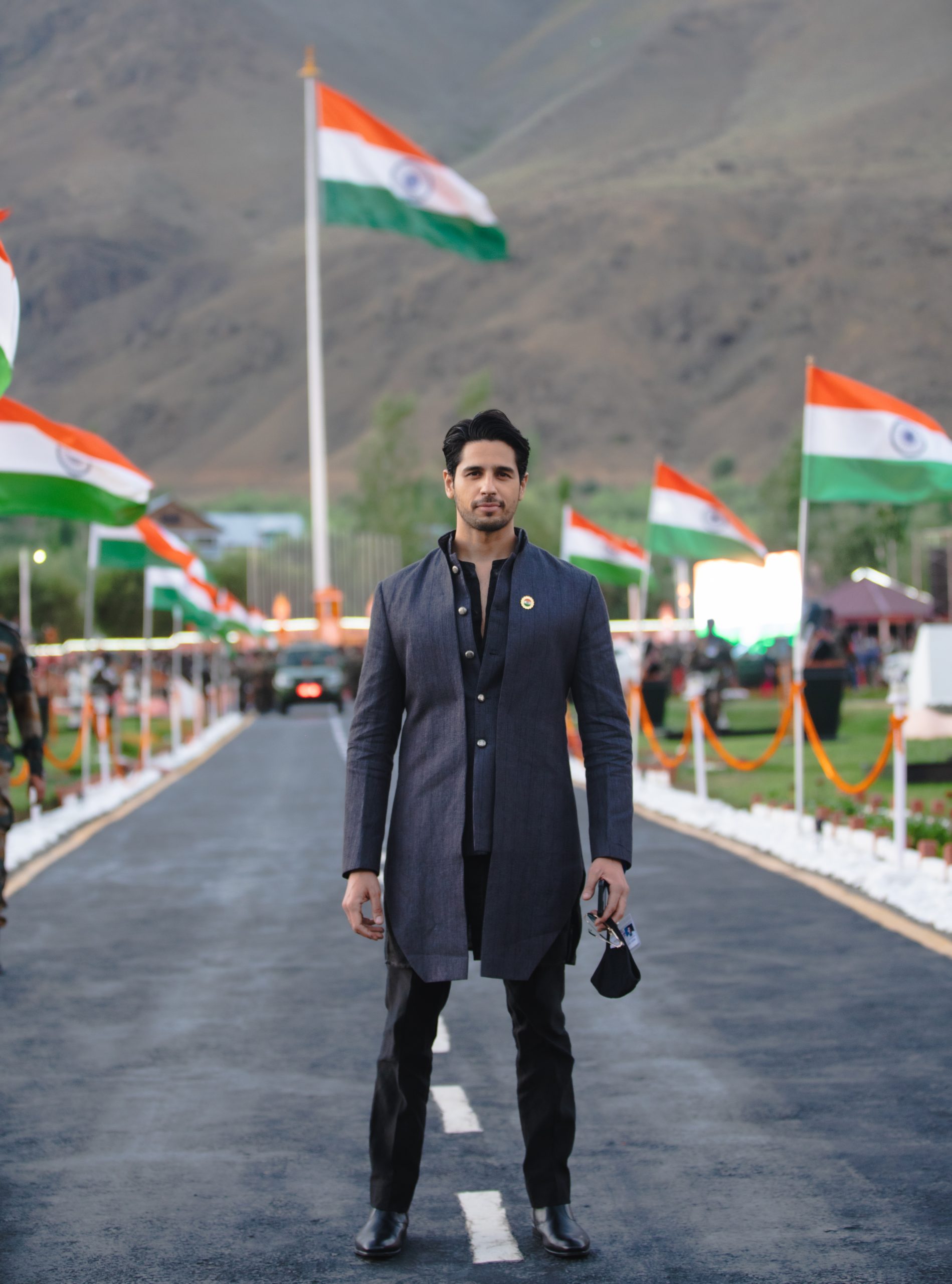 VERSATILE actor Sidharth Malhotra has had a rollercoaster career since being launched as a leading man with 2012 film Student of the Year, but that hasn’t stopped the brave Bollywood star from pushing himself and crossing new cinematic horizons.

This has resulted in an impressive ability to take on more challenges and perhaps the biggest of these is his new film Shershaah. The newly released army drama based on real life events has its world premiere on Amazon Prime Video on August 12 and sees him take on the role of Captain Vikram Batra, who lost his life fighting for his country and was awarded India’s highest military honour, the Param Vir Chakra.

Eastern Eye caught up with Sidharth to discuss Shershaah, his intensive preparation, experience of working with Kiara Advani and coping with comparisons.

How did it feel wearing the Indian Army uniform with the name Captain Vikramt Batra on it?
It’s a lot of responsibility and comes with so many expectations. I think any Indian boy who will wear an army uniform can’t help but change his posture, stand up straight, and have that persona; that’s the reputation, charm and vibe of the Indian army that we have here. So, there is already an inherent personality change that happens once you wear the uniform. Now, if specifically, I am donning Captain Vikram Batra’s uniform, there is more responsibility on my shoulders. But, without taking so much of that pressure, we have just tried to make the best version of his life story to hopefully inspire people with his sacrifice and what he stood for, and maintaining the balance of keeping it entertaining and authentic at the same time.

A lot of hard work seems to have gone into it…
A lot of hard work has gone into the prep and detailing. I am really happy the trailer is getting a great response. It’s a film I am extremely attached to and feel so passionately about. It’s a passion project and the first time I am playing a real-life hero. So, I’m really looking forward to people seeing it on Amazon Prime Video.

What preparations did you do for your character in Shershaah?
The prep started from meeting Captain Vikram Batra’s friends, colleagues, and family. You get to know a lot about a person once you meet their family. The first person I met was Vishal Batra (Vikram Batra’s brother) and his father, just to talk about how he was as a child and teenager. I think what I really gauged was that he was a loveable Punjabi boy from Palampur, who studied in Chandigarh. Everybody could not help but just have very good vibes from him or for him. I think that good-hearted charming Punjabi boy is something that I have tried to portray in the film. And then, he had another aspect to his personality, which is when he went to the forces.

Tell us about that?
Apart from being this loveable Punjabi boy, he was also a very focused leader and a go-getter. He was slightly impatient, would lead the pack and  say that ‘come on boys, let’s do it now, let’s go for it’, which gave a lot of sense of security to his subordinates. They used to say in Hindi ‘jab Batra sahab lead karte hai, toh hame bada sukon milta hai’, (when Batra sir leads, we feel at peace and safer). So, I feel it’s a mix of these two personalities that was the emotional prep of it. I met a lot of people and had a lot of conversations, whether it’s with Sanjeev Jamwal, who was his colleague, or his family and parents. I visited his home in Palampur and saw all his belongings in his house.

Tell us about that visit to his house?
I remember that at his home in Palampur, on the first floor, they have a lovely museum of all his belongings which tell you a lot about him as a person, with his diaries, clothes, sunglasses, camera, and medals. So, it was extremely touching to live this person’s life who has left such an amazing legacy. I felt I had to give it my all because, otherwise, I won’t be doing justice to this role, and especially this family. For them, this is not a commercial product; even I would not look at this film as a commercial product. It was a lot of prep, blood and sweat.

What about the physicality of the role?
There was also a physical practice of it, which is getting into the army training, including training with army personnel in Mumbai – the ammunition, hierarchy, and body language. There was also the training in Kargil with the army on that terrain and learning the etiquette. So, a lot of prep has gone into it. We have tried to keep it as authentic as possible.

What was the experience of working with Vishnuvardhan, who has directed films in south India and makes his Bollywood debut with Shershaah. Was there a difference to what you are used to?
No, I didn’t feel any difference per se because of where he came from and the kind of movies he made in the past. And he has worked as an assistant in Hindi movies. But, nonetheless, it’s Vishnu’s first film in Hindi, and his first film with Dharma Productions as well. He was extremely eager from day one. I remember meeting Vishal Batra much before Vishnu came on board. There was a different team and production house. Somehow things were taking too long, and they were not really coming up with the correct project. I suggested that they let me try and approach Dharma Productions for this.

What happened next?
At that time, Dharma had not made a biopic. This was the first biopic they said yes to, and then we had Vishnu coming in the team through our writer Sandeep (Srivastava). He was enthusiastic about it from the word go and eager to make this film in Hindi. I knew that somebody with his experience will only help the film. The way he has shot the army portions, especially the battlefield, is something fresh and new for Hindi cinema or for India. So, it’s been a great experience working with him. He is energetic, enthusiastic, and technically very sound, which are all great qualities to have in a director. He used to get very happy with me and I was like no, ‘one more take’. He would be like ‘no we have it’, so that’s also good as it shows his sense of confidence. I think it’s a great debut to make in Hindi for a director.

This is the first time you have worked with Kiara Advani. How was your experience of working with her?
I met Kiara at the screening of Lust Stories and that’s the time when we really thought of approaching her for Dimple Chima’s role. We needed a character that gives you a sense of honesty and Dimple is the grounding factor in Vikram Batra’s life. We approached Kiara and were very happy that she came on board. I think the love story is one of the strongest parts in the film. Dimple is a Sardarni (Sikh woman) from Chandigarh, and speaks in Punjabi, so Kiara really worked on the dialect. I am from a Punjabi family, so it was easier for me because Vikram Batra is from the same cultural background. So, it’s something that people are liking in the trailer. I am happy that this pairing is working and hopefully, people will love it in the film as well.

What about comparisons with other actors who have played Captain Vikram Batra on the big screen, especially Abhishek Bachchan in the film LOC Kargil. What do you have to say about that?
That film is in the past, ours is in the present. So, I am not really venturing into comparisons because that’s something not on my mind right now. First and foremost, I feel a lot of responsibility towards the family as to what they think how we have portrayed their son’s life. When I met Vishal Batra, who saw the film a couple of months ago while it was in the edit, he was extremely emotional and touched.

How was that conversation with Vikram Batra’s brother?
He was like ‘I have not seen Vikram’s life on the battlefield and for me now, whenever I picture him in the battlefield, I get visuals of the film and you’. So, that was a very emotional point. I don’t know if it’s a good or bad thing that we are giving visuals to that traumatising memory, but I think that’s more important as opposed to comparisons and other things.

You make your digital debut with Shershaah, but will we be seeing you in a web series as well?
Well, let’s see, but nothing is planned. Even this (Shershaah’s digital release) wasn’t planned, but it’s at present the safest way to release your film and get people to watch it. This medium was always there; all our libraries of previous movies are there on these platforms. So, it’s not something we are not aware of; it’s just that the process has changed. Now, there’s no theatrical release, so at present all movies are going directly to a streaming site. As far as me doing a web series is concerned, well, it has to be an exceptional, character-based story and something that excites me. Something I would not get to do in movies as you can get into detailing in web series. But, as of now, I haven’t really liked or confirmed something.