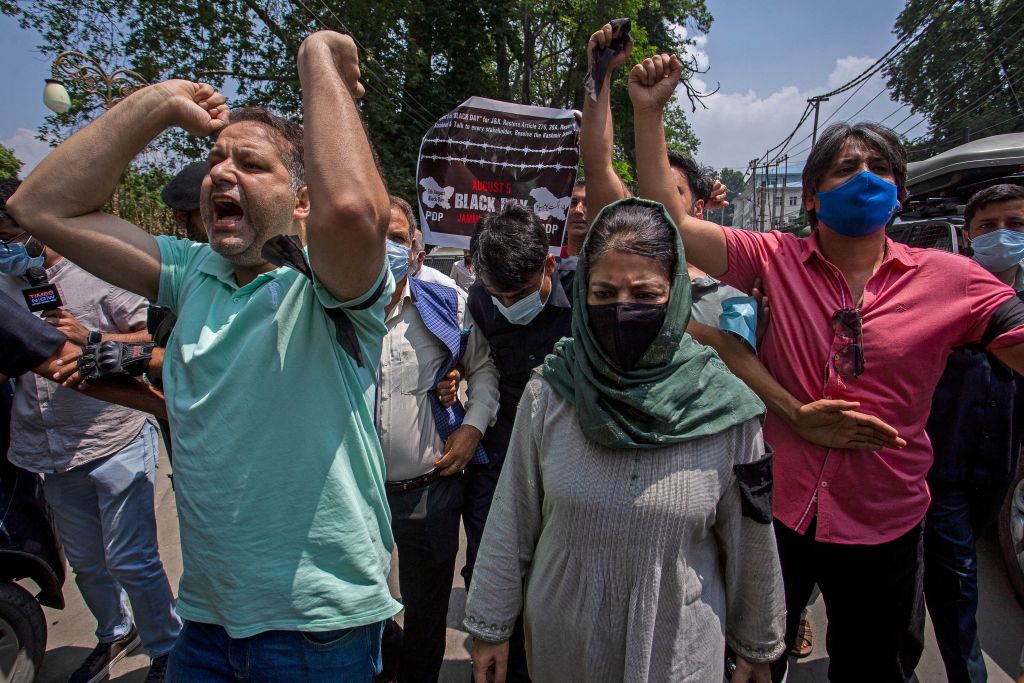 People’s Democratic Party leader and former chief minister of Jammu and Kashmir Mehbooba Mufti (C) along with her party’s supporters marches to mark the second anniversary of New Delhi ending the region’s partial autonomy, in Srinagar on August 5, 2021. (Photo by ABID BHAT/AFP via Getty Images)

HUNDREDS of extra police and troops were deployed in Indian-administered Kashmir on Thursday as separatist groups called for a shutdown to mark a “black day” on the second anniversary of New Delhi ending its special status.

Prime minister Narendra Modi’s government scrapped the Muslim-majority region’s partial autonomy on August 5, 2019, and split it into two federal territories. Thousands were arrested, scores of whom remain behind bars two years on.

Suspected rebels fired live shots in the air in the heart of the congested old town Srinagar where a low-intensity explosive device also went off, witnesses said.

In the Sopore area, unknown rebels fired at police as authorities tried to force shopkeepers observing the shutdown to open their doors, an officer said. The district police, however, denied the incident took place.

Top separatist leader Syed Ali Geelani, 90, had called for a general shutdown to mark a “black day” in protest against “India’s naked aggression”, in a Twitter statement by his Pakistan-based representative.

The call was supported by several smaller separatist groups who also challenge India’s rule over Kashmir.

One group, headed by Kashmir’s incarcerated chief cleric and politician Mirwaiz Umar Farooq, appealed to “citizens of India and the world at large” to see how India’s actions two years ago “complicated” the dispute over the territory further.

On Thursday (5) most shops remained closed in Srinagar and there were few cars on the road, but police in the capital city were seen asking shopkeepers to open.

Many businessmen, without wishing to be named, said police had threatened them. Local reporters said officers were breaking locks on shutters.

“I was recording video of shuttered shops when police officers arrived and took my photos while I was working and accused myself and journalists of instigating a shutdown,” photojournalist Umer Asif said.

Witnesses and traders in three towns in the volatile southern Kashmir valley also said police were threatening and forcing shopkeepers to open their stores.

Former Kashmir chief minister Mehbooba Mufti, who along with dozens of other local politicians spent months incarcerated after being arrested in the 2019 clampdown, led a protest in Srinagar that police stopped from marching to the city centre.

“When unbridled oppression is unleashed & gross injustice heaped there is no other choice but to resist to exist,” she tweeted.

Bashir Ahmad, a shopkeeper in downtown Srinagar, said that since the “injustice” of what happened in 2019, people no longer feel “safe and secure”.

“Anyone who speaks up is being crushed without reason,” he said.

About 1,000 people marched in Muzaffarabad – the capital of Pakistan-administered Kashmir – where protesters chanted anti-Indian slogans and burnt the country’s flags.

In Islamabad, Pakistan’s president and foreign minister led a rally of about 500 people while traffic was halted for a minute’s silence in other major cities.