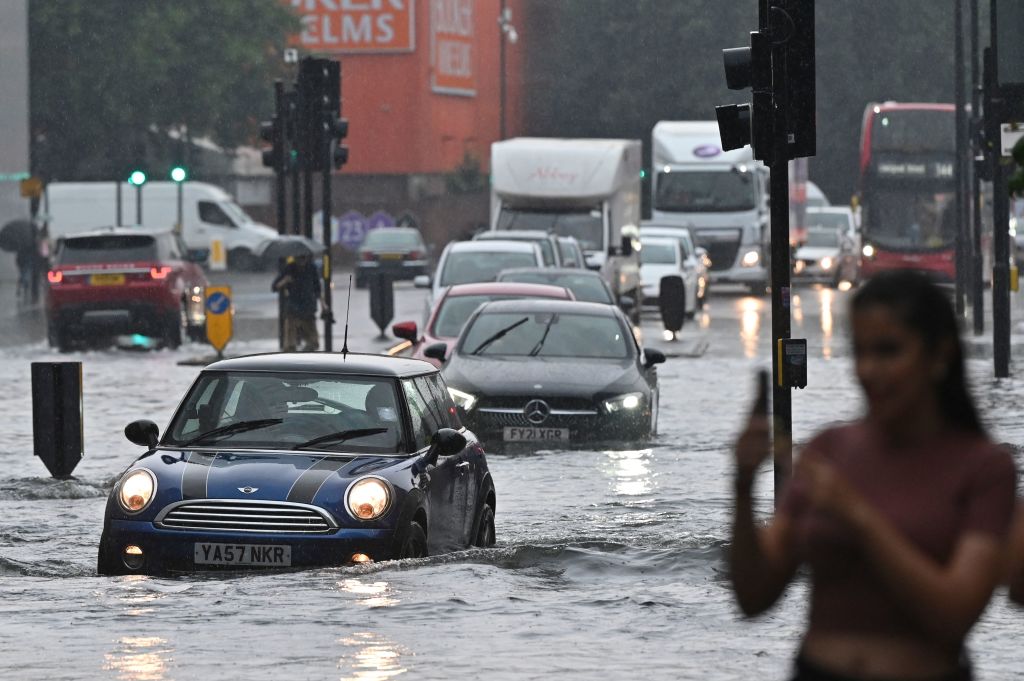 Cars are driven through deep water on a flooded road in The Nine Elms district of London on July 25, 2021 during heavy rain. (Photo by JUSTIN TALLIS/AFP via Getty Images)
Follow Us

SCIENTISTS have urged the UK government to take adaptive measures to cope with the impacts of extreme weather.

They also warned that flash flooding of the type seen in London this weekend will become more common occurrence as the climate crisis worsens, The Guardian reported.

Climate policy in the UK has focused on cutting greenhouse gas emissions, which is a primary concern, to reduce the human impact on the climate and ensure global heating does not reach catastrophic levels.

The newspaper report, quoting experts, has said that adapting to the impacts of extreme weather will require a thorough overhaul of the UK’s infrastructure, encompassing not only drainage and water supply systems, and transport, but also energy supply and communications networks.

Buildings will need to be redesigned and public areas revamped to include better drainage channels and storm drains, while more innovative approaches could include porous pavements, it added.

A lack of green spaces and vegetation, and the paving over of many areas without heed to flood risk, has compounded the problem in many cities, including London, experts warned.

Dr Jess Neumann, a hydrologist at the University of Reading, told The Guardian: “Flooding from intense summer rainfall is going happen more frequently. No city, town or village is immune to flooding and we all need to take hard action right now if we are to prevent impacts from getting worse in the future.”

“Planning and development need to consider flood risk from all sources – river, groundwater and flash floods – and adapt accordingly. It is not acceptable to keep paving over the land and expect the public to deal with the water when it comes into their homes.”

Liz Stephens, associate professor of climate resilience at Reading University, told the newspaper: “The UK still has a complicated set of roles and responsibilities for surface water flooding risk. Lead local flood authorities take responsibility for managing it, the Environment Agency for mapping it, and the Met Office for providing early warning. This makes it difficult for the public to have a good understanding of their own risk and what can be done.”

Earlier this year, Parliament’s public accounts committee warned that the government was not doing enough to prevent damage from flooding, and said councils and local authorities needed much more help, including more funding.

Meg Hillier, the chair of the committee and a London MP, has said that the weekend’s floods highlighted the government’s inaction.

She added: “Flash flooding from torrential rain causes havoc for those affected and yet the lack of resources for councils, which are responsible for the mitigation of urban flooding, is hampering the response which businesses and householders so desperately need.”

London mayor Sadiq Khan has said that his powers were limited on flood defences, but added that he was dealing urgently with Thames Water on the issue.

“This is not the first time in recent weeks that London has been hit by major flooding. Despite having limited powers in the area, it remains a key priority for myself and London’s council leaders that more is done urgently to tackle flooding and the other impacts of climate change. This includes continuing to urge Thames Water to address localised issues with infrastructure that may exacerbate the impact of flooding,” Khan told The Guardian.

According to the report, insurers have warned that UK households and businesses in some areas could find themselves uninsurable if stronger action is not taken.