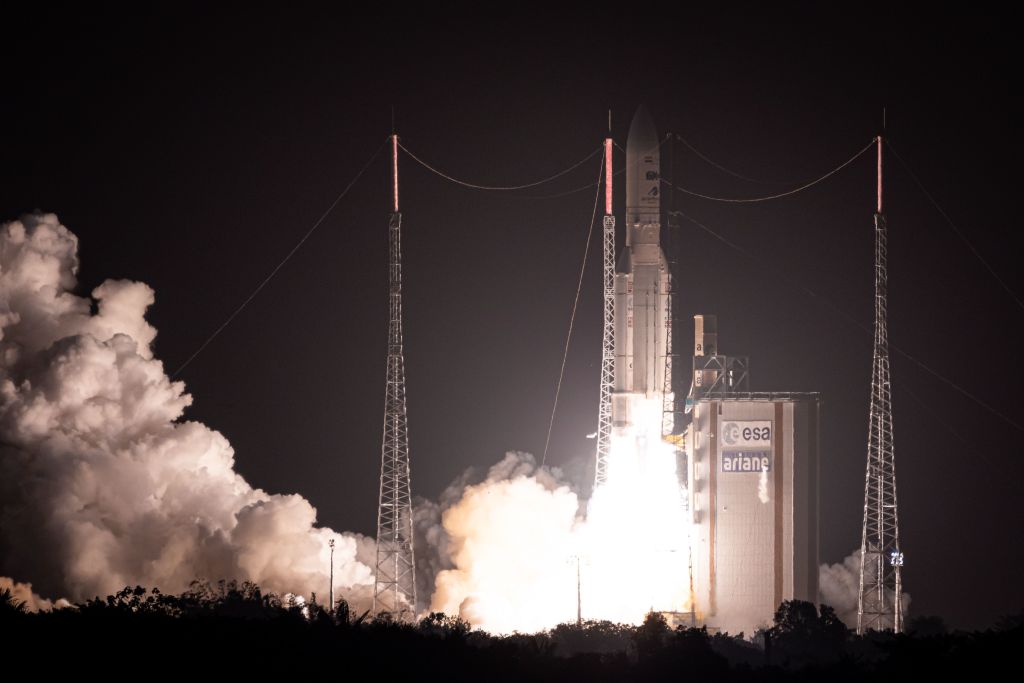 An Ariane V rocket lifts off the launchpad at the European Space Center at Kourou in French Guiana, on the November 26, 2019. The launcher carried the Inmarsat GX5, a mobile communications satellite built by Thales Alenia Space for Inmarsat. (Photo by JODY AMIET/AFP via Getty Images)

The market for satellite business is fragmented with “too many players” and there is a need for mergers, he said.

“I think that the industry will need consolidation. A lot of new money is flooding into the sector. A lot of players are willing to invest tens of billions,” Suri, 53, told The Telegraph.

As its quarterly sales went up 24 per cent year-on-year, Inmarsat is planning to consolidate its position in the market with a major upgrade to its L-band services to offer faster speeds and smaller low-cost terminals for its air, land and sea customers.

Inmarsat has a clear roadmap to “reinvigorate” L-band, the backbone of its low bandwidth communications and safety services for shipping, aviation and government, said Suri, an engineering graduate from India’s Manipal Institute of Technology.

The investment will boost Inmarsat’s core maritime market, he said. “For Inmarsat to grow, maritime needs to return to growth,” he said. “This year we will have market-leading growth and maritime should be starting to grow as well.”

It will be supported by the two new I-6 satellites, ordered from Airbus in 2015, with the first scheduled to launch at the end of this year and both in commercial service in the second quarter of 2023.

The upgrade follows Inmarsat’s announcement of a new constellation of low earth orbit satellites, which it will combine with 5G mobile and its GEO satellites in a network to increase capacity in high-demand areas.

Suri said the reliability and ubiquity of the L-band made it particularly useful for the internet of things (IoT).

It opens up a lot of new sectors, “and we are repositioning our enterprise business for growth,” he said. “Our focus has been on mining, oil and gas, but now it is increasingly on utilities, railways and agriculture.”

Previously listed in London, Inmarsat was sold in 2019 to a consortium of UK-based Apax Partners, US-based Warburg Pincus, Ontario Teachers’ Pension Plan and the Canada Pension Plan Investment Board for $3.4 billion (£2.47 bn).