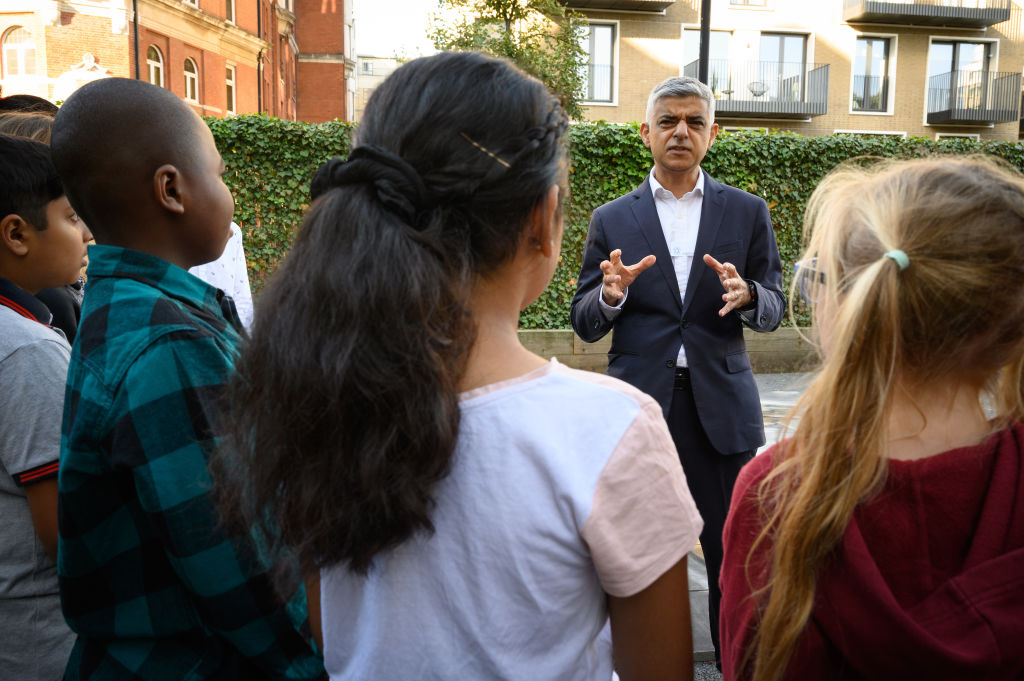 Mayor of London Sadiq Khan speaks to pupils ahead of a photocall at Prior Weston primary school before delivering a speech on his plans to tackle climate change to environmental groups and members of the media at Barbican Centre on September 23, 2021 in London, England. (Photo by Leon Neal/Getty Images)

The Breathe London community programme, in partnership with Bloomberg Philanthropies, is set to empower local action on air quality ahead of the UK hosting COP26 and the Ultra Low Emission Zone expansion later this month, a statement has said.

As part of the project, 60 free air quality sensors will be provided to local communities, providing access to real-time air quality data. These sensors are also now available to purchase directly by organisations and individuals wishing to monitor air quality in their local area.

New data from City Hall released on Tuesday revealed that communities with higher levels of deprivation and from a black, Asian and minority ethnic (BAME) background are still more likely to be exposed to higher levels of air pollution.

However, the gap between the most and least deprived areas of London for exposure to harmful nitrogen dioxide (NO2) has narrowed by up to 50 per cent since 2016, it added.

The additional sensors will bring the capital’s total to 350 sensors. Khan will also provide two sensors for the South circular which will be installed in collaboration with Rosamund Adoo-Kissi-Debrah, co-founder of the Ella Roberta family foundation.

Sensors will also be installed in the British Library, Kew Gardens, the National Gallery, the Science Museum, the Imperial War Museum and Serpentine Galleries, the statement further said.

“I’m more determined than ever to do everything we can in London to consign air pollution to the history books. A key step will be the expansion of the world-first Ultra Low Emission Zone up to the North and South circular roads, starting on 25 October, which will improve the health of all Londoners and help us deliver a cleaner, greener and fairer city,” said Sadiq Khan.

“The new air quality sensors is an important part of our work to raise awareness of toxic air pollution across London, making it easier for Londoners to monitor air quality in their local area.”

An estimated 3.8 million Londoners are set to directly benefit from the expansion of the low emission zone scheme, the statement added.

Michael R Bloomberg, founder of Bloomberg L.P. and Bloomberg Philanthropies, said: “Air pollution is a deadly problem in cities all over the world, and technology is giving us new ways to measure it and understand its effects. By putting that technology in the hands of communities, this partnership will empower people to push for smart policies and give elected leaders the data they need to save lives in London.”

A study by Imperial College London’s environmental research group, commissioned by City Hall via Imperial Projects, has found that air quality improvement will increase the average life expectancy of a child born in London in 2013 by six months.

Dr Ben Barratt Reader, environmental exposures and public health lead at Imperial College London, which manages the project, said: “This next phase of development of the Breathe London network really puts air quality monitoring into the hands of London’s communities. We’re genuinely excited to see the inspiring and impactful uses to which these monitors will be put by Londoners to improve the health and environment of their neighbourhoods and our city“.