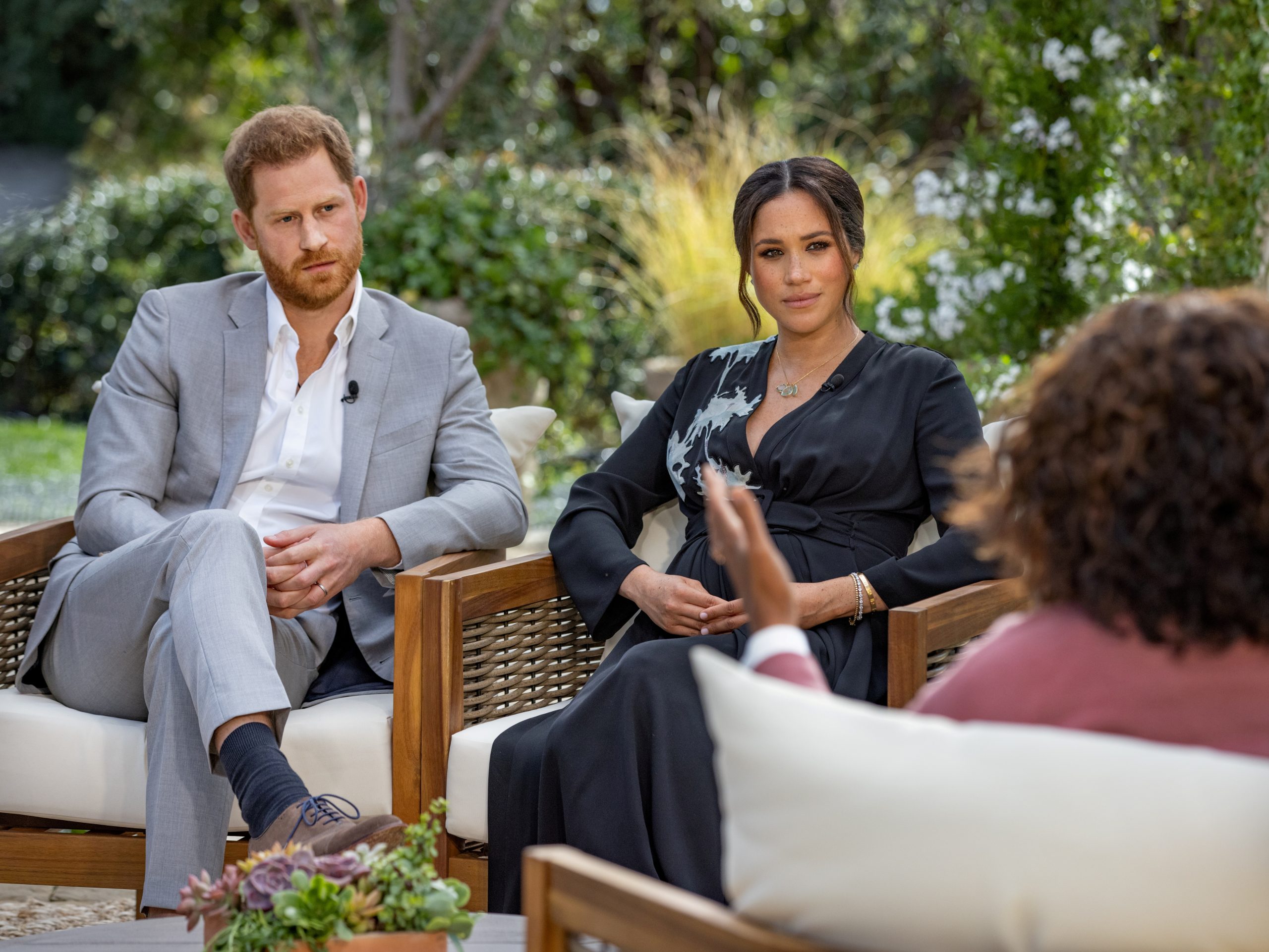 SPEAKING OUT: Prince Harry and Meghan, Duchess of Sussex, with Oprah Winfrey

ACCUSATIONS of racism against the British royal family by the Duke and Duchess of Sussex have shown that racial discrimination is “still pervasive in British society”, commentators have said.

In a wide-ranging interview aired in the UK on Monday evening (8), the duchess spoke about her experiences with racism, struggles with her mental health and the reasons for stepping down as senior royals last year.

And in a shocking revelation, the duchess (who describes herself as biracial) alleged that an unnamed member of the royal family had questioned “how dark” their then unborn son Archie’s skin might be. The duke, who also took part in the interview, later clarified that the comment did not come from either the Queen or Prince Philip.

The duchess described some unidentified members of the royal household as brutal, mendacious and guilty of racist remarks.

She also said the isolation and the barrage of negative press during her time as a royal had pushed her to the brink of suicide, adding that her calls for help were ignored. “I just didn’t want to be alive anymore,” she admitted during the interview with host Oprah Winfrey. “That was a very clear, real and frightening constant thought. And I remember how he (Harry) just cradled me.”

The couple withdrew from their royal duties last January.

The Runnymede Trust’s Rohini Kahrs said the interview and the response to it was a reminder that racism and race insensitivity were “still pervasive in British society”. “Coming from a woman with a lived experience of racism, and as the mother of the Queen’s great-grandson, there will be many in Britain who feel grateful to Meghan for speaking up and reflecting their own struggles,” Kahrs told Eastern Eye.

She added: “The UK has come a long way, and we can take the issues raised from (the interview) and the wider conversation and channel it into a healing process where these issues are looked at and addressed.”

Sunder Katwala, director of the thinktank British Future, said the wedding of the duke and duchess had initially been seen as a “symbol of positive change”. The couple’s unhappy experience is, at the least, a missed opportunity for the royal family, he said.

“Nobody who was not directly involved can adjudicate any of the specific allegations made,” Katwala told Eastern Eye on Tuesday (9). “But it would only make things worse if the monarchy now becomes the latest battleground of a ‘culture war’ over race and identity, especially one that divides opinion between generations, and which sees black and white Britons hold contrasting perceptions about the media’s treatment of Meghan Markle.”

Priyamvada Gopal, professor of postcolonial studies at the University of Cambridge, agreed many thought the role of the duchess in the royal family was a step toward “modernising the monarchy”. “Meghan was going to bring diversity,” Prof Gopal said. “But I think now we are reminded that these are not institutions that take easily to diversification, to racial diversity. Perhaps the monarchy has a race problem, a whiteness problem – and we’ve seen that manifested here.”

Talking about the concern over the skin colour of the couple’s son, Kahrs said the claims were “deeply upsetting”. “His skin colour should not be a factor for anything,” she said. “In many ways, Archie could be the symbol of modern Britain.”

However, the journalist and commentator Yasmin Alibhai-Brown admitted she was not surprised by the revelations. She recalled the reaction when it was revealed that Diana, Princess of Wales (Harry’s late mother) had had relationships with men of ethnic heritage, including British-Pakistani heart surgeon Hasnat Khan.

“Remember how the press and the firm (royal family) reacted – all that speculation about how the half-siblings of the future king could be mixed race and how trying that would be for the Queen and her clan,” she told Eastern Eye.

Alibhai-Brown, who said she watched the interview on Monday, thought the couple came across as “real, troubled, honest and, a little nervous, scared even”. “They know well the revenge that will come to burn their skins, and fresh campaigns to silence them,” she said.

Prof Gopal said the beliefs of the monarchy were “deeply tied” up with white supremacy, and noted the historic links between the royals and colonialism. “I don’t think the monarchy has examined its ties to white supremacy,” the academic said. “When you look at the balcony (of Buckingham Palace), and you look at who the monarch is seen with, by and large, this is a heavily white milieu.

Some have also focused upon the duchess’s mental health struggles while living in the palace. Alibhai-Brown noted her comments on the lack of support she received, even after reaching out for help.

She pointed out the recent efforts by some of the younger members of the royal family to raise awareness about mental wellbeing, including the Heads Together campaign fronted by the Duke and Duchess of Cambridge. “If they can’t and won’t help their own, we know all of that is just PR posturing,” Alibhai-Brown said.

The duchess also touched upon the barrage of hate that she had experienced from some outlets of the British media and on social media platforms. She said race and social media have made dealing with the “toxic environment” of the British press different for her than other royals.

“Unfortunately, if members of [Prince Harry’s] family say, “Well this is what’s happened to all of us,’ if they can compare the experience that I went through… Kate was called ‘Waity Katie’ waiting to marry William,” she said. “While I imagine that was really hard – and I do, I can’t picture what that felt like – this is not the same. And if a member of his family will comfortably say, ‘We’ve all had to deal with things that are rude’, rude and racist are not the same.”

According to a CNN report in 2019, palace staff were alleged to have installed software to filter out racist slurs on social media responses to the duchess. The same year, research by advocacy group Hope Not Hate (HNH) also revealed the scale of racist abuse which the 39-year-old royal faced on social media.

A spokesperson for the group told Eastern Eye that the duchess had raised “real questions” about her treatment in the media. “She has sparked a timely debate about race and the press,” they said.
“Her experiences speak to the need to understand how racism can operate in our society – especially as it affects women of colour – and how much more there is to do to make meaningful change.”

The Queen and the royal family issued a statement on Tuesday evening in response to the Duke and Duchess of Sussex after they accused a family member of making a racist remark about their son and courtiers of ignoring her pleas for help with her mental health issues.

The statement read: “The whole family is saddened to learn the full extent of how challenging the last few years have been for Harry and Meghan. The issues raised, particularly that of race, are concerning. While some recollections may vary, they are taken very seriously and will be addressed by the family privately.

“Harry, Meghan and Archie will always be much-loved family members.”

Prime minister Boris Johnson declined to comment on the accusations of racism after the interview, saying: “When it comes to matters to do with the royal family, the right thing for prime ministers to say is nothing.”

Other public figures who commented about the interview include US president Joe Biden, whose spokesperson said he praised anyone for having the courage to speak out about mental health.

Former US secretary of state Hillary Clinton also defended the duchess, referring to the UK press coverage on her as “cruel”.
“The fact that she did not get more support and the reaction was, ‘let’s just paper it over and pretend that it didn’t happen and keep your head down,’” Clinton said. “Well, this young woman was not about to keep her head down – this is 2021.”

Labour leader Sir Keir Starmer has called for the duchess’s claims to be taken seriously. He said: “Nobody should be prejudiced (against) because of the colour of their skin or because of their mental health issues.”

On social media, Labour MP Nadia Whittome suggested the duchess was being treated differently because of her race. “It says a lot about the priorities of the royal family and tabloid press when Prince Andrew has an easier ride than a young black woman,” she said.