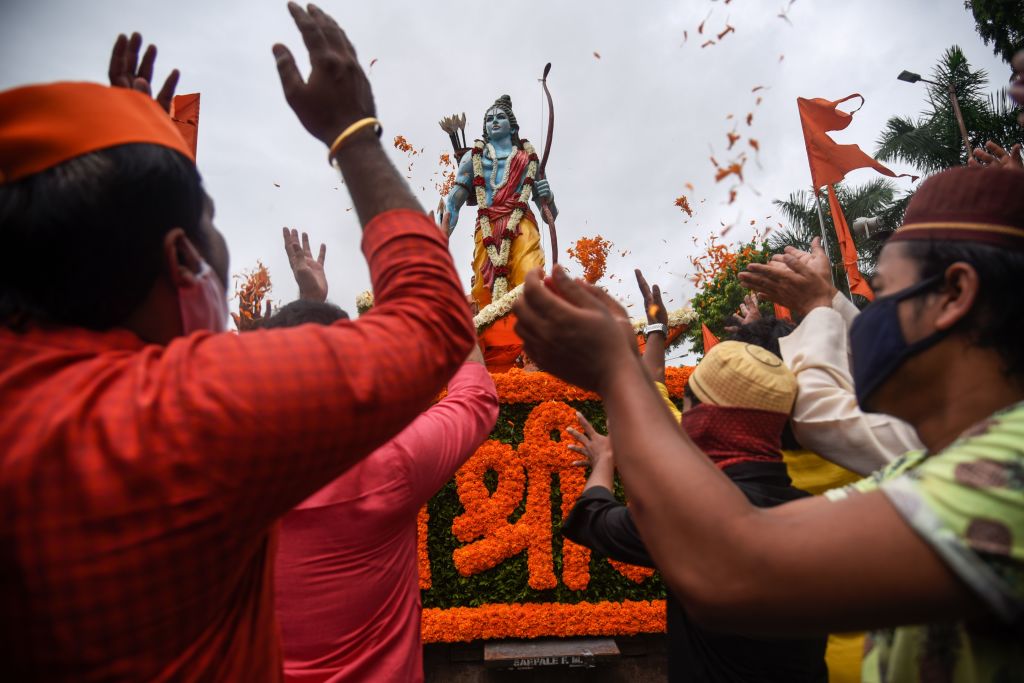 People from the Hindu and Muslim communities celebrate around a 7-feet tall statue of Lord Ram the foundation stone of a Lord Ram temple in Ayodhya, in Pune on August 5, 2020. (Photo: SANKET WANKHADE/AFP via Getty Images)

“Felicitations to all for the foundation laying of Ram Temple in Ayodhya. Being built in tune with law, it defines India’s spirit of social harmony and people’s zeal. It will be a testimony to ideals of Ram Rajya and a symbol of modern India,” Kovind tweeted

Felicitations to all for the foundation laying of Ram Temple in Ayodhya. Being built in tune with law, it defines India’s spirit of social harmony and people’s zeal. It will be a testimony to ideals of RamRajya and a symbol of modern India.

Bhagwat said the RSS, which spearheaded the temple movement, said: “We had taken a resolution. I remember the then RSS chief Balasaheb Deoras telling us that we will have to struggle for 20 to 30 years, only then will this be fulfilled. We struggled and at the beginning of the 30th year, we have attained the joy of fulfilling our resolution.

“There is a wave of joy in the entire country today. There is a pleasure about the fulfilment of centuries of hope. The greatest joy is because of the establishment of the self-confidence, which was lacking, today to make India self-reliant.”

He added that so many people who toiled and made sacrifices for the temple – such as Hindutva stalwart and former deputy PM LK Advani — could not attend the ceremony due to the pandemic.

“There are many who couldn’t come here. I am sure all of them, including Advani ji, would be watching the event from his home and will be glad today to see their dream come true,” Bhagwat said. “There are some who should’ve come but couldn’t be invited because of the situation.”

He lauded Modi for his “bold steps” towards building a new India, and stressed on the concept of “Vasudhaiva Kutubhkam — the world is one family”. ”

“We believe in taking everyone along,” Bhagwat added. “Today is a new beginning of a new India.”

Adityanath — who was a youth leader when the Ram Janmabhumi movement gathered steam in the late eighties — hailed Modi’s “foresight and wisdom” for achieving “a peaceful resolution of Ram temple issue”.

“The power of Indian democracy and judiciary under the leadership of Modi has shown the world how solutions to problems can be found through democratic and constitutional means,” he added.