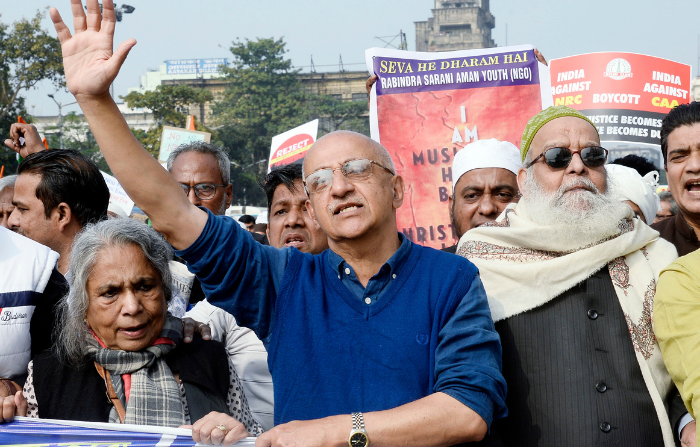 Activist Harsh Mander (in blue) shouts slogans with supporters during a protest against the Citizenship Amendment Act and National Register of Citizens in Kolkata in the eastern Indian state of West Bengal in January 2020. (Saikat Paul/ANI Photo)

AN official raid on the offices and residence of a noted human rights activist in India critical of its Narendra Modi government has created an outrage in the country. The enforcement directorate (ED), a government agency in India that tackles financial crime, searched the premises of Harsh Mander in Delhi on Thursday (17).

While the officials said they were probing a money-laundering case against the 66-year-old activist, critics called the move an attempt to “threaten, intimidate and silence” voices of dissent.

At least 600 activists, academics and artists condemned the ED’s raids against Mander and released a public statement saying the man has been continuously harassed by several state agencies over the past one year.

“Over the past year, Harsh Mander and the CES have been subjected to continued harassment by multiple state agencies. The false and malicious allegations by the National Commission for the Protection of Child Rights (NCPCR) were definitively countered by the Delhi Commission for the Protection of Child Rights (DCPCR), a statutory body, which has filed a strong affidavit in the Delhi high court, putting an end to the false allegations against CES,” it said.

Signatories of the statement include activist Medha Patkar, economist Jean Dreze, historian Romila Thapar, women’s right activist Kavita Krishnan, among others.
The raids were carried out on Mander’s house in the Vasant Kunj area of Delhi and the offices of the Centre of Equity Studies that he leads. Their searches took place hours after Mander left for Europe for a months-long fellowship programme at Robert Bosch Academy in Berlin, Germany, according to Indian website Scroll.

The critics said they condemned the raids to harass a leading human rights and peace activist who has done nothing but work for peace and harmony.

“We stand with Harsh Mander and with each person associated with the Centre for Equity Studies. The Constitution of India and the law of the land shall prevail, exposing these intimidatory tactics exactly for what they are – an abuse of state institutions to try and curtail all our rights,” the statement said.

Last year, the cops had also raided two children’s homes, with whom Mander had been associated in the past, to probe the alleged financial irregularities.

Mander is known to be a staunch critic of Modi’s Hindu nationalist government. A former Indian Administrative Service officer, Mander left the service after the Gujarat pogroms of 2002. In his writings, he has widely slammed the ruling Bharatiya Janata Party over its handling of the coronavirus crisis, the 2020 Delhi riots and “intensifying attack” on the freedom of the press in India. He was also a prominent voice against the controversial citizenship law, which Modi’s critics say is anti-Muslim. The Modi government, however, rejects the allegation.

Mander currently runs Karwan-e-Mohabbat, a nationwide campaign to back the victims of communal or religiously motivated violence. He has been accused of delivering hate speech during protests against the citizenship law, something he denies.

Earlier this week, Indian actor Sonu Sood, who made the headlines during the coronavirus pandemic for his philanthropic outreach, found himself at the receiving end of raids by the income tax authorities on his premises. Sood was recently roped in by Delhi government as the brand ambassador of its ‘Desh ka mentors’ programme which will help students in making their career choices. The Delhi government is run by the Aam Aadmi Party, led by chief minister Arvind Kejriwal, one of the prominent anti-Modi faces in India.