A BRITISH fashion chain has asked the landlords to slash rents.

In yet another blow to the high street, Quiz has warned that it will close many of its stores unless there was a reduction in rents.

Tarak Ramzan, 66, who leads the chain, said that about half of its store estate had lease expiries within the next 24 months.

Ramzan, who has Pakistani roots, said that “if we don’t get the rents that we want, we are going to be closing stores, we are not going to be running loss-making stores”.

Next, Primark, WH Smith, Ann Summers and River Island are among retailers that have been lobbying landlords for rent cuts.

The company on Wednesday (4) announced an 11 per cent fall in like-for-like shop sales during the half year to September.

The group with 73 standalone stores and 170 concessions reported a fall in sales by five per cent to £63.3 million.

Ramzan’s company, which has issued three profit warnings during the past year, turned into the red with a £6.8 million statutory pre-tax loss, compared with a £3.8m profit a year ago.

Quiz blamed its losses partly on a £7 million non-cash charge after writing down the value of onerous leases.

One of its top executives added that about 20 of its stores were loss-making, equivalent to a third of its estate of standalone stores.

It was noted that as recently as six months ago, Quiz had only six loss-making stores. However, gloomy market conditions had worsened amid shoppers moving to online.

Market observers blame Quiz’s failure to raise its online sales, which has remained at £20m.

Ramzan’s father emigrated from Pakistan during the 1940s. He was a door-to-door salesman in Glasgow before opening a kilt factory.

Later Ramzan pushed the factory into a new business. It was floated in 2007 with a £200m market valuation. 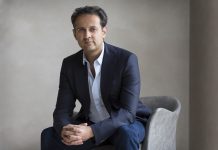