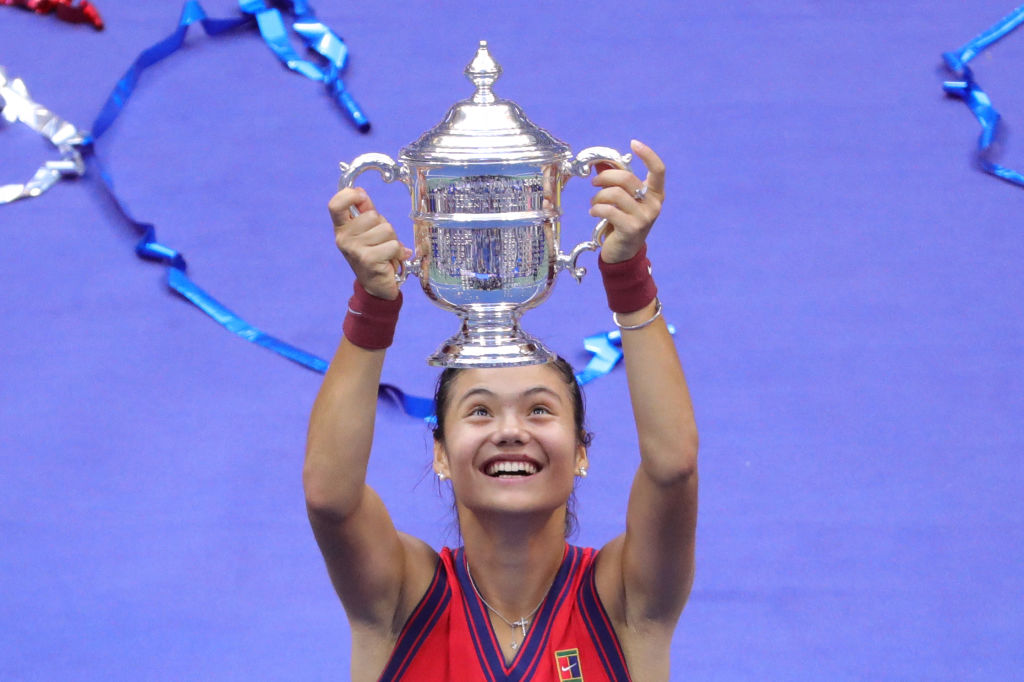 The 18-year-old qualifier made tennis history in New York on Saturday (11).

Raducanu beat 19-year-old Canadian Leylah Fernandez 6-4 6-3 to become Britain’s first women’s Grand Slam singles champion since Virginia Wade at Wimbledon in 1977, and the first player to win a major after coming through a qualifying tournament.

“I send my congratulations to you on your success,” the Queen said. “It is a remarkable achievement at such a young age, and is testament to your hard work and dedication.”

The Express called it “Absolutely Emm-ense!” while the Telegraph proclaimed: “She did it!”

Social media caught fire after Raducanu sealed the win with an ace.

“First time in my life I’ve ever tweeted whilst on air but my goodness what a performance, what a triumph, what an amazing young woman.”

Prime Minister Boris Johnson tweeted: “What a sensational match! Huge congratulations to Emma Raducanu. You showed extraordinary skill, poise and guts and we are all hugely proud of you.”

Raducanu’s only previous Slam appearance, at Wimbledon in July, ended when she pulled out of her fourth-round match after an anxiety attack.

“Look at that bounce back @EmmaRaducanu US Open champion, amazing. Congratulations,” tweeted England and Manchester United footballer Marcus Rashford, who had offered support to Raducanu after her Wimbledon exit.

Raducanu was born in Canada to a Chinese mother and Romanian father, but grew up in Bromley in suburban south London after moving to England at the age of two.

At her former tennis club, Parklangley, members gathered in front of TVs Saturday night to roar her to victory.

Former British number one Tim Henman, who was courtside, said: “She will win more of these, she is that good. This is not some flash in the pan or fairytale. She is playing top-five tennis.”

Australian Grand Slam winner Pat Cash told BBC radio that a qualifier winning a major is “something I never could have believed would happen. It’s mind-boggling.”

And tennis great Martina Navratilova tweeted: “A star is born — Emma Raducanu makes history… and she is just getting started. And will never have to qualify again:)”

In China, where the match took place in the early hours of Sunday, Tencent published an article with pictures of Raducanu visiting China as a child.

“An ethnic Chinese won the US Open” it trumpeted. “She claimed that her motivation (or power) comes from her Chinese mother!”