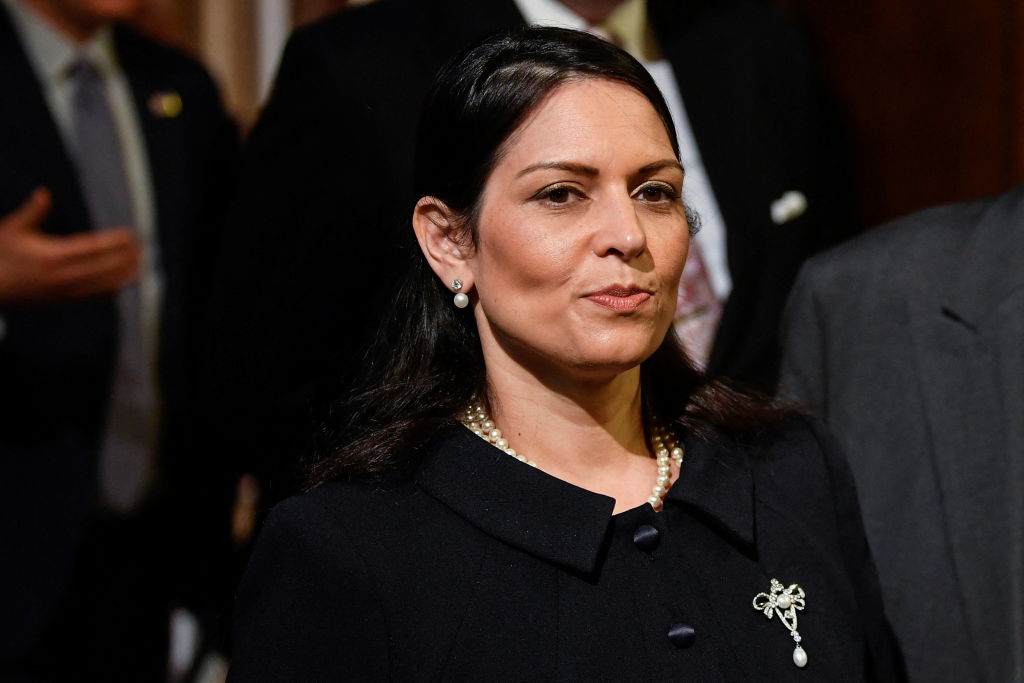 British Home Secretary Priti Patel walks through the Members’ Lobby following the State Opening speech of Parliament in the House of Lords at the Palace of Westminster on May 10, 2022 in London, England. (Photo by Toby Melville – WPA Pool/Getty Images)
Follow Us

IN a major development, the Royal Navy has threatened to ‘walk away’ from Boris Johnson and Priti Patel’s plan to end Channel crossings, according to a report.

The Guardian reported that defence chiefs are unhappy over the rapidly imploding plan of using the military to control small boats in the Channel.

Data shows crossings have close to doubled since the military was given “primacy” over the issue from mid-April.

The report added that both Patel and Johnson were warned that deploying the Royal Navy would be likely to increase the number of crossings. However, they ignored expert advice.

Senior Home Office sources have admitted the UK could receive up to 60,000 people by small boat this year – double last year’s record – with another 20,000 arriving by different routes.

Patel will face the home affairs select committee this week on Channel crossings. Though the government has spent significant sums trying to remove asylum seekers to east Africa, but has yet to deport a single person.

Defence chiefs hope Johnson’s resignation is an opportunity to scrap the Channel initiative as it also ties up resources at a time of escalating international security threats.

Tobias Ellwood, Conservative chair of the influential defence committee, has said that the MoD really wants to walk away from the plan with the resignation of Johnson. According to him, the plan is a complete waste of naval time, as it is already overstretched.

John Spellar, the Labour vice-chair of the defence committee and a former defence minister, said the scheme had effectively reduced the navy to a ‘taxi service’.

The armed forces minister James Heappey will be questioned by the committee over the operation’s predicted and actual lack of operational effectiveness.

It is reported that when the Home Office and MoD were asked about the legal basis for the military’s involvement in the Channel under Operation Isotrope, neither would answer.

It is also understood that the national security council, the main forum for collective discussion of the government’s objectives for national security, was not consulted before Isotrope was announced.

In May, 2,871 migrants were apprehended crossing the Channel by small boat compared with 1,627 in May 2021, a 75 per cent increase. Similarly, during the first three months of 2022, 4,540 people were detected arriving by small boats compared with 7,432 during the last half of April, May and June after the MoD took over.

Enver Solomon, chief executive of the Refugee Council, said the use of the navy had been proved to be futile.

Meanwhile, a Home Office spokesperson said that the government is united in tackling illegal migration and saving lives, to suggest otherwise is misleading and incorrect.