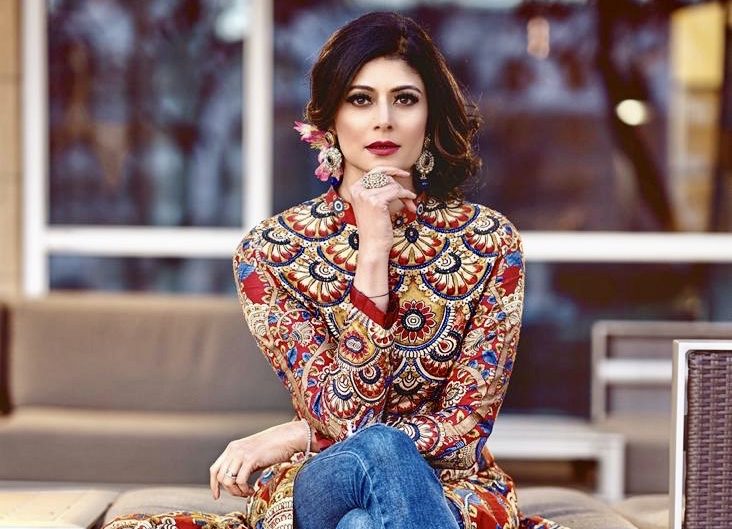 THE FORMER BOLLYWOOD SCREEN QUEEN ON HER RETURN, NEW PROJECTS AND SURVIVING AS AN OUTSIDER IN FILMS

BEAUTY QUEEN turned actress Pooja Batra had a successful career in Indian cinema and delivered winning performances in multiple languages, but then left it all behind after she got married to someone based in USA.

Later, the popular star recommenced her acting career and reconnected with the camera in India after she got separated. Now, instead of surrendering herself to commercial cinema, Pooja has entered an exciting new phase of her career where she is exploring new acting frontiers.

Happily married again and doing things on her own terms, she recently starred in short film Padmavyuha and America feature Draupadi Unleashed.

With more projects on the way, including Bollywood entertainer Squad, Pooja Batra is enjoying life and was happy to speak to Eastern Eye about her interesting acting journey and future hopes. She also spoke about surviving as an outsider in Bollywood and key changes the Indian film industry needs to make.

How do you look back on your journey as an actor?
I would say I was blessed to be a part of such amazing movies and had the privilege of working with amazing co-stars, superb directors and great technicians.

Which of your characters would you say is closest to your heart?
My role in Virasat, Chandralekha and One Under The Sun, where I got to play an astronaut, are closest to my heart.

Which role challenged you the most?
The role that challenged me the most was Noorjehan in Taj Mahal: An Eternal Love Story. Mohini in Draupadi Unleashed, which has been playing in theatres in the US, has also been an interesting challenge.

You have worked with some incredible people, but who has been the most memorable co-actor?
Amrish Puri in Virasat, definitely! Also, Lalita Pawar and Om Puri in Bhai – she played my grandmother and he portrayed my father in the film. Also, Mohanlal in Chandralekha!

Do you regret stepping away from Bollywood and moving to America?
Yes and no! Yes, because I would have been a part of many more projects had I been in India and no, because now I have the confidence, after having trained and worked in Hollywood. I know now that I have what it takes.

What did you most miss about movies when you didn’t do them?
I missed the vastness of the projects. Movies are movies! The pampering of actors, just being on set, having to dress up and playing in a make-believe world are some of the things I missed.

Tell us about your short film Padmavyuha and the character you play?
Padmavyuha is an exploration of faith and morality. It is also a story of a second-generation Indian looking for his roots, which is a very common phenomenon for people, who at some point or the other go looking for their roots. I play professor Anjali Mudra who is immersed in researching the origins of Hinduism and then she goes incognito; nobody knows if she is murdered, kidnapped, held hostage or in captivity.

What made you want to be part of a short film?
This is the first short film I’ve done in my entire acting career. My US manager had called me to let me know that there was an offer from Raj Krishna for me and that he had me in mind for the role of professor Anjali Mudra, when he penned the story. Plus, I wanted to be a part of a project that I could remember in the years, to have done it, when the whole world was under lockdown 2020.

What was the biggest challenge of playing this role?
The challenge was that I could be a part of it by sitting in India while Raj and his team were in California (US). It was a work-from-home job.

Who are you hoping connects with the film Padmavyuha?
All the second generation Indians born outside India and everyone who is looking to find their roots.

What has the response to the film been like at festivals?
It has done tremendously in international festivals. It has now gone to over eight festivals in the US and Canada.

There has been a lot of talk about Bollywood being tough on outsiders and nepotistic. How did you survive it and do so well?
I survived it because the survival of the fittest is the number one law of nature. You just have to keep the faith, and most importantly, keep honing your craft because acting is a huge canvas with a constant scope for improvement.

What does the India film industry need to change about itself?
The industry actually needs to get a powerful guild for the actors that actually fights for actors’ rights, integrity, payments and makes sure that residuals are levied in India. It’s high time actors are also a part of revenues after the movie is released and re-aired. Also equalise payments for both genders. Reduce the discrepancy of payments and treatments from one actor to another. Have medical benefits for actors, especially those without work. Have homes and welfare for veteran actors that were not A-listers, so that they are not dying without basic needs in their old age.

What would be your dream role?
My dream role will be to do Star Wars, Matrix, Wonder Woman, Game Of Thrones, play an Indian sports star, a CEO or an army officer. I like playing empowering roles.

What can we expect next from you in terms of films?
I’m playing a witch in Hexengeddon and a special agent in Squad.

Today, what inspires you?
Dignity, integrity, education and what you give back rather than hoarding.

Why do you love being an actor?
I love living different lives vicariously through the craft. No two days are the same in my profession, other than the existential daily routines.

Why should we watch Padmavyuha?
It is beautifully written and visualised by Raj Krishna. It is very well acted by Nick Prakash. It is an official selection in multiple international film festivals. It’s Da Vinci Code meets with Hinduism. It’s terrifically directed by Raj. This is his first movie, and he along with his team were on point, me included.