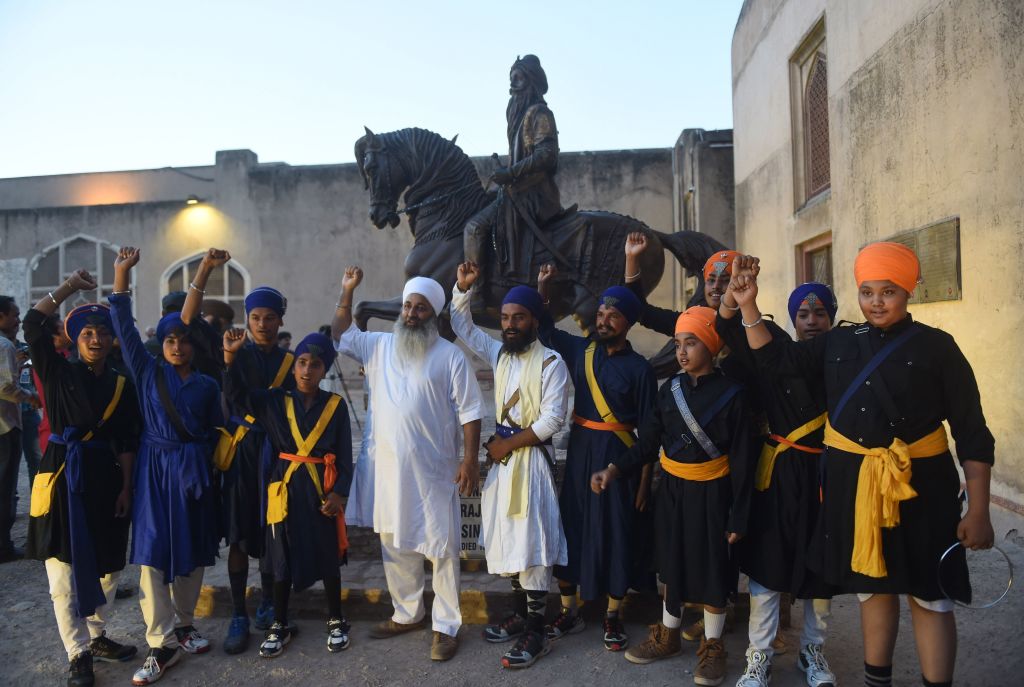 In this file photo, Pakistani Sikhs gesture in front of the statue of Maharaja Ranjit Singh, leader of the erstwhile Sikh empire, on June 27, 2019, at the Lahore fort. (Photo by ARIF ALI/AFP via Getty Images)

THE Sikh community in Pakistan has said that it would bring the statue of first Sikh ruler Maharaja Ranjit Singh, installed at the Lahore Fort, to Peshawar if the authorities in Punjab province cannot protect it.

A nine-foot-tall cold bronze statue of Ranjit Singh was on Tuesday (17) vandalised by an activist of the banned Tehreek-e-Labbaik Pakistan (TLP).

In a viral video, the man, who has been arrested, could be seen chanting slogans, breaking the arm of the statue and dismantling Ranjit Singh’s bust from the horse and throwing it on the ground before being pulled by another man.

Gorpal Singh, the leader of the Sikh community in Peshawar, on Tuesday (17) said they would bring the statue to their city if the Punjab government cannot protect it from miscreants.

Singh said that a delegation of Sikhs would go to Lahore, the capital of Punjab, to bring the statue to Peshawar.

The Punjab government should avoid displaying the statue of Ranjit Singh time and again if it could not protect it, he said.

He said that a picture of Ranjit Singh was put on display at the Historic Balahisar Fort in Peshawar around six years back and till date, no damage had been done to it, while the Punjab government could not protect a single statue.

Singh said the frequent attacks on the statue hurt the community’s sentiments. This is not the first time that the statue has been targeted. The arm of the statue was broken last year. It was also damaged in August 2019 by two young men.

Ranjit Singh was the founder of the Sikh Empire, which ruled the northwest Indian subcontinent in the early half of the 19th century. The statue shows the Sikh emperor sitting on a horse, sword in hand, complete in Sikh attire.

Sculpted by local artists, under the aegis of the Fakir Khana Museum, the statue is meant to invoke the feeling of the emperor being present, with its real-life proportions, and was unveiled on his 180th death anniversary. Ranjit Singh passed away in 1839.