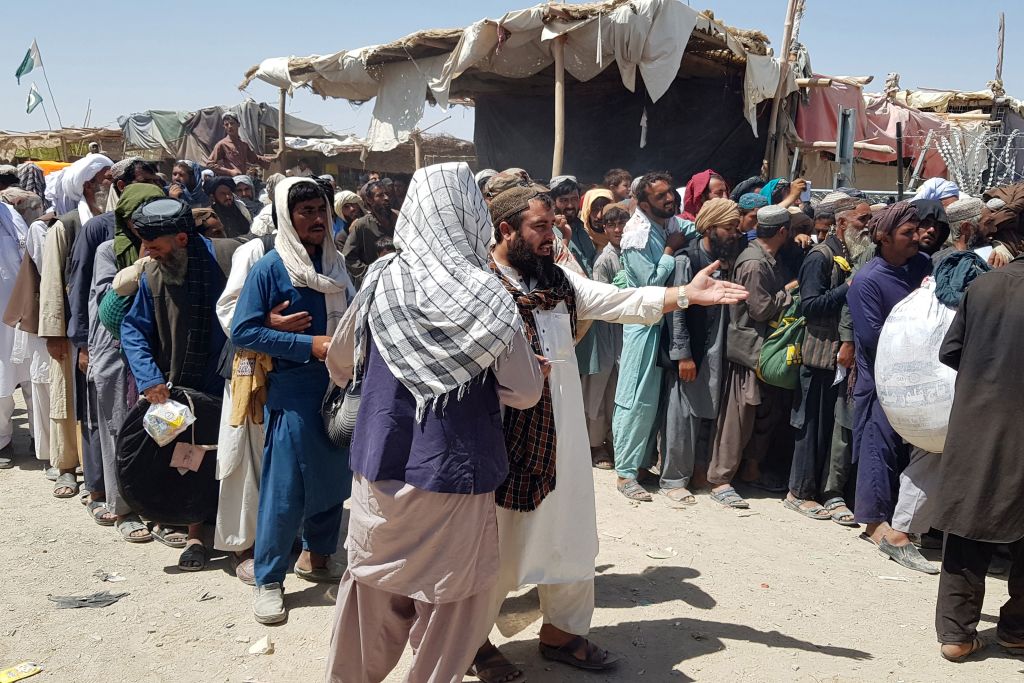 Stranded Afghan nationals stand in queues as they wait for the reopening of the Pakistan-Afghanistan border crossing point in Chaman on August 13, 2021 (Photo by AFP via Getty Images)

PAKISTANI forces clashed on Thursday (12) with hundreds of Afghans stranded on Pakistan’s side of a commercially vital border crossing with Afghanistan after its closure by Taliban insurgents, Pakistani security officials said.

The disturbances broke out after a 56-year-old Afghan traveller died of a heart attack as he waited in the dusty heat to enter Afghanistan via the Chaman-Spin Boldak crossing, Arif Kakar, a Pakistani official on the scene, said.

Protesters carried his body to a local Pakistani government office, demanding that the border be reopened. Some began throwing stones at security forces, who responded by firing tear gas and charging the protesters with batons to disperse them. No injuries were reported.

The Taliban, who captured the crossing last month as part of a major advance across Afghanistan as US-led foreign forces withdraw, announced its closure on August 6 in protest against a Pakistani decision to end visa-free travel for Afghans.

The hardline Islamist Taliban are demanding that Pakistan allow Afghans to cross the frontier with either an Afghan ID card or a Pakistani-issued refugee registration card.

Taliban fighters have rapidly taken territory from the Kabul government in recent weeks, including important border crossings with Iran and Central Asian countries that now provide significant customs revenue for the group.

Some 900 trucks went through the Chaman-Spin Boldak crossing daily before the Taliban seized it.

Opening the border with Pakistan for visa-free travel would not only help the Taliban curry favour from ordinary Afghans but also shore up a route to areas of Pakistan that have housed Taliban fighters and some commanders.

Pakistan and the Taliban long maintained good relations though Islamabad says this ended after the 2001 US-led invasion of Afghanistan that ousted the radical Islamists from power for having sheltered al Qaeda militants who carried out the September 11 attacks on the United States.

Western capitals and the Kabul government say Pakistani support to the Taliban continues and many of its leaders enjoy safe haven in the country, something Islamabad denies.