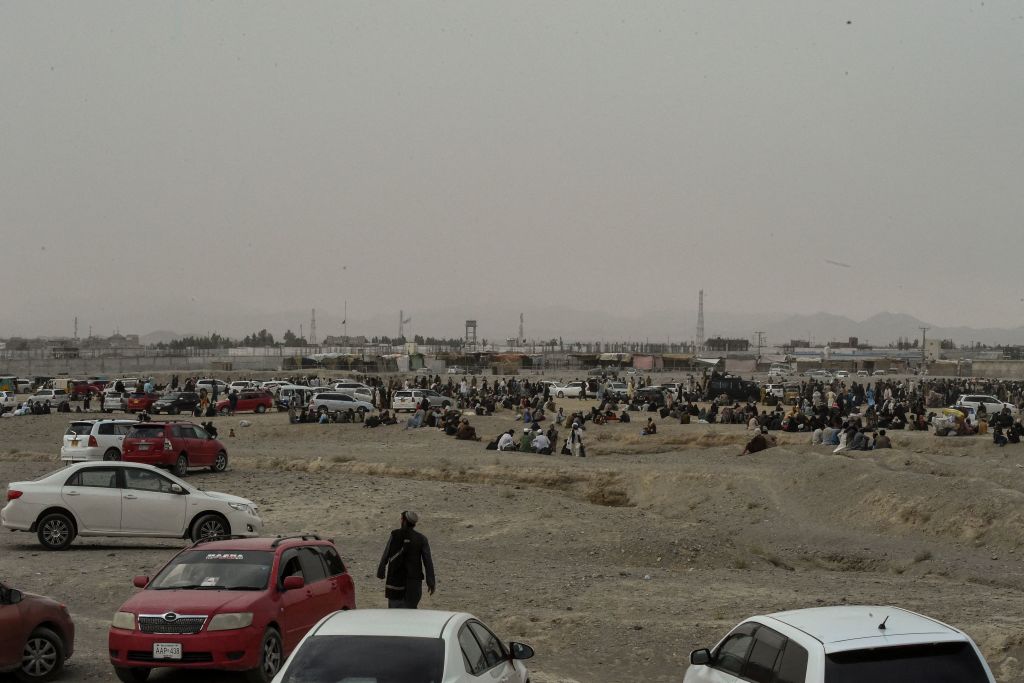 Stranded people wait for the reopening of the border crossing point in Pakistan’s town of Chaman on July 16, 2021, following clashes between Afghan forces and Taliban fighters in Spin Boldak to retake the key border crossing. (Photo by BANARAS KHAN/AFP via Getty Images)

PAKISTAN has reopened a major southwestern border crossing with Afghanistan that is currently under Taliban control on the Afghan side, Pakistani customs officials said.

The measure allowed more than 100 trucks carrying goods to cross into Afghanistan.

The Chaman-Spin Boldak crossing, a key port for a landlocked Afghanistan, had been closed by Pakistan for commercial traffic since fierce fighting for the control of the crossing erupted between Taliban insurgents and Afghan security forces earlier this month.

“Pakistan has opened its border with Afghanistan at Chaman today and resumed Afghan transit trade which was suspended for the past one month,” Arif Kakar, a senior official of the Chaman border district, said on Monday (26). He said it would remain open six days a week.

Two Pakistani customs officials, requesting anonymity, said Spin Boldak and the border town of Wesh were still under Taliban control, and they did not know what arrangements were in place across the border or who was clearing the goods through customs.

They said Pakistani officials were under pressure from traders to let trucks pass through as the goods they were carrying would otherwise perish.

Afghanistan’s interior and finance ministries, and the Taliban spokesman, did not respond to requests for comments.

US Marine general Kenneth McKenzie, head of US Central Command, which oversees American forces in Afghanistan, told reporters in Kabul on Sunday (25) that Spin Boldak was a “contested space” and the Afghan government was looking to regain control of it.

Hundreds of Afghan soldiers and civil officials have fled to neighbouring Tajikistan, Iran and Pakistan in recent weeks after Taliban offensives in border areas.