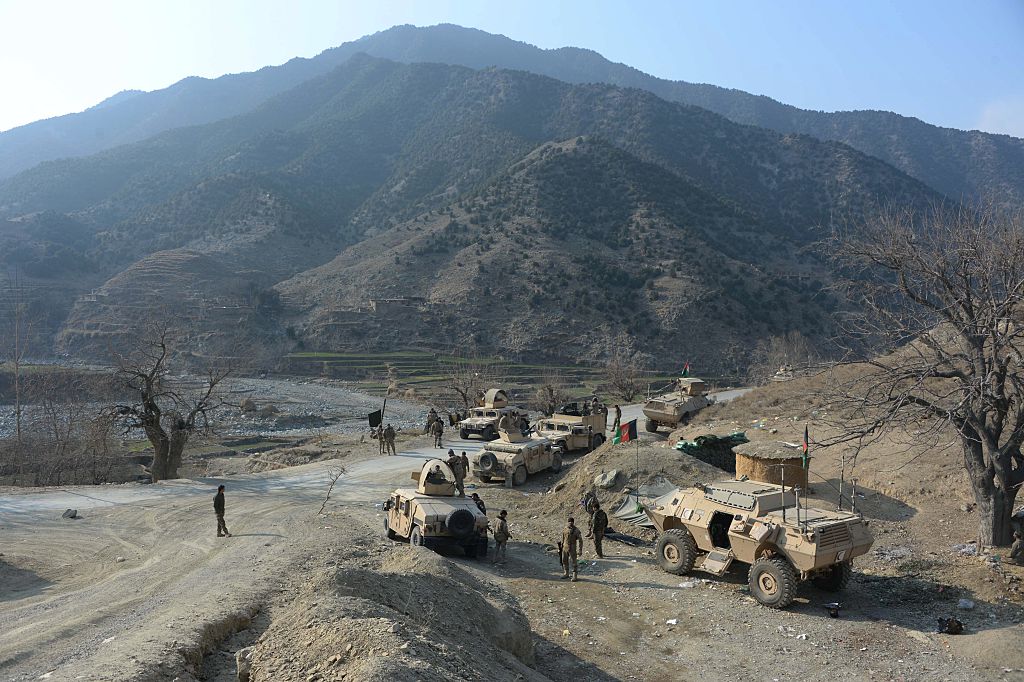 A file photo of Afghan security personnel patrolling near the Pakistan-Afghanistan border in Afghanistan’s eastern Kunar province. (Photo by Noorullah Shirzada/AFP via Getty Images)
Follow Us

PAKISTAN on Sunday (17) called on the Taliban government in Kabul to take “stern actions” against militants launching attacks against the country from inside Afghanistan, a day after alleged rocket attacks by the Pakistani military killed six Afghans.

Border tensions between Pakistan and Afghanistan have risen since the Taliban seized power last year, with Islamabad claiming militant groups are carrying out regular attacks from Afghan soil.

The Taliban deny harbouring Pakistani militants but are also infuriated by a fence Islamabad is erecting along their 2,700-kilometre (1,600-mile) border.

Fresh tension erupted after five children and a woman were killed in Afghanistan’s eastern province of Kunar on Saturday (16) in alleged rocket attacks that Afghan officials blamed on the Pakistani military.

While the Pakistani military has not confirmed whether it carried out the assault, Islamabad insisted it was facing continuous “terrorist” attacks from across the border.

“Pakistan, once again, strongly condemns terrorists operating with impunity from Afghan soil to carry out activities in Pakistan,” the foreign ministry said in a statement on Sunday.

“Pakistan requests the sovereign Government of Afghanistan to secure Pakistan-Afghan Border region and take stern actions against the individuals involved in terrorist activities in Pakistan.”

Seven Pakistani soldiers were killed in the North Waziristan district on Thursday (14) by “terrorists operating from Afghanistan”, the ministry said.

“Unfortunately, elements of banned terrorist groups in the border region, including TTP, have continued to attack Pakistan’s border security posts, resulting in the martyrdom of several Pakistani troops.”

Areas along the border have long been a stronghold for militant groups such as the Tehreek-e-Taliban Pakistan (TTP), which operates across the porous frontier with Afghanistan.

The Afghan Taliban and the TTP are separate groups in both countries, but share a common ideology and draw from people who live on either side of the border.

“This is a cruelty and it is paving the way for enmity between Afghanistan and Pakistan,” Taliban government spokesman Zabihullah Mujahid said late on Saturday.

“The Pakistani side should know that if a war starts it will not be in the interest of any side.”