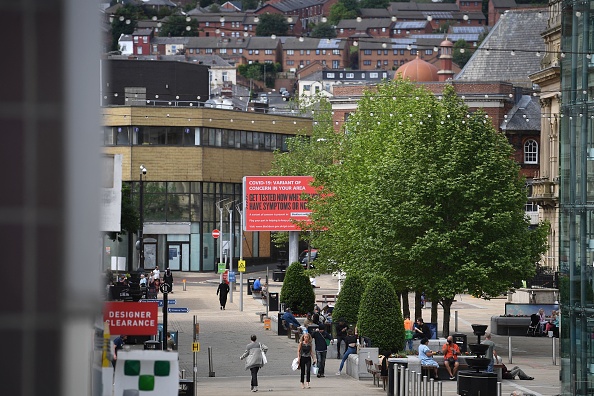 Pedestrians walk past an electronic information board displaying a Covid-19 information relating to a ‘variant of concern in the area’ in Blackburn, north west England on June 16, 2021. – The UK government on Monday announced a four-week delay to the full lifting of coronavirus restrictions in England due to a surge in infections caused by Delta, which first appeared in India. (Photo by Oli SCARFF / AFP) (Photo by OLI SCARFF/AFP via Getty Images)

PEOPLE in Britain aged 21 and over can now book their Covid vaccine. The news comes amid a reported shortage of the Pfizer shots which may slow down the vaccine drive while the latest figures show infections are falling steadily in Blackburn, England’s worst-affected council area.

Around one million people aged 21 and 22 will begin to be called forward on Wednesday (16) to book their coronavirus vaccine, as the vaccination programme expanded the age-based rollout to cover further younger categories, leaving only over-18s who are expected to be called by end of this week.

Urging people above 21 to get their shots, health secretary Matt Hancock said “we are almost at the final hurdle of offering life-saving jabs to all UK adults”.

However, the supplies of the Pfizer jab to virus hotspots where Covid case rates are rising in younger age groups have been cut, as per a Telegraph report on Wednesday (16).

Citing a leaked letter, the report says that vaccine supplies are so short that NHS bosses at Derbyshire Community Health Services NHS Foundation Trust have told staff and volunteers at the Derby Arena centre that they may not be needed to come into work “because of limited supplies”. The supply is expected to replenish in July, as per the report.

Meanwhile, the latest figures show that more than half of UK adults, over 30 million people, have had their second dose of the Covid vaccine, while almost four in five had been given a single dose.

The country has reported 7, 673 new cases and 10 new deaths with Blackburn, Lancashire and Greater Manchester continuing to be hotspots with relatively high numbers that are said to be driven by “60 per cent more transmissible” delta variant.

However, the rate of increase is now slowing down in Blackburn with Darwen indicating that the cases have peaked in the area. The area has England’s highest infection rate as per Public Health England figures.

“The support we have had in surge testing and extra vaccinations for over-18s over the last four weeks is having an impact,” a joint statement by Blackburn with Darwen council leaders said, adding that rate of increase is now slowing, and “we expect to see this improve until our case rates eventually plateau, and then begin to decline”.

However, the delta variant continues to smash Briton plans as it is now the dominant strain in several UK staycation hotspots, including Cornwall and Canterbury in Kent and Lancashire.

Since many favourite foreign destinations are on the amber or red list, more Britons are reportedly looking for places closer home for this summer. Cornwall- which was reportedly expecting 400,000 guests- and Lancashire- another popular summer destination with its rugged beauty and beaches- reportedly have more than 80 per cent delta variant cases.