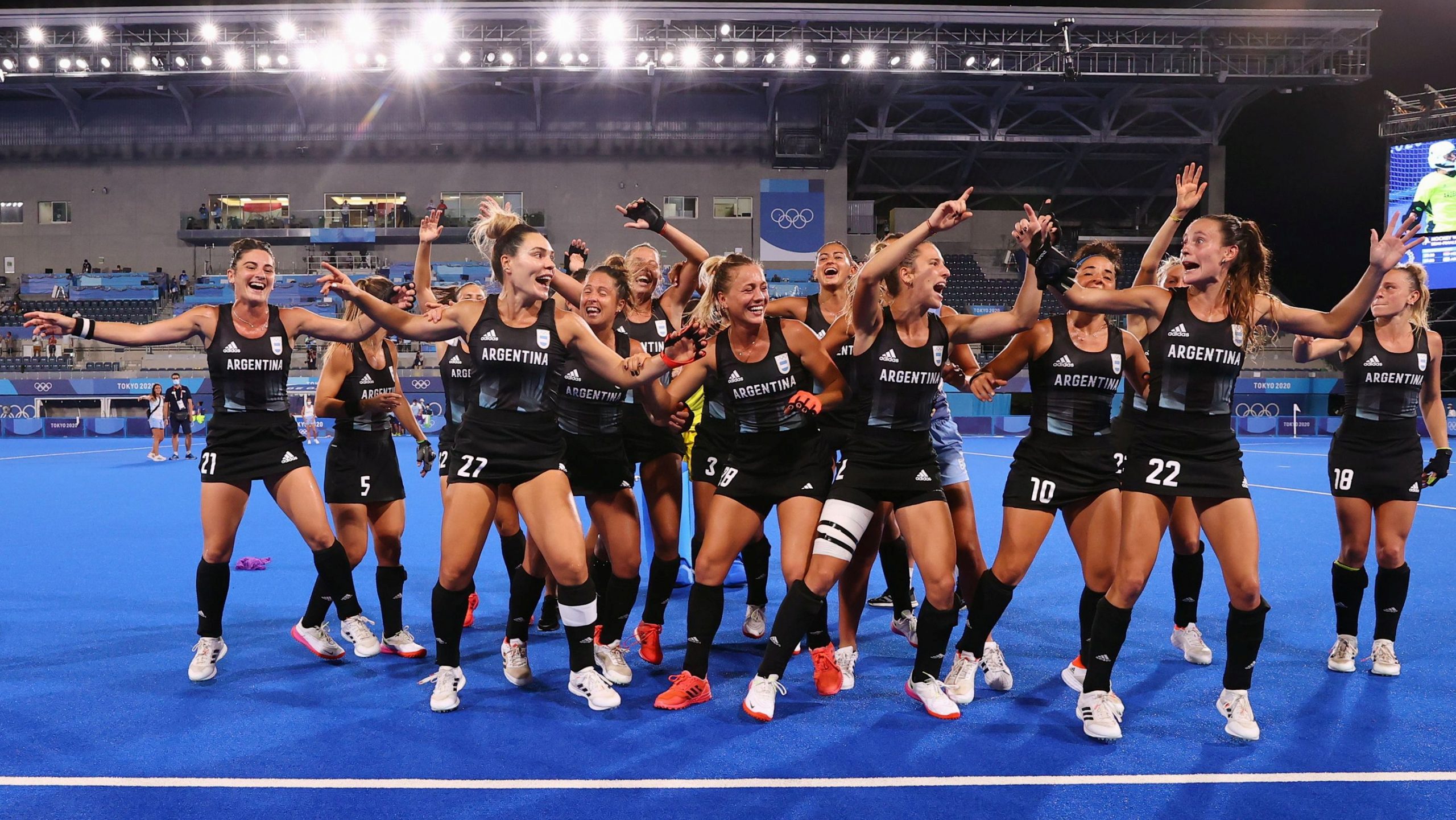 Players of Argentina celebrate after winning their semifinal match against India. (REUTERS/Bernadett Szabo)

ARGENTINA’S players hugged each other and cried after reaching the women’s hockey final at the Tokyo Olympics with a 2-1 win over India on Wednesday (4).

Argentina will now face the Netherlands in Friday’s (6) final, while India will battle Britain for bronze.

“We’re very happy. We were looking for this with the team,” Argentina veteran Delfina Merino said.

Argentina suffered an early setback, conceding a second-minute goal when India’s Gurjit Kaur flicked the ball into the goal off a penalty corner.

Las Leonas equalised halfway through the first half when captain Maria Noel Barrionuevo also scored off a penalty corner. The 37-year-old, Argentina’s oldest player, settled the match six minutes into the second half.

India head coach Sjoerd Marijne conceded that Argentina had created the best opportunities in the match.

“I can’t be angry at the girls (India’s players) because we don’t play these matches a lot. It’s a whole new experience,” Marijne said.

In the other semifinal, the Netherlands notched up a convincing 5-1 victory over 2016 Rio Olympic champions Britain to reach the Olympic finals for a fifth straight time.

The Netherlands took the lead in the first half when Laurien Leurink outsmarted her opponent and her pass reached 21-year-old forward Felice Albers who shot the ball through the legs of British goalie Madeleine Hinch.

The Netherlands, who won silver in Rio after taking home the top prize at the 2008 and 2012 Olympics, doubled the score less than a minute later through a powerful shot by Marloes Keetels.

“We trained for five years on being able to score many goals… I think that’s paying off now,” said Keetels, who also played a key role in the first goal by getting the ball to Leurink with a long pass.

The Netherlands had already scored 21 goals before starting the semi-finals while conceding only two.

After the halftime break, the Netherlands extended their lead to 4-0 with goals by Maria Verschoor and Albers.

Britain had beaten the Dutch in a penalty shootout in the Rio final but, here, the gap between the two sides was too large for the British to overcome, though they got a goal back when Giselle Ansley flicked in a penalty corner before Frederique Matla made it 5-1 for the Netherlands.

Friday’s match will give Argentina a chance to take revenge against the Dutch for their defeat in the final of the 2012 Olympics, when the Netherlands won 2-0.