Milan Paul Kumar was awarded the ‘British Citizen Award 2021’ for charitable fundraising to support children and families most affected by Covid-19 pandemic. 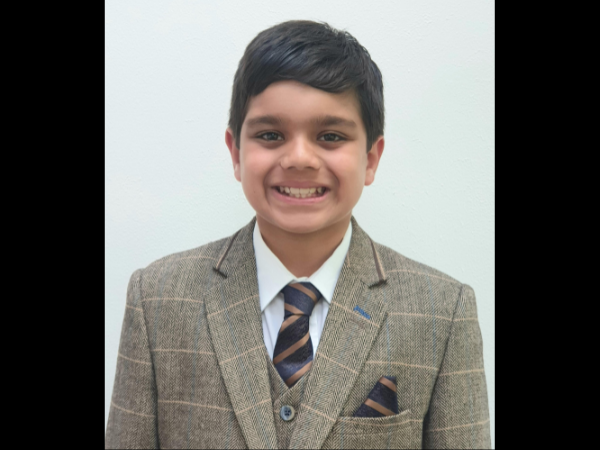 NINE-year-old Milan Paul Kumar from Bolton has been recognised with the highest accolade a young person can achieve for social action or humanitarian efforts – The Diana Award.

Established in the memory of Diana, the Princess of Wales, the award is given by the charity by the same name and has the support of both the sons of the late member of the British royal family – Prince William, the Duke of Cambridge, and Prince Harry, the Duke of Sussex.

Milan was awarded the ‘British Citizen Award 2021’ for charitable fundraising to support children and families most affected by Covid-19 pandemic.

During the first lockdown, he read 50 books in 3 months and was inspired to join the ‘National Literacy Trust’, where for 10 days he cycled 50 laps of the University of Bolton Stadium.

The boy completed another challenge in 2021 which involved five days of hiking, cycling and skiing. He wrote and self-published his own book – ‘Covid Christmas Parade’ — with all proceeds going to the charity, and was congratulated by the British prime minister.

In a congratulatory message to Milan, Prince William said, “Congratulations on receiving The Diana Award today! You are part of an inspirational generation of young people who are changing the world through your actions, and I hugely admire your efforts.

“Your stories are remarkable. Many of you face huge challenges in the face of difficult times, yet you are tirelessly breaking down barriers to create a better future for us all.
Thank you for your compassion, bravery and absolute determination. You truly are the personification of my mother’s legacy and I know she would be so proud of you all. I believe there’s no better way to celebrate her life and work than through recognising incredible people who dedicate so much time and effort to helping those around them.

I hope that you stand proud in the knowledge that you are making a real difference and that you enjoy today’s ceremony — you deserve it!”

Prince Harry said, “I wanted to reach out directly to share how inspiring it’s been to read your stories, speak to you, and learn about the work you’re doing day in and day out to strengthen your communities – and because of that, strengthen the world.

“We are in awe of everything you’ve already accomplished and know you have what it takes to continue developing into the changemakers who will shape our collective future. Even as young leaders, your impact is immeasurable, and we need you more than ever!

“The Diana Award is a special honour, and one you have worked so hard to earn. As I said while hosting this year’s event, I see my mother’s legacy reflected in this community and its work – in your work. She would be so proud to see what you and your generation are accomplishing. She always understood what young people could do, which is so much, especially when given the right support and investment.

“I’m genuinely grateful to be part of the Diana Award family.

“Never forget that you are making the world a better place. Keep up the good work, because we all need – and all benefit from – the energy, passion, creativity, and care that you bring to everything you do.”

Tessy Ojo CBE, chief executive officer, The Diana Award, said, “We warmly congratulate our new Diana Award recipients from the UK and across the world who are changemakers for their generation. It is especially poignant as we remember Princess Diana twenty-five years on. We know by receiving this honour they will inspire more young people to get involved in their communities and begin their own journey as active citizens.”

Recipients of the prestigious award are forwarded by adults who know the young people in a professional capacity and recognise their efforts as a positive contribution to society. These nominators had to demonstrate the nominee’s impact in five key areas — Vision, Social Impact, Inspiring Others, Youth Leadership, and Service Journey — through a rigorous nomination process.