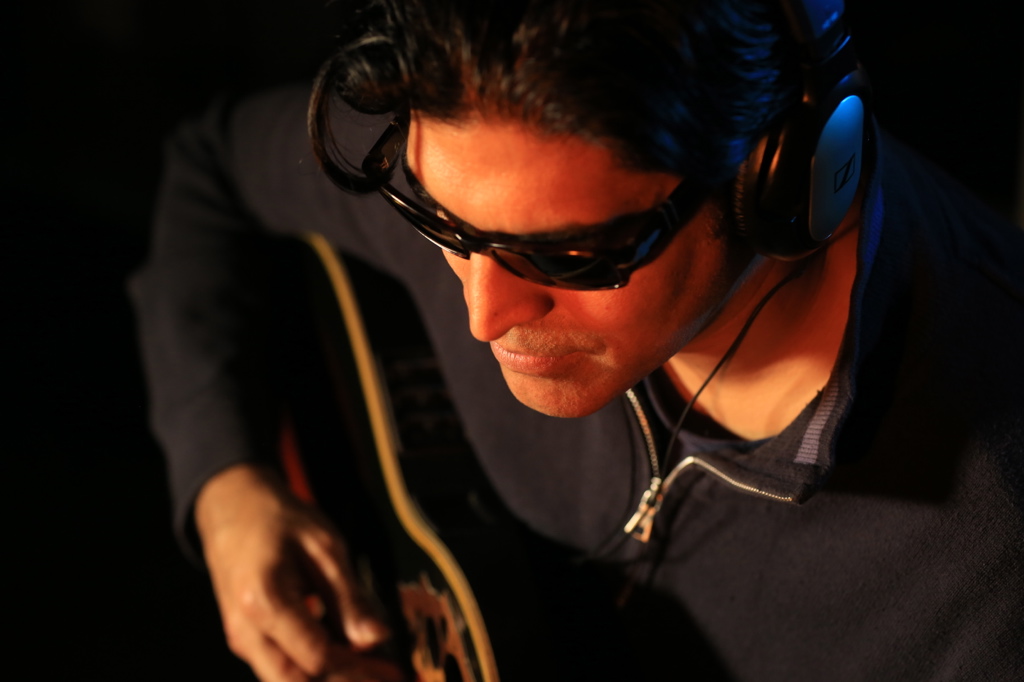 BORN in India and based in Houston, USA, singer, songwriter and guitarist Nonviolenze has combined his love for music with a natural talent for art.

He has united these elements for his new album Ghosts Of War by creating a powerful painting for each song, for a complete audiovisual experience. Real name Shri Baratan, he combines rock, jazz, pop and blues with his three-octave vocal range.

Eastern Eye got him to select 10 songs he loves.

Kashmir by Led Zeppelin: It’s a unique authentic rock progression from Jimmy Page with an unusual rhythmic pattern, accompanying all time greatest rock vocalist Robert Plant. His vocal style sees no boundaries and is free. This song reminds me of breaking free from the mundane and soaring high above tall mountains of the world.

Owner Of The Lonely Heart by Yes: All time great rock vocalist Jon Anderson’s timeless voice journeys you into new frontiers. The catchy beat and progressive rock progression keep you on your toes. I love songs that hold you in suspense till the end.

Bohemian Rhapsody by Queen: The eternal voice of Freddy Mercury captures your soul as he sings this nostalgic melody. Mercury’s trained classical style of singing rock put him in a class above the rest. His ability to fuse rock with classical music and his vibrant choruses with layered harmonies are something that very few can replicate.

Us And Them by Pink Floyd: The everlasting music of my favourite band Pink Floyd. This is a haunting melody that tells the age-old story of division. The album Dark Side Of The Moon is one of the best ever to be produced.

Another Brick In The Wall by Pink Floyd: Probably the best rock album that ever released was The Wall by Pink Floyd. Even today, the compositions and sounds they achieved are unparalleled. This was a perfect band until they split and Roger Waters went his way – the saddest day for progressive rock music.

Matrix by Nonviolenze: I love songs that tell stories. This one is about the corporate world. In a complex matrix, we live, as members of a nation, religion, class or profession. Born into a square in the matrix, migrating to another is impossible. The boundaries are closely guarded. The prosperous are territorial. To climb the pyramid and reach the pinnacle, one must endure the rat race. All eyes are on the fortune. Abundance is in the hands of a few. Those at the top guard the keys to the treasury.

Tom Sawyer by Rush: This incredible rock song is brilliantly constructed and features one of the best drummers, Neil Peart, that walked the face of the earth. The lead and bass guitar work are unforgettable. The song maintains a super energetic beat and builds us to a crescendo before crossing the finish line.

Ghosts of War by Nonviolenze: I believe songs can powerfully convey messages and propel people into action. Ghosts Of War is a melody in D-major that quickly progresses into a powerful jazz-rock progression in E-minor to express how a perfectly happy life can degenerate into the tragedy of war based on differences in faith.

Face to Face by Shakti: One of my favourite jazz guitarists, John McLaughlin’s performance on the album Natural Elements by Shakti is inexplicable. Face to Face is one of my all time favourite jazz fusion instrumentals. This is a really must listen song.