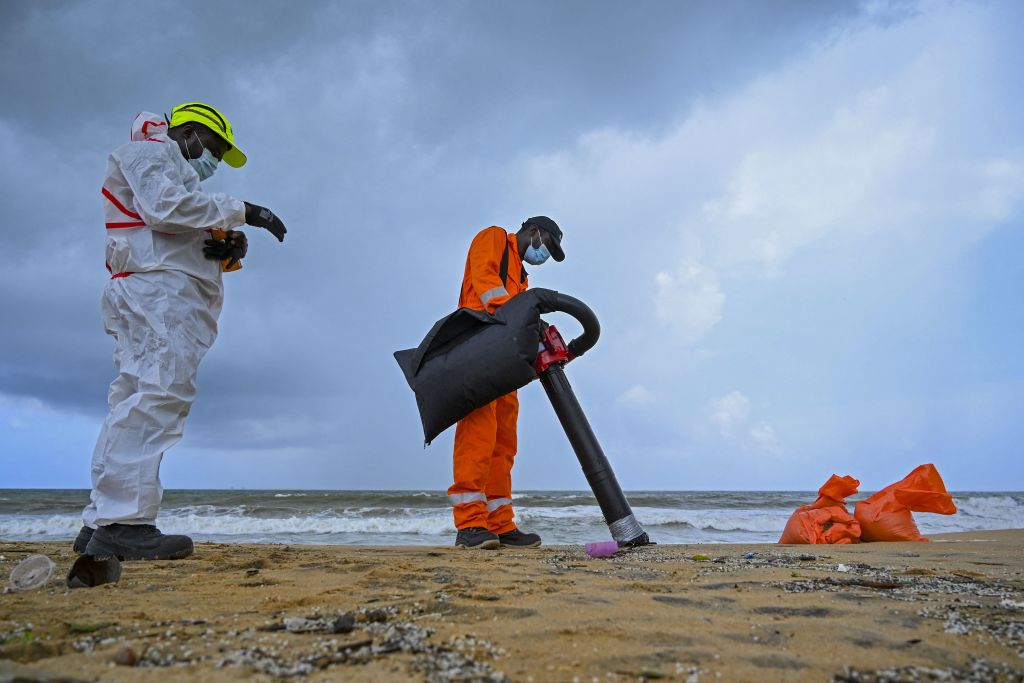 UK-based Oil Spill Response experts look for pollutants from the Singapore-registered container ship MV X-Press Pearl, which is sinking after burning for almost two weeks in the sea off Colombo Harbour, at Sarakkuwa beach, north of Sri Lanka’s capital Colombo on June 10, 2021. (Photo by ISHARA S. KODIKARA/AFP via Getty Images)

SRI LANKA announced an investigation on Thursday (10) into a possible oil slick reported off its west coast where a container ship submerged after burning for 13 days.

“I visited the area by boat yesterday and what we noticed was a thin film of oil which looked like diesel,” Godahewa told reporters in Colombo. “It did not look like bunker oil, but we have asked our experts to examine it.”

The X-Press Pearl reported an onboard acid leak and caught fire just as it was due to enter the Colombo harbour on May 20.

The fire was put out after 13 days, but the vessel’s stern hit the bottom of the shallow sea when a tug attempted to move it to deeper waters.

Authorities are bracing for a possible oil spill from the submerged wreck with almost 300 tons of bunker oil thought to be still in its fuel tanks.

The owners of the vessel have already deployed representatives from the International Tankers Owners Pollution Federation (ITOPF) and Oil Spill Response (OSR) to monitor any oil spill and help with the clean-up of beaches.

Godahewa said five vessels, including two Indian Coast Guard ships equipped to deal with oil spills, were anchored around the sinking vessel, but none reported a leakage from the submerged wreck.

Tons of microplastic granules from the ship swamped an 80-kilometre (50-mile) stretch of the beach declared off-limits for residents. Fishing in the area has been banned.

Sri Lankan environmentalists last week sued the government and the ship’s operators for allegedly failing to prevent what they called the “worst marine disaster” in the country’s history.